“I am a proud Jew,” declared Defense Minister Naftali Bennett on Israel Army Radio earlier this week, raising the question of why a senior government minister feels the need to state the obvious? Or is it so obvious?

Bennett was reacting to a decision by Tel Aviv Mayor Ron Huldai that was perceived as a ban on “tefillin booths” that encourage male Jewish passersby to lay phylacteries in accordance with Deuteronomy 6:8.

Though Huldai tried to explain that his goal was merely to distance these booths from schools, many saw it as another step toward stripping Israel of its Jewish character. Following Huldai’s decision, Boaz Golan, founder of the online news portal 0404, launched “Operation Ron” calling on Jews from around the world to lay tefillin. According to 0404, thousands of Jews who don’t normally adhere to this particular practice answered that call.

Huldai subsequently cried foul, accusing right-wingers of cynical spin in service to their election campaigns. And in this case, he might be right. However, his other recent decision to remove large signs promoting the “Israel Victory Project”1 from the streets and highways of Tel Aviv demonstrates that the mayor does identify with far-left of Israeli politics that seeks to turn the nation into a non-Jewish democratic state.

The sign that angered Huldai features Palestinian Authority chief Mahmoud Abbas and Hamas leader Ismail Haniyeh blindfolded and on their knees against an apocalyptic background. The text reads, “Peace is made only with defeated enemies,” itself a reaction to former Prime Minister Yitzhak Rabin’s slogan that “you don’t make peace with friends. You make it with very unsavory enemies.” Rabin said that in the context of committing Israel to the “Oslo Accords,” which opponents say sapped Israel of its will to defeat its enemies in all subsequent confrontations. 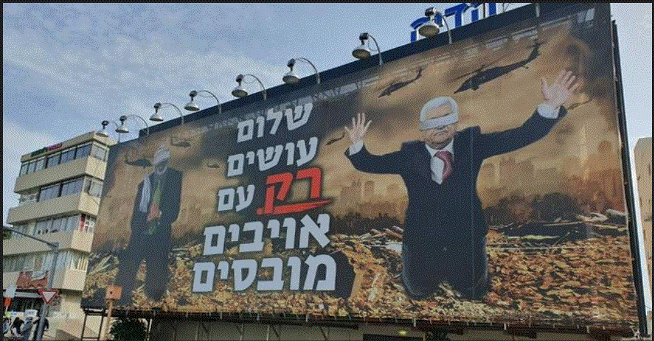 In explaining this decision, Huldai revealed the mindset shared by many leftists today. “The sign which incites for violence reminds one of ISIS and the Nazis – which we do not want to be associated with … the humiliation of the ‘other’ is not our way,” said Tel Aviv’s mayor.

This is a breathtaking statement that well represents Israel’s political divide, which Channel 13 reporter Avishai Ben Haim says is all about identity. In the coming election, Ben Haim said, “the entire national-traditional camp faces suspension. This is what the election is all about.” Ben Haim’s opinion is shared by many who believe that two rival camps are running in the election: The secular democrats made up mostly of Ashkenazi Jews, and the tradition-oriented Sephardic Jews, who since the 1940s have been viewed by the former as inferior second-class citizens. The coming election, accordingly, could prove detrimental to Israel’s Jewish identity.

This concern seems to be substantiated by Huldai’s explanation, which expresses a radical view that, among other things, no longer places any value in collective identity. Huldai’s vision is one of a world where individuals all treat one another as equals. In such a world, “enemy” becomes a xenophobic category that strips the “other” from his basic human rights.

Huldai’s actions, which include flooding the city with identity-less illegal immigrants and restrictions on public religious Jewish events, show clearly that he views Judaism as inferior to the postmodern value system, which in turn sees Israel as a racist entity. It is for this reason that leftists like Huldai maintain that the Jewish state must give way to democratic state in which Israel’s self-declared enemies are legitimized in the name of some imagined “other.”

Viewing Jews as inferior is not new. Neither is the fact that antisemitism has always walked hand-in-hand with efforts to “emancipate” the Jews from their collective identity.

What is now called “new antisemitism” is not new either. It is the same effort, only now lead by the political left, to end the existence diasporic Jewish communities decimated by the political right of the 1940s. Today’s New Antisemitism aims to silence the last expression of sovereign collective Jewish identity, which makes Huldai’s comparison of Israel’s political right, that fights to keep Israel Jewish, to the Nazis all the more bizarre. In such a political climate, “I am proud to be a Jew” makes perfect sense.