Israel has been open about the fact that it is planning a military strike against Iran’s nuclear program, should negotiations in Vienna between the Islamic Republic and Western powers fail. Jerusalem has even approved a 5 billion shekel budget for the operation.

But the threat of military action will turn out to be hot air if Israel lacks the equipment to pull it off. And news came this week that a key component won’t be in Israel’s hands before late 2024. Iran, should it so choose, will already have a nuke by that time, according to the estimates of numerous experts.

The New York Times reported that Washington recently informed Israel that it wouldn’t be receiving its order of Boeing KC-46 refueling planes for another three years, at the earliest.

Without those tankers, Israel can’t launch and sustain a large-scale aerial assault on Iran’s widely-dispersed and heavily-fortified nuclear facilities. Israeli warplanes and bombers will need to refuel mid-flight.

While Israel now has friends on the Persian Gulf, they’d almost certainly be unwilling to participate in direct military action against their belligerent Shiite neighbor. Which means launching the assault from an airfield nearer to Iran is also out of the question.

Iran responded to the Israeli threat on Wednesday by publishing a map that it says shows all the numerous targets that it can hit in the Jewish state at any time.

The map appeared on the front page of the Tehran Times, an English-language mouthpiece of the regime.

“Just One Wrong Move!” read the headline of the article, which opened with the paragraph:

“An intensification of the Israeli military threats against Iran seems to suggest that the Zionist regime has forgotten that Iran is more than capable of hitting them from anywhere.” 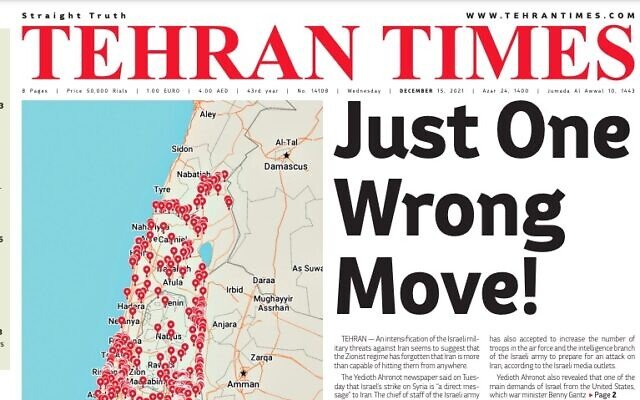 Interestingly enough, the target map published by the Tehran Times appears to acknowledge that all the land west of the Jordan River, as well as the Golan Heights, is Israel, something that’s not likely to sit well with the Palestinians.

But perhaps the Iranians don’t actually care about the Palestinians, given that every major Palestinian Authority-controlled city is also marked as a potential target.