Even after eight decades, dramatic new stories of Holocaust survivors keep emerging. And Twice Rescued Child (published by SPCK in 2019) is another inspiring testament to triumph over adversity along with the truth of Romans 8:28 – “that in all things God works for the good of those who love him, who have been called according to his purpose.”

Thomas Graumann, who turns 90 this year and who has written his story with the help of Tricia Goyer, was finally persuaded by his family to record his memoirs, and I pray it will bring untold blessing to many.

Thomas was born to a Jewish family in Czechoslovakia and was a beneficiary of the Kindertransport programme when, at just eight years old, he was put on a train at Prague station as one of the 669 children rescued from the Nazis through the extraordinary efforts of Sir Nicholas Winton, a British businessman who realised they were in great danger. 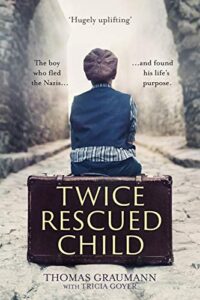 The young boy merely saw it as a great adventure, not realising that he would never see his parents again – they died in the concentration camps, along with his younger brother Tony, who was too ill to travel with him.

But for Thomas it certainly was the beginning of an amazing adventure that would eventually take him around the world. Unlike most of the children accompanying him, who got off in London, Thomas travelled on to the north of Scotland, where he was taken in by kind Christians.

Within a year he had made his own personal commitment to Christ and, while still a boy, felt called to be a missionary and duly trained as a nurse. In time, he was taken on by the Overseas Missionary Fellowship whom he served in the Philippines for some years, reaching tribes living in remote areas of the rainforest.

When he learnt that single men were preferred in view of the harsh conditions, Thomas resigned himself to such a life – until he realised he needed a wife; not only to help him with daily tasks, but to fit in with a culture where men were not expected to perform women’s chores such as cooking and fetching water.

He finally fell for a fellow missionary from America and, when no children had arrived after several years, tests showed they were both infertile. But, as with Abraham and Sarah, Caroline believed God had promised them children. They duly adopted two of them, after which another two came naturally!

The conditions on the mission field did not always suit their health, and they lived in America for some years while the children were growing up. Thomas eventually returned to his native Czechoslovakia (now the Czech Republic and Slovakia) where he taught English for many years while also working with local churches reaching out to their communities.

It was only at this stage he made the astonishing discovery that his mother, in her will, had stated that, if she did not return from the concentration camp, “she desired that Tony and I should be brought up in an evangelical family.” She actually wanted Thomas to be trained as a preacher, and Tony as an engineer, having befriended an evangelical pastor, with whom she had many talks, and whose church she had apparently joined with her two sons. “Maybe she too had come to faith in Christ,” Thomas wondered.

Though you can get a little lost in the detail at times, this is a wonderful record of a life that was doubly blessed – by being snatched from the deadly grasp of the Nazis and delivered into the loving arms of the Lord Jesus Christ.

It’s the Gospel of Thomas (not the original one, of course) and it’s an inspiring read!