A few weeks ago the daily anti-Zionist publication Haaretz interviewed Yuli Novak, former head of the anti-Israel Israeli NGO “Breaking the Silence” (BS – a fitting acronym), which has since been published in the English edition of Haaretz. Novak would like us to believe that, though she suffered no harm, she was forced to flee Israel due to persecution by the Israeli authorities and violent right-wingers.

Two things in particular broke Novak’s spirit. The first was a demonstration by BS in solidarity with Gaza during “Operation Protective Edge” in 2014. Ironically, while demonstrating, Hamas launched missiles at Tel Aviv, forcing the police officers who were separating the BS and anti-BS demonstrators to take cover. This left the arena open for verbal trash-talk between the rivals. The verbal abuse directed at Novak shook her to the core.

The second event was an investigation by right-wing NGO Ad Kan, which exposed what was in essence the collection of information from unwitting IDF soldiers to be used against Israel. Israelis, including then-Defense Minister Moshe Ya’alon, viewed this activity as outright treason. Novak found herself investigated by the police on suspicion of treason. Despite Ad Kan’s findings, however, the investigation ended with nothing. But the fact it took place at all was enough for Novak to claim persecution.

But what really broke the camel’s back was Novak’s realization that there is really no difference between a settlement in the West Bank and Tel Aviv. In her view, then, the entire State of Israel is “occupied territory.” Those familiar with post-colonial and critical race theories know it means that democratic as it may be, Israel as a Jewish nation-state embodies the most dreadful form of oppression. In the eyes of post-colonial thinkers like Achille Mbembe, Israel represents the ultimate death machine that, to use the term of Georgio Agamben, turns the Palestinians into homo sacer or “accused man.” According to Roman law, the homo sacer can be killed by anyone.

Novak expresses this idea of death-state implicitly: “What I know is that you can be either Zionist or anti-Zionist. I don’t accept it. I want to deconstruct the concept of Zionism. There is Zionism as a political ruling structure, that holds fast to the idea of militarism as an essential survival tool. It gives priority to one group over others … in this structure I no longer trust.” 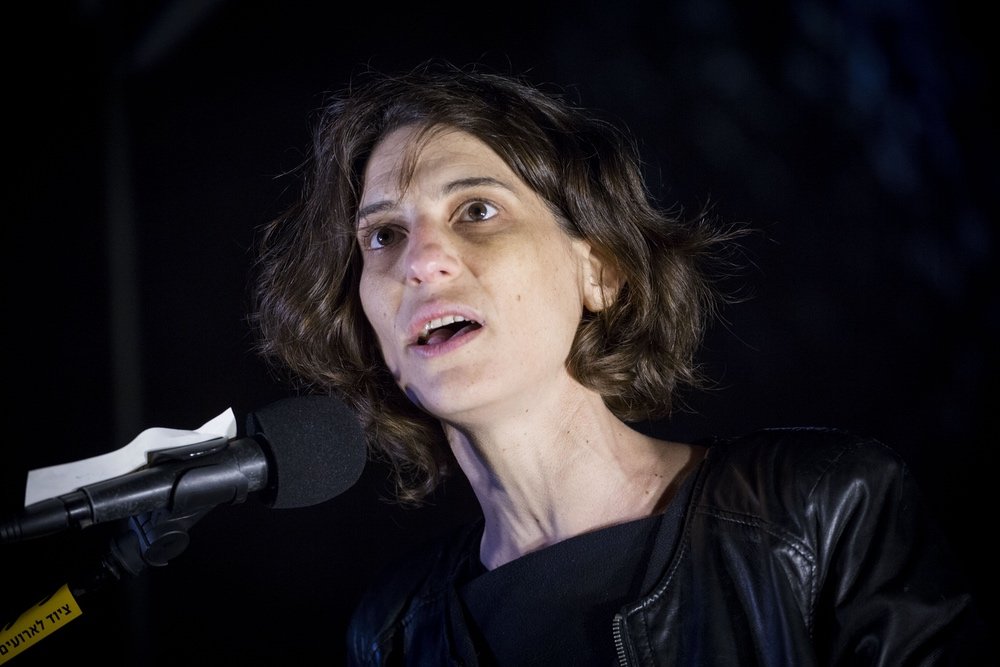 Yuli Novak ranting against the “occupation” of Jerusalem at a left-wing rally ahead of Jerusalem Day celebrations in 2017. Photo: Yonatan Sindel/Flash90

I spent some time on Novak because she stands today where what’s left of the Zionist Left will be tomorrow. Her conclusions are being accepted by an increasing numbers of Israeli Jews.

And Novak is not standing alone. Dovetailing the Haaretz interview was the latest column of journalist Kalman Libeskind in the daily Maariv, in which he presented a whole list of anti-Zionists who have fled Israel. Among them are Adi Ophir, who taught history and philosophy at Tel Aviv University. He founded the NGOs “Year 21 (of occupation)” and “We Are Refugees.” Already back in 1987, Ophir compared Israel to Nazi Germany in an article that called on Israelis to rebel and refuse to do their military service in the “occupied territories.” Since then, as noted, the notion of “occupied territories” for this group of people has expanded from the West Bank to encompass the whole of Israel.

Another one who fled Israel is Hanan Hever, former professor of literature at the Hebrew University. Hever, together with Ophir, founded the NGO Yesh Gvul. Follow that link to find out with whom this organization is associated. The rest of those mentioned by Libeskind share the same views. Among them are Eitan Bronstein, founder of Zochrot; Neve Gordon, former professor at Beersheva University and former CEO of Physicians for Human Rights; and former Israel Air Force fighter pilot Yonatan Shapira, founder of Combatants for Peace. And the list goes on.

Some of these leading anti-Zionist activists are fleeing Israel never to return. Others, like Novak, are planning to return, fully rejuvenated and ready to escalate their war against the State of Israel. “Fleeing” Israel is the term Haaretz chose to describe this phenomenon. This in order to create the impression of a persecuted minority. It further creates the impression that their lives are in danger. But, as usual with post-modern narratives, these impressions are imagined. Not factual. If anything, these activists are supported and protected by Israel’s legal system and its academic establishment.

Take for example the case of Neve Gordon, mentioned above. Despite his strong support for the anti-Israel Boycott, Divestment and Sanctions (BDS) movement, he continued to be paid by the very state he called for sanctions against to teach at one of its leading universities.

To use the terminology of “fleeing Israel” thus draws a tacit parallel between those brilliant intellectuals who fled Nazi Germany and those anti-Zionists who fantasize that they are running away from a Nazi-like Israel. Their escape, they would like us to believe, is not a sign of cowardice, but of courage. But the truth is that their virulent anti-Israel ideology, though portrayed as a high moral position, is essentially antisemitic, at least according to the updated definition of antisemitism as articulated by the International Holocaust Remembrance Alliance (IHRA).

And indeed, it should be obvious by now that the post-modern version of antisemitism is viewed as moral because a Jewish state is seen as the epitome of what Achille Mbembe has termed “necropoitics,” which means a racist state that is reducing the Palestinians to homo sacer, or zombies if you like. The fact that Jews, Israelis or not, are promoting such deadly ideologies makes no difference. It is in this context of rising Jewish antisemitism that Natan Sharansky and Gil Troy wrote the article titled “The Un-Jews” in which they say that the Novak-like crowd see Zionism as “a diverse set of linked ethno-nationalist ideologies … shaped by settler colonial paradigms … that assumed a hierarchy of civilizations” thus contributing “to unjust, enduring, and unsustainable systems of Jewish supremacy.”

This kind of view, say Sharansky and Troy, “effectively denie[s] the need for a Jewish state, thereby declaring war not just on Israel’s existence but on modern Judaism as we know it.” In this light there is no wonder that most Israelis are chanting silently “run baby run.”