Coronavirus restrictions have pushed 50,000 Israeli households below the poverty line

A majority of capitalist-minded small business owners are traditionally aligned with the ruling Likud party. But the government’s failure to adequately support and compensate them amidst repeated coronavirus closures has many now joining the weekly anti-Netanyahu demonstrations.

While the government has allowed some shopping centers, malls and stores to reopen (with limitations), restaurants have been particularly hard-hit as they are still prohibited from offering sit-in dining. Some have managed to make ends meet with increased delivery options, but that hasn’t worked for all.

This week, restaurant owners and their employees gathered outside the Knesset to protest the ongoing lockdown and lack of compensation after months of being out of work.

With daily new coronavirus infections again numbering over 2,500, they might soon be joined by other small business owners as the government mulls a new 5-week closure. 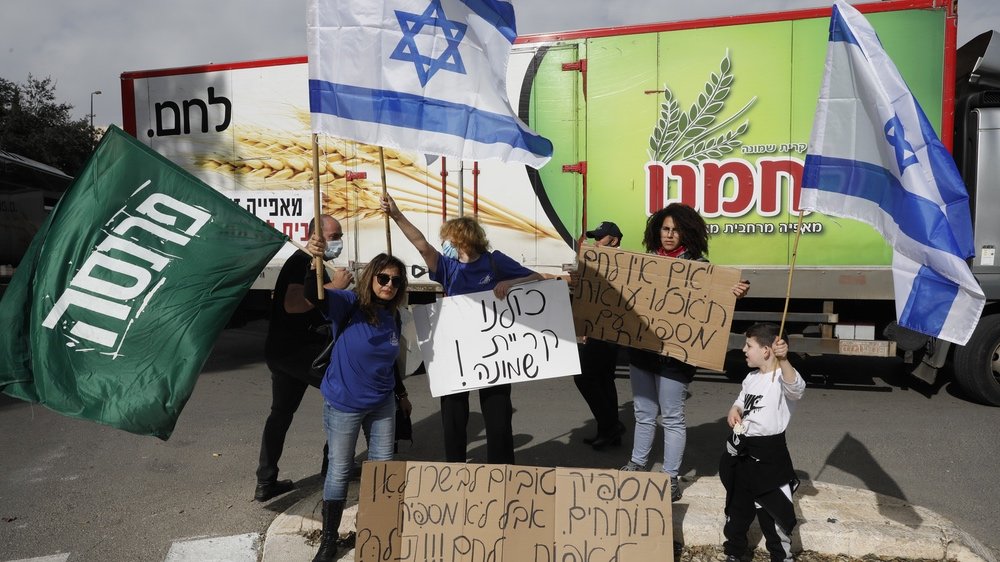 Workers from a bread factory in northern Israel protest their inability to produce and sell as usual.

Israel is a socialist nation, and has been able to provide for its population better than some others during the current crisis.

But at an economic forum on Tuesday, Minister of Labor Itzik Shmuli warned that Israel’s welfare services could soon be overwhelmed if the situation persists much longer.

“The economic crisis wrought by the coronavirus is unprecedented in its scope and strength,” Shmuli told the Eli Hurvitz Conference on Economics and Society. Two and a half million Israelis have been economically hurt by the crisis, almost 50,000 households are plunged below the poverty line and some 100,000 are now closer to poverty.”

Keep in mind that the population of Israel is under 9 million.

Shmuli noted that currently there is just one job opening for every 16 unemployed Israelis, and that it will take many years for the nation to recover from the consequences of how the coronavirus crisis was handled.