Ayman was one of those rare few who had made it internationally, a talent who had managed to break the invisible bonds of a society that often makes it impossible for young people to realize their dreams and live as they want to live. It is young people like him who break the ice, paving the way for others to follow.

When Ayman’s body was found last Wednesday on the beach near Atlit, a world collapsed, and not only for his family.

For days prior, dozens of volunteers and friends had combed the coast of Israel for Ayman. He had gone to the beach with friends to stay overnight. Because of the rough wind, the friends had agreed not to go into the water. In the morning, the weather had improved so they decided to take a quick dip. But then one of the friends was almost swept away by the current, they said. Ayman pushed her towards the shore and was never seen again.

The mayor of Kfar Yassif, the town where Ayman grew up, stepped in. He and Arab members of the Knesset appealed to the authorities to extend and intensify the search. There were no fireworks as local Muslims marked Eid al-Fitr, the festival of breaking the fast at the end of Ramadan. No one felt like celebrating.

Ayman Safiah, born in 1991, was fortunate to grow up in a relatively liberal family that supported his desire to become a ballet dancer. This was far from ordinary. He was the first and only boy in the village ballet school, incidentally the first Arab dance studio of its kind in all of Israel.

In a 2012 interview with the BBC, Ayman spoke about the opposition he faced, especially from the direction of religious people: “They say ballet dancing is against Islam. A man should not wear tights and dance topless on a stage, that is haram, forbidden.” But the insults all seemed to roll right off him. And not only him. When he visited his old ballet school in Kfar Yassif years later, Ayman found practicing there several young dancers, who thanked him for his courage and for leaving footsteps that they could now follow.

In 2009, Yehudit Arnon, the founder of the Kibbutz Contemporary Dance Company where Ayman danced, described him in an interview with Ha’aretz as the “Billy Elliot of Kfar Yassif.” Arnon established the dance center because she wanted to bring Arabs and Jews closer together.

Ayman was such a talented dancer that he was invited to study at the renowned Rambert Dance Academy in London, scholarship included. After completing his studies with distinction, he went on to perform in Cats on the West End in London and with the Belgian troupe les ballet C de la B. His success took him around the world. 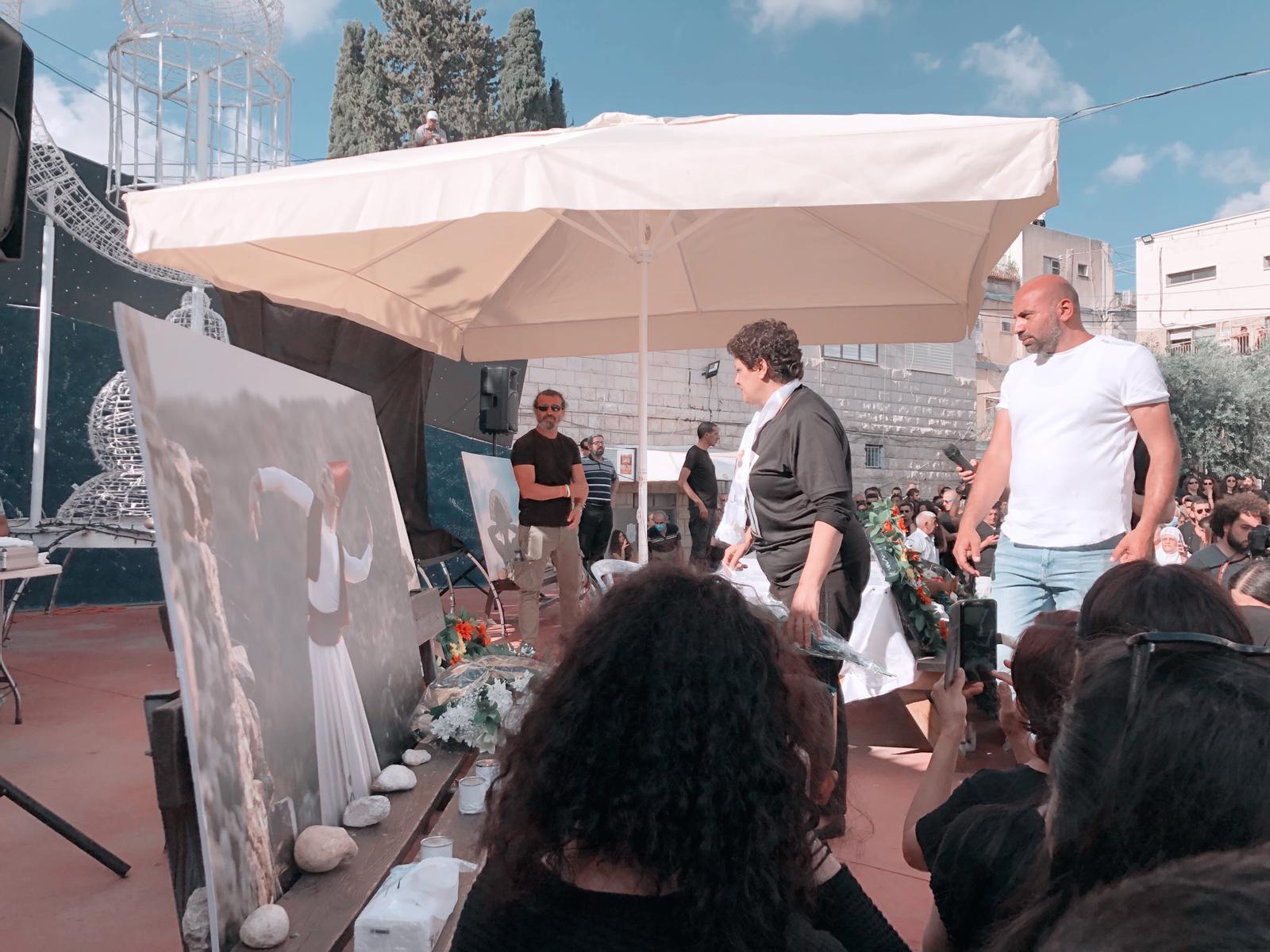 Ayman’s mother in front of a picture of the dancer put up by friends in the village.

I am sitting with Ayman’s sister, Ishtiyaq (24), in her room. The air is heavy. It is a small, darkened room in a house in the middle of the village. Outside the women of the family are sitting in a circle on plastic chairs in the courtyard ready to receive mourners. (Traditionally, women and men sit separately.)

Ishtiyaq’s eyes light up when she talks about her big brother. When I ask her why he came back to Israel a year-and-a-half ago, despite worldwide success, she tells me: “He wanted to give something back, he wanted not only to dance and perform worldwide, but also to change something in our society. And he did.”

She tells me about the Alaml contemporary dance organization in Nazareth, where Ayman taught young people to dance and encouraged talent. She tells me how the day before at his funeral, thousands of people from all over Israel came to accompany her brother to his final resting place. Among the mourners were politicians like former Member of Knesset Muhammad Barakeh. Even the new Israeli Minister of Culture, Hili Tropper, a religious Jew by the way, spoke out: “Ayman’s death is a great loss to the dance world.” Safiah had received worldwide attention, Tropper noted in the press.

Many doubt whether Ayman could have enjoyed such a remarkable dance career had he been born in one of the Arab countries of the Middle East, especially given that he was openly homosexual.

While the women are mourning in the courtyard of the house, 300 meters away the Greek Orthodox Church has opened its doors to the men of this Muslim family. It’s a touching gesture. “Through Ayman’s loss we can learn how to grow together and what we can give to each other. We must help each other. I believe nothing happens without a reason. His death could wake up society and I can already see them waking up and changing. You must write this, please write this,” his sister pleads with me.