(JNS) The “broken windows” theory of policing, which was responsible for a stunning drop in crime in New York in the 1990s, was based on a simple proposition. This was that bad people are encouraged to commit serious crimes if lesser social nuisances such as litter, vandalism or fare evasion are ignored.

This transmits the fatal signal that those in authority are giving a free pass to disorder. To stop serious offenses, there must be a consistent message that there will be zero tolerance for breaking any of the rules that keep a society civilized.

The “broken windows” theory might well also be applied to politics. The classicist and commentator Victor Davis Hansen has published a bone-chilling analysis of America that suggests it is inexorably going down to destruction.

All this is true. But as he also notes, “all these catastrophes are self-induced. They are choices, not fate.”

This indeed is key. A culture self-destructs if its people choose not to defend it. Bad people get away with really bad stuff when everyone else chooses to look the other way.

The same dismal and demoralized cultural trajectory is taking place in Britain, although not as explosively as in America.

Successive British governments have chosen not to take the action necessary to control the country’s borders or prevent the Balkanization of British society through Islamist intimidation. They have chosen not to show zero tolerance of the various lunacies and bullying of identity politics, thus giving a green light to ever-more socially and culturally destructive behavior.

In foreign policy, we are witnessing the terrifying results of the failure to apply zero tolerance to breaches of the rules of civilization. The West’s eagerness to profit from Russia’s mafia state and its even more suicidal appeasement of Iran have resulted in Russia’s terrible onslaught on Ukraine, and the genocidal Iranian regime arriving at the point of nuclear-weapons breakout.

The failure to learn the lesson of the “broken windows” theory is particularly apparent over the tsunami of antisemitism engulfing Israel and the Jewish Diaspora.

This has come about because the West has chosen not to display zero tolerance of Palestinian lies intended to demonize Israel, write the Jewish people out of their own history and steal their country.

Instead, these lies have been uncritically recycled by the Western media, which have thereby been doing the Palestinians’ dirty work for them in transforming Palestinian Arab aggressors into victims and their Israeli victims into bloodthirsty oppressors.

This was graphically underlined over the recent killing of Al Jazeera journalist Shireen Abu Akleh in a firefight between Palestinian gunmen and Israeli soldiers in the West Bank city of Jenin.

It remains unknown whether Abu Akleh was killed by a Palestinian or Israeli bullet. And the Israeli police say they only moved to control her funeral procession when it was in danger of being hijacked by a crowd bent upon hysterical incitement. Despite this, the Western media denounced Israel for killing Abu Akleh and wantonly brutalizing her mourners.

Worse, US Secretary of State Antony Blinken also adopted this malicious and unfair narrative. Over both the Palestinians and Iran, the Biden administration appears anxious to display “zero tolerance” of Israel’s interests rather than those intent on wiping it off the map.

Meanwhile, there’s a huge and continuing spike in antisemitic attacks in America and Britain. These things are all connected.

Following the Akleh furor, Israel’s Consul General in New York Asaf Zamir pointed out on CNN that antisemitic incidents in New York City had quadrupled in the last year, saying:

“You automatically blame Israel for things we haven’t done. That turns into anti-Semitic attacks at the end of the day and anti-Semitic sentiments in the United States.”

Antisemitism can never be eradicated. Much more, though, could be done to push it underground by making it wholly unacceptable. This is where the Jewish world itself has been falling down badly. It has failed to show “zero tolerance” for those responsible for promoting it.

Many in the Jewish world have worried for years about the rise in antisemitism and have spent millions of dollars trying to combat it. Yet in general, this has proved ineffectual because Israel’s defenders have always sought to play defense rather than adopt the only strategy that works—to go onto the offense.

Under the “broken windows” theory, police officers didn’t wait around for the murder rate to spike but took measures to show they wouldn’t tolerate lesser infractions. But defenders of Israel only react when antisemitic attacks have erupted, having ignored the poisonous subculture in which they have been incubated.

While Israel’s defenders have confined themselves to playing catch-up, their foes have been pro-actively and aggressively reshaping the cultural and political landscape.

Palestinianism has worked because of a strategy, applied over decades and backed by huge funds, to seed an entirely false narrative among gullible Western liberals that has reversed aggressor and victim and demonized Israel and its defenders.

Those defenders need to adopt a similar pro-active and aggressive strategy against Israel’s foes but on the basis of truth rather than lies.

That means creating an infrastructure that seeks to frame public debate rather than just react to it. The principal aim should not be to tell people about Israel and the Jewish people (important though that remains). Its main purpose should be to alert the public to the key fact of which they are almost wholly unaware—that they are being lied to, and that the cause they may be supporting in good faith is an evil and genocidal one.

It is astounding, for example, that Israel’s defenders aren’t regularly publicizing the eye-watering and deranged antisemitic cartoons, sermons, and statements that are perpetually pumped out by Palestinian media and carefully translated and displayed on the websites of the Middle East Media Research Institute (MEMRI) and Palestinian Media Watch. 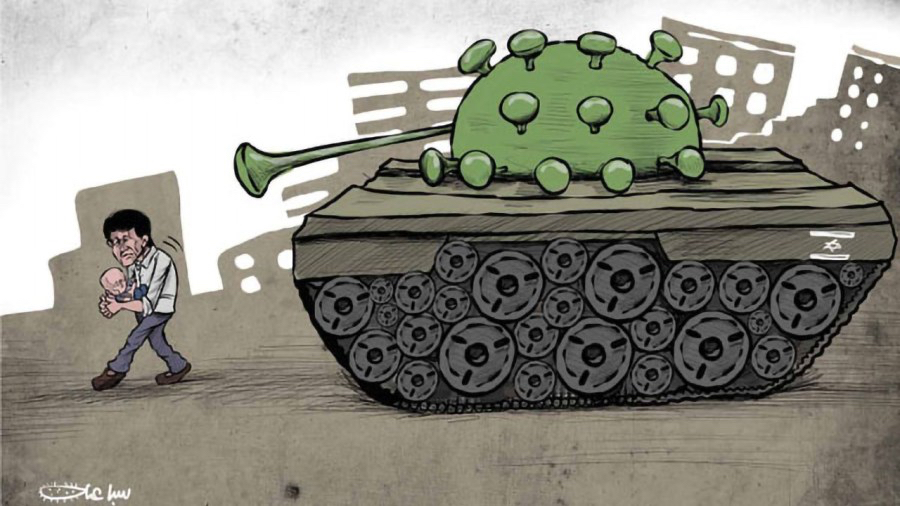 Libelous political cartoons like this blaming Israel for the coronavirus are commonplace in Arab media. But despite being dutifully translated and recorded by Palestinian Media Watch and others, such rhetoric is all but ignored by the international press.

Such material provides a weapon with which to target the Israel-haters’ Achilles heel—their narcissistic self-regard. For what’s of prime importance to such individuals is their self-belief as people of conscience committed to anti-racism, anti-colonialism, anti-imperialism and so on.

An effective pro-Israel strategy would name and shame all such offenders—media outlets, specific journalists, academics and other cultural leaders—by rubbing their noses in what is being said by the Palestinians they champion, in order to expose such “progressives” as facilitators of racism, ethnic cleansing and Arab imperialism.

Most people in the West have no idea that the Palestinians they support are spewing out Nazi-style incitement against Israel and the Jewish people. That’s because no one—in the Jewish world or anywhere else—is making use of such material to ask how any civilized person could ever support such people. Instead, an increasing number of liberal Jews are themselves also supporting them.

Media monitors like the Committee for Accuracy in Middle East Reporting and Analysis (CAMERA) and Honest Reporting do excellent work in exposing the lies, but who outside the Jewish community hears about their work? A joined-up strategy would ensure that political and other figures whose utterances are news-worthy give these findings a megaphone. It might even give them a TV station.

All this would require an enormous investment of money, people and time. Most importantly, though, it would need the pro-Israel world to adopt a totally different mindset—creating a strategy to break the enemy’s windows before they break any more of your own.

Melanie Phillips, a British journalist, broadcaster and author, writes a weekly column for JNS. Currently a columnist for “The Times of London,” her personal and political memoir, “Guardian Angel,” has been published by Bombardier, which also published her first novel, “The Legacy.” Go to melaniephillips.substack.com to access her work.