Lavish Politics During the Days of Jesus

A luxurious 2,000-year-old public building or “city hall” was unearthed near the Western Wall in Jerusalem. “This is, without doubt, one of the most magnificent public buildings from the Second Temple period that has ever been uncovered outside the Temple Mount walls in Jerusalem,” said excavation director Dr. Shlomit Weksler-Bdolach. According to her, the building was likely used by city officials who wanted to impress their guests and garner political favors.

British archaeologist Charles Warren first identified the building in the 19th century, but excavations were delayed over the next 150 years. Archaeologists previously believed that the public center was built by the Hasmonean dynasty (roughly 143 to 37 BC), but based on new discoveries this year of coins and pottery, experts now say that it dates to between 20 and 30 AD.

Before the building was destroyed by the Romans together with the Temple in 70 AD, the structure’s two large rooms were paved with enormous stone slabs, and between the rooms stood a huge decorative fountain with lead pipes to shoot water through Corinthian capitals installed in the walls.

The site is now open to visitors who can get an idea of the opulence of Jerusalem’s ancient “City Hall.”

An ancient “two-gerah” stone dug up in the City of David, in Jerusalem, found to weigh over three times the amount inscribed on its surface and archaeologists say it was used to cheat in trading.

A gerah is one of the smallest weights that was used in the Kingdom of Judah during the First Temple Period. According to the Book of Exodus, a shekel is “twenty gerahs — half a shekel for an offering to the Lord” (30:13).

The 2,700-year-old artifact was found in the drainage channel along the foundations of the Western Wall. Just 14 millimeters (.55 inches) in diameter and 12 millimeters (.47 inches) high, it is made of a “hard, smooth, well-polished reddish limestone,” archeologists investigating the site said in a statement. “It is a very rare find and is the second weight of this kind found in archaeological excavations throughout Israel.” 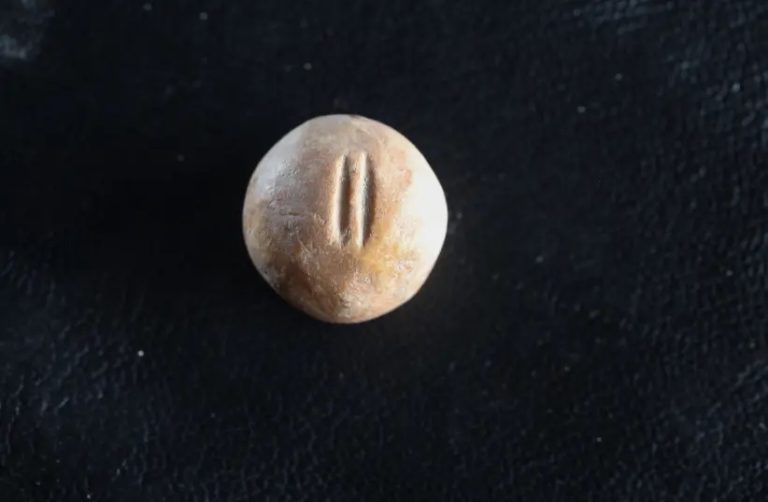 The stone is marked with two parallel lines engraved in its surface indicating the weight of two gerah, a biblical weight of about 0.944 grams (0.033 ounces). But when researchers put it on a scale, they discovered its real weight was 3.61 grams (0.127 ounces), over three times as much.

Archaeologist Eli Shukron, who conducted the excavation, and Hagai Cohen-Klonimus from the Hebrew University who helped examine the stone, concluded it was used for fraudulent trading.

“The Bible indicates that the problem of weight deception is nothing new,” they said. “Merchants cheated and held separate heavy and lightweight systems and used them when buying or selling.”

The practice of cheating with weights is condemned in several places in the Bible, including in the Book of Deuteronomy, which warns that “the Lord your God detests anyone who does these things, anyone who deals dishonestly.”

Even back then folks didn’t read their Bibles! 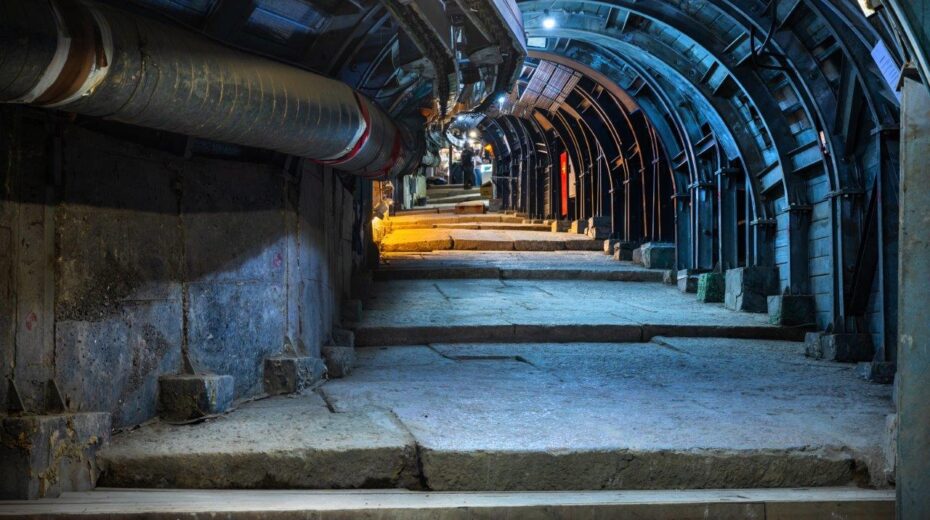 The Last Battle for Jerusalem

Evidence from the battle of Jerusalem some 2,000 years ago, on the eve of the destruction of the Second Temple, was discovered at the City of David, where arrowheads and stone catapult balls were found on the main street that led from the Pool of Siloam through the city gates up to the Temple. According to Dr. Yuval Baruch, the Jerusalem region archaeologist for the Israel Antiquities Authority, “We intend to uncover the entire length and width of the street within five years… When the excavations are completed, the remains of the street will be conserved and developed and made ready to receive the tens of thousands of visitors who will walk along it.”

The finds along the Pilgrims Way tell the story of the last battle between the Roman forces and the Jewish rebels who had barricaded themselves in the city, a battle that resulted in the destruction of Jerusalem. This battle is described by the historian Flavius Josephus: “On the following day the Romans, having routed the brigands from the town, set the whole on fire as far as Siloam.”

For a virtual tour of the ancient road leading up to the “Mountain of the Lord,” visit Israel Today’s The Pilgrims Way: A Live Tour “Up To” Jerusalem’s Temple. 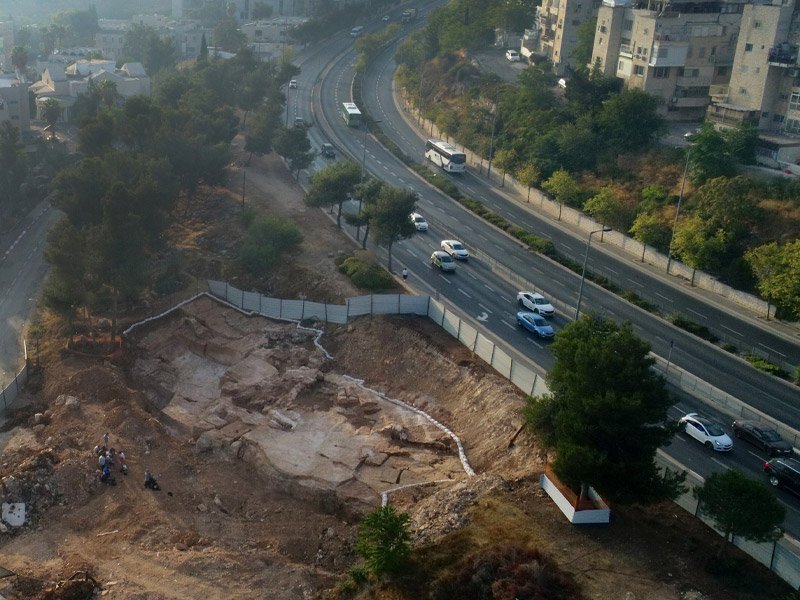 Jerusalem’s well-known hi-tech industrial zone is called “Har Hotzvim” (‘Quarrymen’s Hill’), but until now hardly anyone knew why. During the groundwork for the future development of the hi-tech industrial area, the Israel Antiquities Authority (IAA) uncovered evidence of the name’s meaning when they discovered an enormous ancient quarry that dates back to the First Century and the Second Temple period.

“The large-scale building projects in ancient Jerusalem, such as the Temple Mount, required a vast amount of building materials and the ability to organize and coordinate the quarrying and transportation of thousands of building blocks to the ancient city,” says Moran Hagbi, the excavation’s director on behalf of the IAA. “Building blocks in various stages of working were discovered in the quarry. For example, we uncovered large, square blocks of stone about to be detached from the bedrock, prior to loading and transporting them to the ancient city. For us as archaeologists, this quarry presents a golden opportunity; because some of the stones were left in situ in this way, we can copy ancient technologies and experiment with them to recreate the processes by which the building stones were quarried.”

IAA archaeologists and conservationists are now planning to try and recreate the ancient methods used to detach the huge stone blocks used to build the Temple, some of which can still be seen at the base of Jerusalem’s the Western Wall. We may finally get a better understanding of how these massive stones were quarried and transported, the largest of which found so far is 44 feet long and weighs 570 tons!

According to IAA’s general director, Eli Eskozido, “In a symbolic way, Jerusalem’s current development boom presents us with an opportunity to excavate and research the great building projects in Jerusalem in antiquity. Before any development project begins in Jerusalem, our archaeologists are called upon to excavate and examine any ancient finds, for the sake of future generations.”

The old adage that in order to move forward we should first take a look at where we came from is certainly true in Israel, and for anyone seeking to understand the mysteries of a meaningful life on this planet. 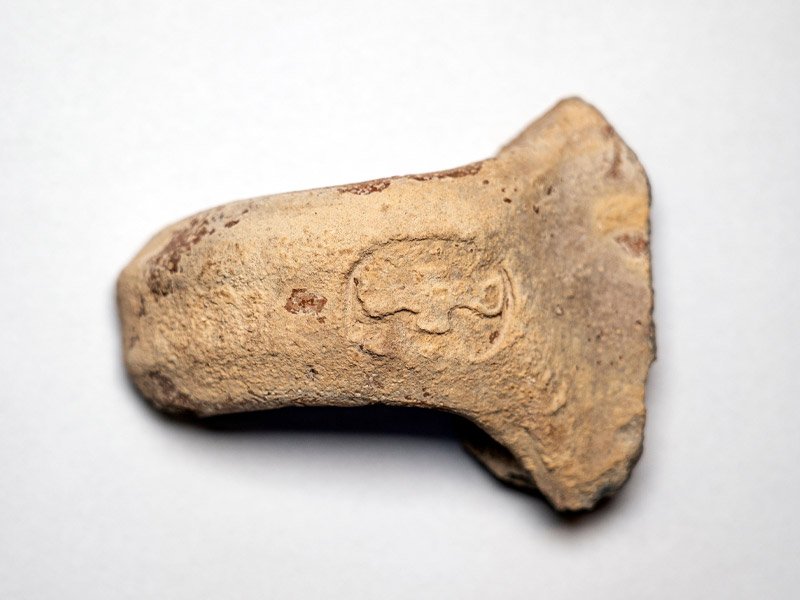 ‘To the King’ – two-winged seal impression.

An unusually large administrative center from the days of Kings Hezekiah and Manasseh (8th century to the middle of the 7th century BC) was uncovered in excavations in the Arnona neighborhood of south Jerusalem.

The facility from the First Temple period dating back nearly 3,000 years revealed over 120 seal impressions stamped on jars providing a glimpse into tax collection and other civic administration practices in the period of the Judean kings.

Among the finding was a Hebrew two-winged seal with the inscription, “To the King.” Many of the jar handles bare the inscription “LMLK” – (belonging) to the King – with the name of an ancient city, while others feature the names of senior officials or wealthy individuals from the First Temple Period. This is one of the largest and most important collections of seal impressions ever uncovered in archaeological excavations in Israel. 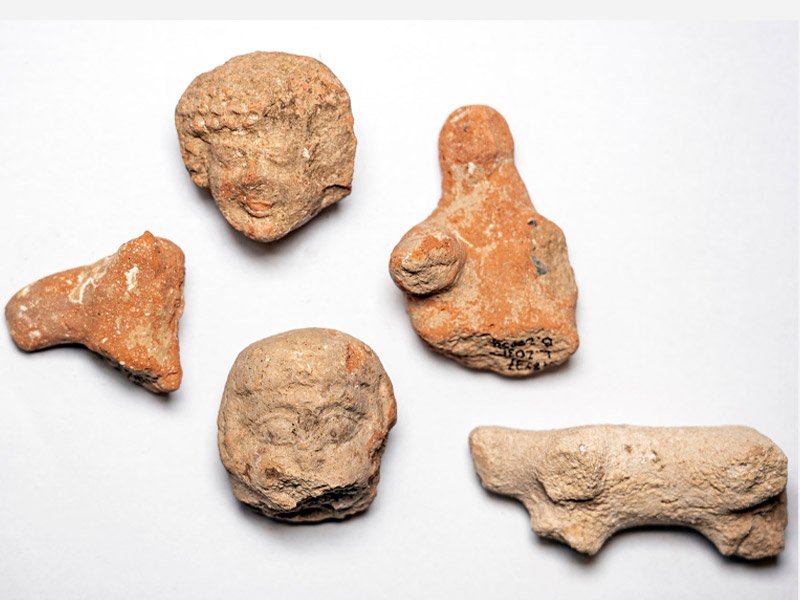 Clay figurines of women and animals found at the site.

According to Neria Sapir and Nathan Ben-Ari, directors of the excavations on behalf of the Israel Antiquities Authority, “This is one of the most significant discoveries from the period of the Kings in Jerusalem made in recent years. At the site we excavated, there are signs that governmental activity managed and distributed food supplies not only for shortage but administered agricultural surplus amassing commodities and wealth. Evidence shows that at this site, taxes were collected in an orderly manner for agricultural produce such as wine and olive oil.

“The site once dominated large agricultural plots and orchards of olive trees and grape vines which included agricultural industrial facilities such as winepresses for winemaking. The site is dated to a period documented in the Bible by upheavals such as that of the Assyrian conquest campaign – under the command of King Sennacherib in the days of King Hezekiah.”

What a challenge it must have been for the Kings of Judah to collect municipal taxes 2,700 year ago for those epic biblical battles. Are we to complain of the high taxes for defense in Israel today?