In its early days, the fledgling city of Tel Aviv under the Ottomans designated streets by number, but that wasn’t much help as the city grew. So, for example, the first street in this series, Gruzenberg, was initially labeled as Street No. 13. Allenby Street, which we are looking at today, was Street No. 4. By the mid-1920s there were about 170 streets, and the number system agitated both the residents of the city and the British Mandate officials, who couldn’t make heads or tails of these numbers. 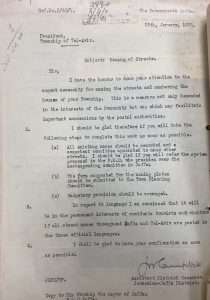 So, on January 1925, the Governorate of Jaffa instructed the city council to form a street-naming committee. It also instructed the council that street signs would be written in Hebrew, English and Arabic. Arabic was dropped, but later reinstituted in a 2002 decision by the Supreme Court (the significance of this  is great, but can’t be discussed here).

Choosing to name one of Tel Aviv’s main streets after Field Marshal Edmund Henry Hynman Allenby was an obvious choice. Allenby was the commander of the British army that defeated the Ottomans in a military campaign that lasted almost a year – from November 1917 to September 2018. Though people tend to think that defeating the Ottomans was a walk in the park, the British fought hard to conquer the Holy Land, which back then included parts of Lebanon and Syria. After three failed attempts at conquering Gaza, he was able to defeat the Ottomans first at the city of Beersheva, and then, on December 11, he conquered Jerusalem. Before entering, he dismounted his horse in front of Jaffa Gate, and walked in on foot as a sign of respect to the holy city. 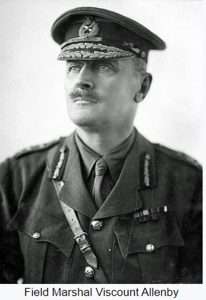 The Holy Land during WWI was struck by severe famine. People literally starved to death. Jerusalem in particular suffered, so much so that Jewish women were forced into prostitution to feed themselves and their families. And as far as Tel Aviv is concerned, on April 6, 1917, Djemal Pasha, the Ottoman governor of Greater Syria, ordered the evacuation of Jaffa and Tel Aviv. The order, however, was forced only on Jews, and the 7,000 or so residents of the city of Tel Aviv became exiles in their own land. Those who survived the famine and disease were allowed to return following the Battle of Megiddo.

The military campaign over the Holy Land was over following the September 21 Battle of Megiddo (Armageddon), that essentially marked the end of WWI. Only nine days after this battle an armistice was declared, and on October 30 the Ottoman Empire surrendered officially, thus ending 400 years of Ottoman rule. Allenby’s victory at Megiddo earned him the title Viscount Allenby of Megiddo.

Allenby and the British soldiers were received by the Jews with great joy. He was called “Allenby the Maccabi,” and 400 Jewish children of Jerusalem threw flowers at him as he walked into the city. The overjoyed renowned author and educator Haim Arieh Zuta wrote, “A long dream of 400 years (came true) we were like dreamers.” Tel Aviv resident and author Mordechai ben Hillel Hacohen wrote, “Judea was conquered – Judea was freed.” Allenby’s name was not tarnished by the later British policy of the 1930s and 1940s, that backed off from the Balfour Declaration.