Would you believe that once upon a time Arab Muslim leaders were busy convincing Western Christian politicians to get onboard with the Zionist enterprise of reestablishing a Jewish state in the Middle East?

Kind of the opposite of what’s going on today, when most Arab leaders routinely call into question the legitimacy of Israel’s existence.

But in 1919, fresh off their victory over the Ottomans in World War I, the Arab world’s top leaders recognized the enormous benefits of having the Jewish people return to and reestablish sovereignty in the Holy Land.

Ironically, it was Christian politicians from the UK that needed convincing, despite the fact that it was their own government steered by Bible-believing men like Lord Arthur Balfour that had gotten the ball rolling on this idea of a restored Jewish state.

Among those British delegates to the Paris Peace Conference was Philip Noel-Baker, who would later go on to win the Nobel Peace Prize. At the time, Noel-Baker was a young rising star in British politics, and his support for various aspects of the deals and treaties being hammered out was seen as important.

But he was unconvinced that the promises made to the Jewish people in the Balfour Declaration of 1917 could be realized, that the Arabs would accept a Jewish state in the Middle East.

Noel-Baker is quoted as saying in the book End of Empire:

“I did not believe the Arabs would accept a Jewish national home in Palestine, but one of my colleagues took me to see the Emir Feisal in Geneva. T.E. Lawrence, the great friend of the Arab leaders, was with him and Feisal said that the arrival of European Jews with their energy and enterprise and modern scientific skills would be good for Palestine and good for the Arabs. It was that conversation which converted me to Zionism.” 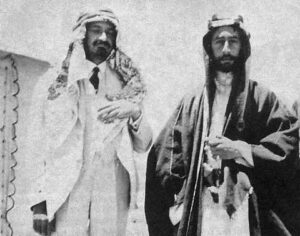 Feisal (r.) in Syria with Chaim Weizmann, leader of the Zionist movement and later first president of the State of Israel.

The Emir Feisal, ruler of Mecca, was in the wake of World War I seen as the de facto leader of the entire Arab world. T.E. Lawrence is, of course, the man we more commonly know as “Lawrence of Arabia.”

Twenty years later, in 1939, Noel-Baker appeared before Parliament to oppose British efforts to curb Jewish immigration to the Holy Land, again noting that the influx of Jews had been both accepted and welcomed by the Arab leadership.

In 1981, Noel-Baker was interviewed for the Israeli documentary Pillar of Fire, and recalled that eye-opening meeting with the Emir Feisal and Lawrence of Arabia:

“And when I got to the lunch [with my colleague], who were his other guests but Lawrence of Arabia and the Emir Feisal. And I was converted to Zionism by those two men. Feisal making his speeches, and Lawrence translated from the Arabic. And the Emir Feisal said to me, ‘Of course we want Zionists to come into Palestine. We know what will happen. They’ll bring vast sums of American and other capital, they’ll bring in the greatest scientists in the world, all the greatest scientists are Jewish, and the territory of Palestine, now so arid and so much of it a desert, it will become a garden and blossom like the rose. We shall borrow their experts, we shall work together, we shall do the same in all the countries which we Arabs have turned into deserts.’”

It is a shame that the Emir Feisal’s vision was never realized, instead being swallowed up by violent revolutions and radicalism.

But what is clear is that today’s Arab rejection of Israel and the insistence that Jews are foreign colonizers with no legitimate place in the Middle East is a relatively new phenomenon. Just 100 years ago, the leaders of the Arab world were eager to welcome the Jews home.