Have you ever wondered how the Israeli military overcomes superior enemy numbers and great odds to win its wars and protect its citizens?

A big part of the reason was an eccentric English officer stationed in British Palestine in 1936 named Orde Wingate. He had grown up reading his Bible in a staunchly Christian family, then morphed into a maverick army officer before being posted to the Promised Land. Here he finally found a great cause to which he could dedicate his life: facilitating and defending the return of the Israelites to sovereignty in Zion. Orde Wingate’s biblical understanding led him to see the growing presence of Jews in Palestine as a literal fulfillment of Biblical prophecies.

He and his young wife Lorna quickly became unabashed, outspoken, “dyed in the wool” Zionists. Wingate then wielded his Bible to develop revolutionary military tactics and bequeath them to a core of Hebrew fighters.

These tactics still form the central fighting philosophy of the IDF today. A young friend of mine who serves in the reconnaissance unit of the Givati infantry brigade told me in the early 2000s how the IDF trains its special forces. He told me how they send the infantry recruits out on grueling all-night long-distance navigational challenges, while loaded with ammunition, alone or in small groups – to simulate penetrating deep into enemy territory on foot for missions of surveillance, intelligence, sabotage, etc. Recently, the IDF trained my own son in these same special-forces tactics. (As parents, it is disconcerting to have your son or daughter come home for weekend leave and see how the IDF has made them accustomed to being awake all night.)

In the short span of less than three years in the Land, from 1936 to 1939, Orde Wingate left an indelible mark, and the IDF owes much of its success to his personal example and fighting tactics. 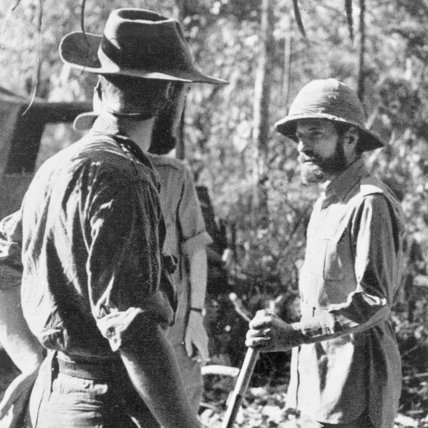 In 1943, Wingate (right), took his successful tactics to Burma, where he led guerrilla forces in harassing the Japanese occupiers during World War II.

These tactics were used by the IDF to free 102 hostages in a daring night-time raid on the Entebbe Airport in Uganda on July 4, 1976 – led by former Prime Minister Benjamin Netanyahu’s brother, Yonatan Netanyahu.

These same tactics of cunning and surprise with a small force were also used by Bibi Netanyahu and another former prime minster, Ehud Barak, to board a hijacked Sabena plane and free it in 1972.

The tactics have been used in thousands of other IDF operations, some publicly known, many still classified. One almost-banal application of these tactics is the way the IDF performs its preemptive arrests of suspected terrorists in the West Bank night after night, during hours when the chances of armed resistance are minimal.

Orde Wingate’s father George was a British colonel. Both of his parents were strong Bible believers and part of the Plymouth Brethren denomination. Orde grew up memorizing extensive portions of the Bible. ”Unlike many Englishmen of his class and generation, Wingate had not been brought up to disdain the Jews. On the contrary, as the child of dissenting Christian radicals he had been taught to have a particular regard for them as the children of the Old Testament…” (Fire in the Night, pg 64).

When Wingate was sent to Palestine by the British army in 1936, certain Arab rebel elements had begun, by night, to sabotage the pipeline that carried crude oil from Iraq through the Jezreel Valley and northwest to the Haifa refinery and port. England, on the verge of war, needed to protect its vital fuel supplies, but its traditional military forces found themselves stretched thin in Palestine and unable to cope with the havoc Arab insurgent gangs were wreaking.

In the upcoming second part of this feature we will learn of the revolutionary way in which Wingate waged war against this threat to both the British and Jewish presence; and instilled his “prophetic” passion, becoming arguably the single greatest influence on the as-yet-unborn Israel Defense Forces (IDF)) and its first commanders.