One pleasant, peaceful Saturday in late May, Aviel and I decided to take a day trip.

We live in the Judean Hills, among the most beautiful places in Israel. It is quite green here, relative to Israel of course????, with many vineyards, forests and picturesque villages. Sports enthusiasts come here from all over the country to jog, bike and walk.

So on that Saturday, we decided to drive down from the Judean Hills, where our home is located, to the Judean Foothills/Lowlands, and visit three Catholic monasteries there.

I was fascinated to see modern Israeli, Jewish tourists venturing onto islands of ancient Catholic culture in this land.

Israelis out for a Shabbat afternoon at a Catholic monastery.

The monastery is located on Route 38 east of Beit Shemesh. If you come from Beit Shemesh, and continue for a few minutes, turn left and continue up a winding road until you reach the monastery. Surrounded by olive groves and native vegetation, it feels like the land of the Bible, the landscapes where our ancient ancestors walked – Abraham, Isaac, the judges, the prophets, the kings.

The road to Beit Jamal feels like a scene straight out of the Bible.

When we arrived at the monastery, we were surprised by the large number of visitors, who came to be inspired by the atmosphere. We were also surprised to hear the Catholic nuns singing in Hebrew. It sounded like the praise of angels.

The monastery has a statue by Yigal Tomarkin, an Israeli sculptor. It has a concert hall, where concerts are occasionally held for the general public. It also has the first meteorological station established in the country (in 1919), as well as a shop for selling wine, olive oil and olives.

The name Beit Jamal in Arabic means “The House of Beauty.” Apparently, I am not the first person to have appreciated the beauty of the area. It is also the name of an Arab village that was there in the past.

In Christian tradition, the place is known as Gamla Village, taken from the name of Rabbi Gamliel, who was the leader of the Sanhedrin ruling body and grandson of the Elder Hillel. In the New Testament, the Apostle Paul refers to Rabbi Gamliel as having been his teacher (Acts 22:3). According to Jewish tradition, Rabbi Gamliel’s estate was in Gamla – Beit Jamal.

In addition, there is a tradition that St. Stephen is buried there. A Byzantine church was built to commemorate Stephen and later destroyed in the Persian conquest in 614 AD. In 1932, a new building was erected on the remains of the Byzantine church. St. Stephen’s Church has stained glass windows depicting important events in Jesus’ life, which modern Israeli Jews now come and absorb as culture and art:

There are also mosaics of the Last Supper, the sermon of Stephen, Adam and Eve, and the prophets of Israel.

In 1869, the Seleucian monastery purchased land to erect an orphanage and agricultural boarding school at Beit Jamal. These were built as part of a women’s monastery in 1873, to help orphans and poor families. Since 1988, the monastery has served the “Sisters of Bethlehem” community, nuns from France and Belgium who live a solitary life, make ceramic vessels and sell them.

In the monastery store I met the nun Anne Mileys, a very nice woman. She came from France and has lived in the monastery for about five years. She is already fluent in Hebrew. I bought gifts for my family and for my home as well, beautiful ceramic bowls made by the nuns. 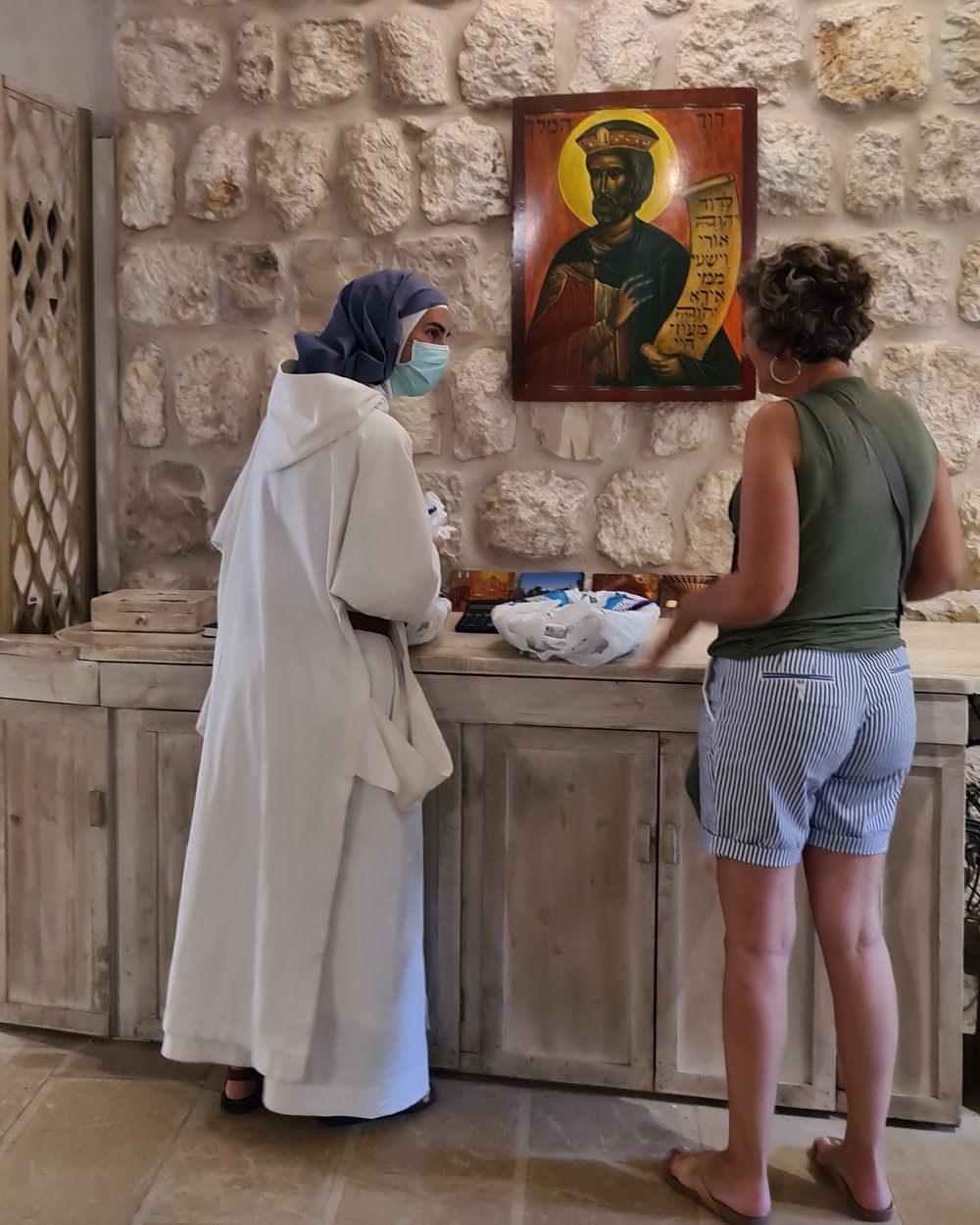 Chatting with Sister Anne Mileys at the Beit Jamal Monastery.

There is also a synagogue-like room in the monastery. It is mainly used for dialogue and reconciliation between Christians and Jews.

This monastery is about five miles west of Beit Shemesh. The road to it is surrounded by green vineyards reminding me of Tuscany. I had to pinch myself to wake up and realize this beauty is in my own homeland. Again, we were surprised by the number of visitors.

The vineyards of Deir Rafat can make one think they have been transported to Tuscany.

It was built by the Latin Patriarch in 1927 as a pilgrimage and prayer site. The church’s arched walls feature the words of the angel Gabriel: “Ave Maria” in 280 different languages. Of course, I immediately looked for the Hebrew. When I found it, I happily breathed a sigh of relief.

The monastery has an interesting oil painting of Mary the mother of Jesus extending her hands to protect the Holy Land. Fifteen nuns live there and take care of the place. The nuns are happy to host the tourists during the scheduled hours and with advance reservations. When we got to the church, we met a nun who was trying to hang the sign that had fallen, with a hammer and nails. “Well done,” I thought, “they do it all themselves.” 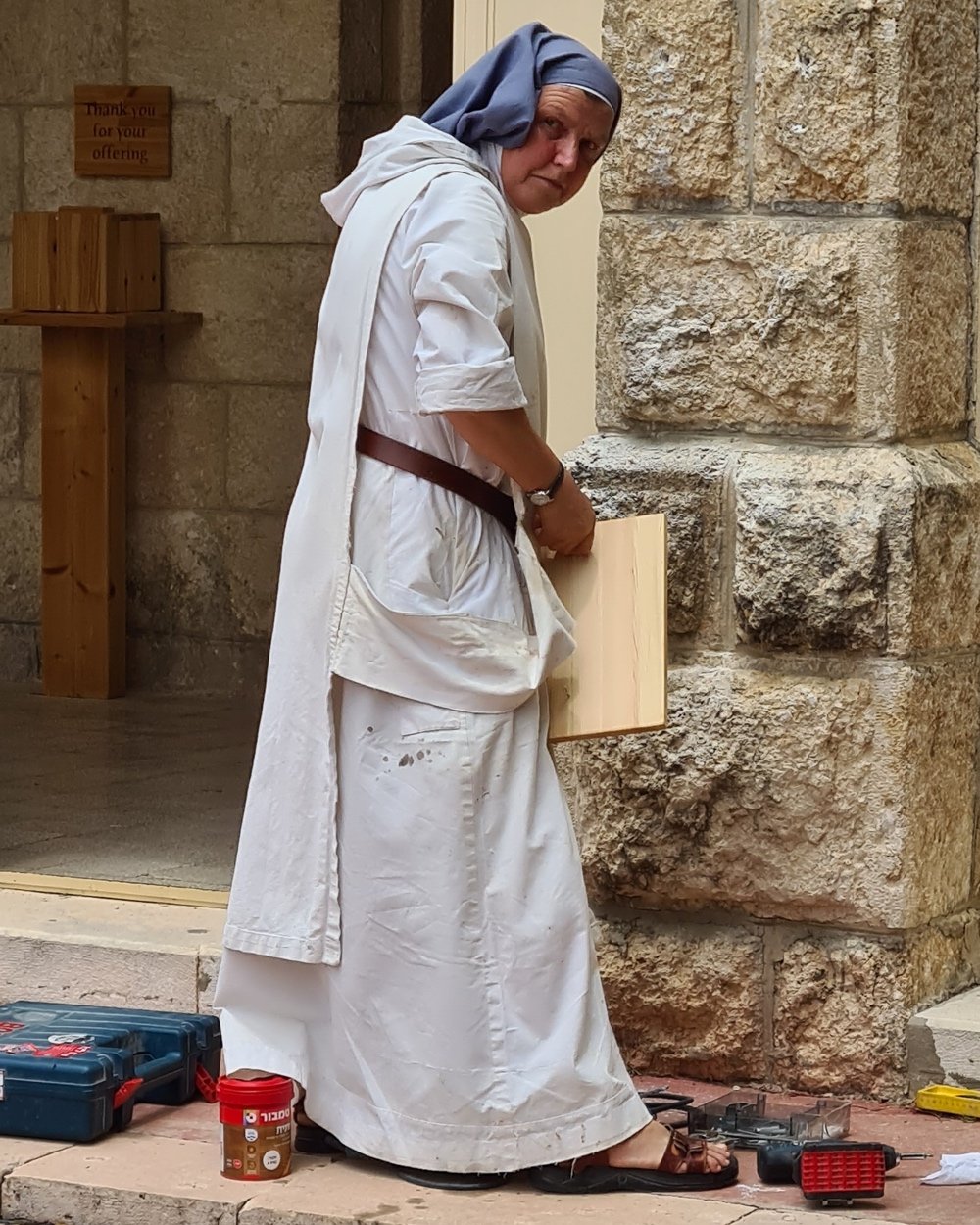 A Catholic nun and her power tools. If she doesn’t hang the sign, who will?

The nuns’ special artwork is on display in the shop at the entrance. You can find ceramics, hand-painted tables, sacred art sculptures, aromatic oils and sweets, all locally made.

Within the monastery compound there is also a winery. 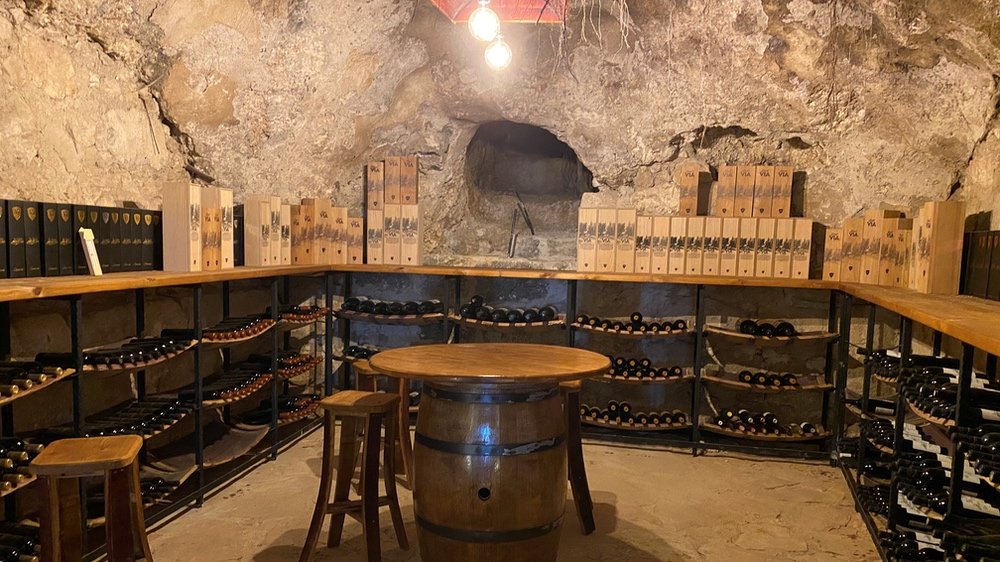 A wine tour and tasting can be arranged on site, plus there is a wine-selling shop, pickled olives, olive oil and more, all locally made. The wine is very good. They give the wine names that match the area, like Samson and Delilah – which is the exclusive wine in the series. (Samson grew up nearby.) Aviel always says that what sells the wine is the story behind it. 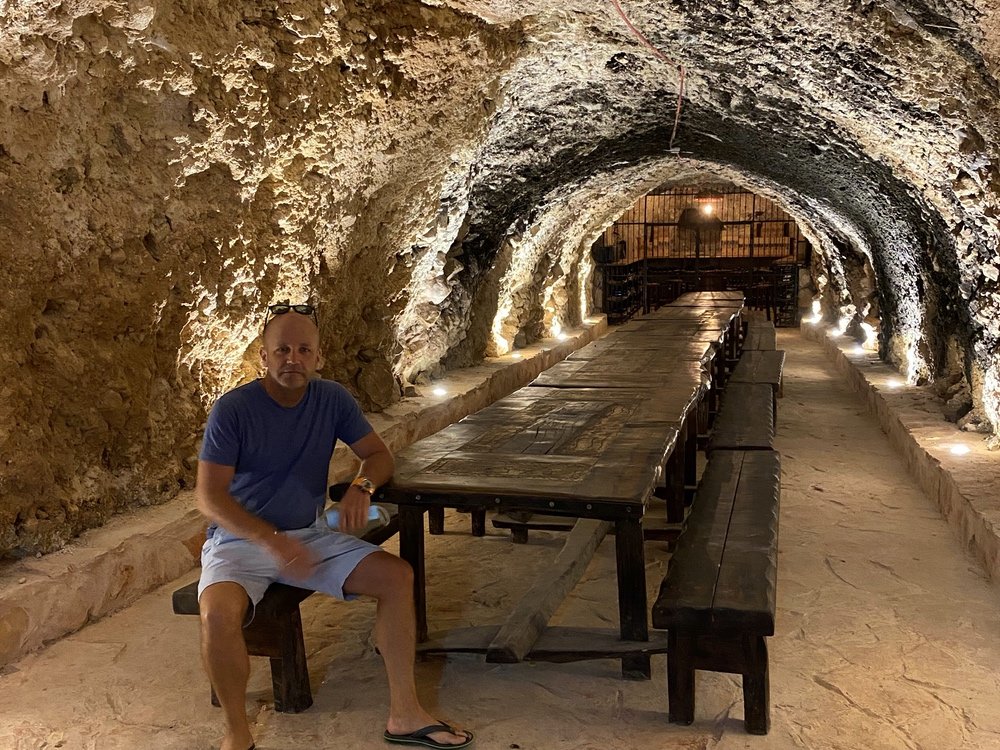 This winery made a smart marketing move several years ago when it decided to pay a Jewish overseer who makes sure the wine is “kosher” according to Jewish custom. So now Orthodox Jews are allowed to buy it. The winery workers cannot enter the winery without his supervision. On the other hand, because they are Christians, they can sell the wine on Saturdays and holidays as well!

The shop at Deir Rafat is popular with Israelis out for a Shabbat day trip.

At the entrance to the monastery, there is a gorgeous pergola with grapevines that give shade and refuge from the heat. The pergola overlooks the lush vineyards and magical landscape. You can bring your own food and set it out on one of the many picnic tables, plus you can buy locally made cheeses, as well as grapes and wine. The fragrances, tastes and sights, were a delight to the senses. 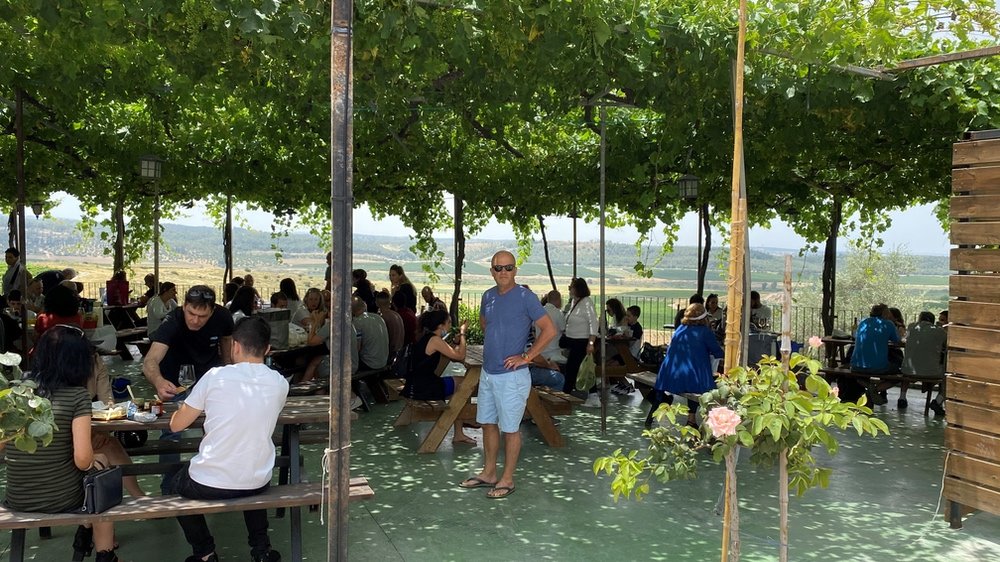 You won’t find a better view to enjoy with your lunch.

Latrun Monastery “Our Lady of the Seven Pains” – The Monks’ Silence

From Deir Rafat, we continued on to the Latrun Monastery, about 15 minutes away, near the main highway to Tel Aviv. This time we were no longer surprised that we found a huge number of visitors. There was a large bazaar in the lower courtyard selling jewelry, paintings and ornamental items. The charming monastery is located on the Ayalon Ridge overlooking the valley and its surroundings.

There are remains of a French Crusader fortress above the monastery, called the Knights’ Tower “Le toron des chevaliers.” Residents of the Arab villages called it “La-trun.” 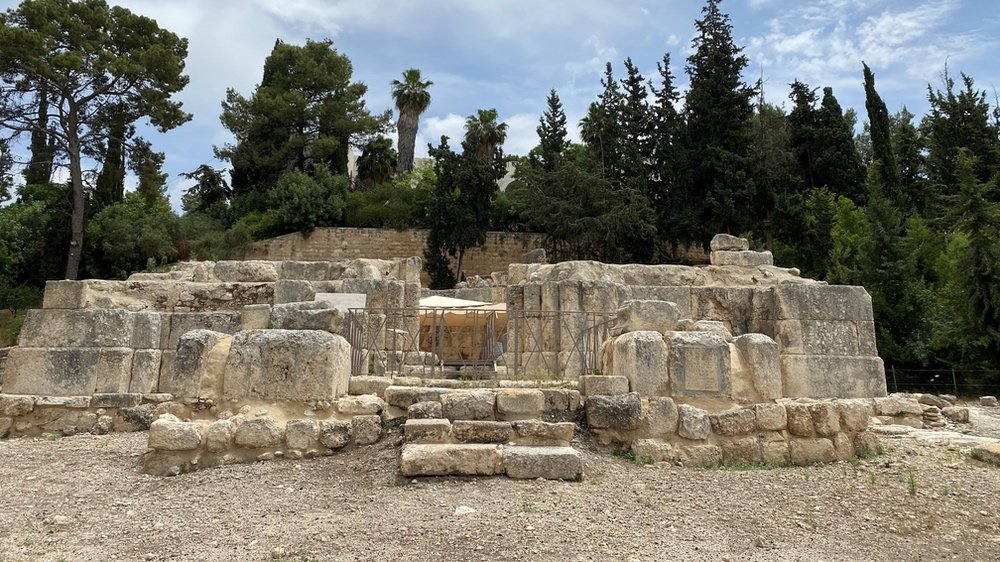 The remains of a medieval fortress at Latrun.

In 1875, Carmelite nuns purchased agricultural land from the inhabitants of the village of Emmaus. At the same time, a hotel was also built on the remains of the Crusader fortress to serve the travelers from Jaffa to Jerusalem and vice versa (a two-day trip). After the train track was laid to Jerusalem, visitor traffic at the hotel diminished and it closed. A Trappist monk bought the hotel and together with other monks founded the monastery. They planted olive trees, vineyards and a vegetable garden. They also maintained a clinic and library.

During World War I, the French monks were expelled from the country, and the monastery became an Ottoman military camp. It was badly damaged in the war, including destruction of the library. In 1919, the monks returned to rebuild, only to see their buildings again destroyed – in an earthquake in 1927. In 1929, the monastery was again rebuilt and expanded.

Entrance to the Latrun Monastery, which has had to be repeatedly rebuilt.

During the 1948 Israel War of Independence, the Latrun monastery was controlled by the Jordanian Legion. Only in 1967 did it come under Israel’s control.

This monastery is the only one in Israel belonging to the Trappists, and is also known as the Silent Monastery. The monastery lifestyle is based on simplicity and harmony. Monks there have taken the vow of silence. The monks make their living from agriculture and the winery located in the monastery. They have many vineyards and produce about a quarter of a million wine bottles a year. We bought a bottle of wine there and already tasted it. (I personally prefer the wine from the Deir Rafat Monastery.) The wine is sold at the Latrun monastery shop alongside other local products, such as honey, olives, olive oil, souvenirs and books. 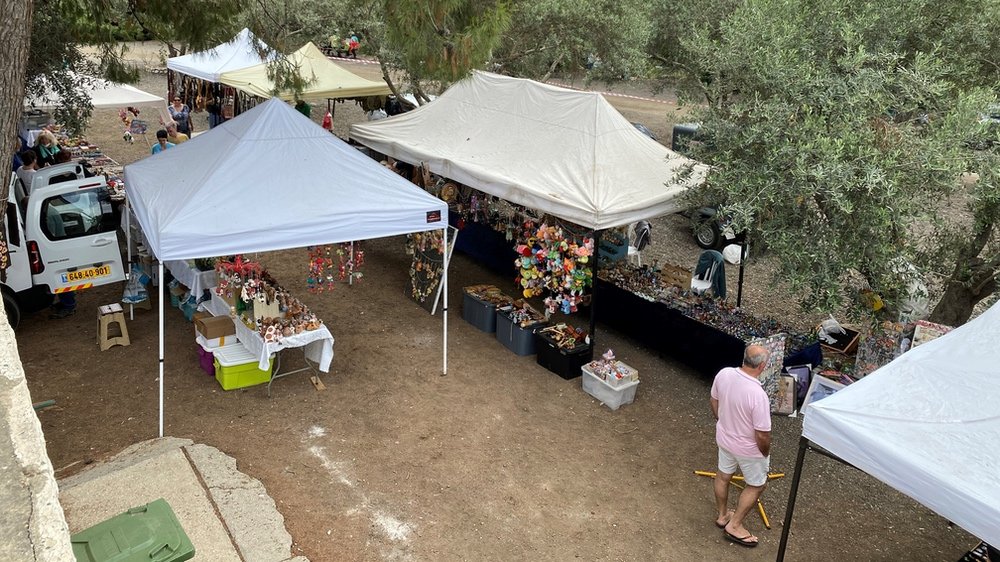 The Latrun Monastery hosts a bazaar for locally made goods.

The monks’ daily schedule is hard, but simple: Wake up at 3 am for prayer, then study, work and contemplation. Avoid eating fish and eggs.

In 2006, a monument was built in the compound featuring the three monotheistic religions. This “Brotherhood Garden” contains three figures who exemplified tolerance:

The Latrun Ridge is located in the Ayalon Valley and it strategically controls access to Jerusalem.

Among the famous battles fought in the area:

Likewise, the New Testament book of Luke records Jesus talking with two of his disciples on the way to Emmaus soon after he was resurrected.

Today, the Latrun region is a well-developed tourism area featuring agriculture and historical sites of the IDF and the Land of Israel.

We returned home from our lovely day trip to the Judean foothils with wine and gifts, but especially with music in our hearts. The world is a beautiful place where one can enjoy harmony even in the midst of diverse religions, customs and ethnicities, if only our hearts would be open to receive our fellow man.

As travel restrictions permit, we invite you to come, enjoy and tour this good land. We’re confident you’ll be like Joshua and Caleb, giving a good report about this land in Numbers 14:8, “a land flowing with milk and honey.”