Tensions in Israel have risen even further after the horrific terror attack in the city of Elad last Thursday. The two terrorists who carried out the attack have since been arrested, but it is expected that this will not end the wave of violence. Hamas, meanwhile, is pushing for another major confrontation with Israel and is constantly inciting the Arab masses.

After a three-day manhunt, special units of the Israel Police and IDF finally arrested the two terrorists who had brutally murdered three Israelis with an ax and knives at the tail end of the 74th Independence Day celebrations in the city of Elad last Thursday.

The two terrorists, Assad al-Rafai, 19, and Subhi Emad Subhi Abu Shqeir, 20, were from the village of Rumana near Jenin and were found hiding in a forest near Rosh Ha’ayin, a city near the security fence separating Israel-proper from the so-called “West Bank.”

They offered no resistance during their arrest, most likely because they were severely weakened by a lack of water and food.

The two terrorists likely attempted to cross the Green Line (the 1948 armistice line) where the security fence was constructed during and after the Second Intifada.

In reaction to the horrific attack in Elad, the IDF has now doubled the number of troops in Judea and Samaria and many of these reinforcements have taken up positions next to the security barrier.

The holes in the fence through which thousands of Palestinian Arabs illegally entered Israel every day have now been closed.

At least three of the seven deadly attacks that have ravaged Israel since March 21 were carried out by Palestinian Arabs residing illegally in Israel.

The number of fatalities from these attacks now stands at 19 and hundreds more will be traumatized for their lives. 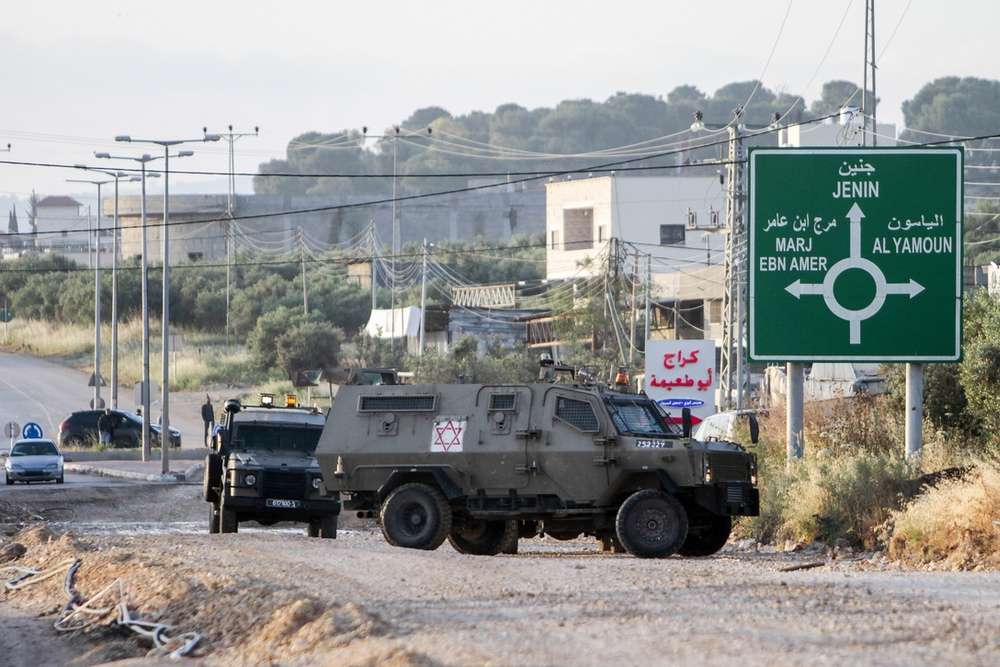 Israeli forces arrive in the flashpoint Palestinian town of Jenin to confront the terrorist infrastructure there. Photo: Nasser Ishtayeh/Flash90

More details about the Elad attack

Al-Rafai and Abu Shqeir first killed a taxi driver who reportedly believed they were legally in Israel and took them to Elad.

The terrorists told the taxi driver that they had to travel to the city for renovation work at a synagogue.

Oren Ben Yiftach, the taxi driver, had no doubts about the terrorists’ story as he had already taken them to Elad at least 10 times in the past.

Now, however, the father of six children was stabbed to death by the two Palestinian terrorists immediately after arriving at the synagogue in Elad. They then waited in the car with the dead driver for hours until it became dark.

Yiftach initially resisted but had no weapon with which to defend himself effectively.

When the two Arabs finally left Yiftach’s car they killed Yonathan Habakkuk (40) and Boaz Gol (40) both married and fathers of five children each.

According to eyewitnesses, Habakuk fought heroically with the terrorists in a bid to protect his seven-year-old son, who later witnessed how his father succumbed to his wounds.

The terrorists then went to a park where dozens of families were present for an Independence Day barbecue.

Police in Elad later said the two terrorists spent the night in a school close to the crime scene, where they consumed pigeons. They then fled from Elad and were finally found in a forest a kilometer outside the city.

Police and military special forces found blood-stained banknotes near the terrorists’ hideout after which a DNA test showed that the banknotes belonged to the terrorists.

Security forces in Israel now expect terrorist attacks to be carried out in Israeli cities throughout the year 2022, a prediction that turned out to be correct for the time being, as we shall see.

In reaction to the terror attack in Elad, Prime Minister Naftali Bennett ordered the formation of a National Guard that will consist of professional security personnel supplemented by armed civilian volunteers.

The guard will be deployed in places where the population is usually not in possession of weapons.

This mainly concerns ultra-Orthodox cities and residential areas where the number of gun licenses are low.

Stricter action will, furthermore, be taken against those who help Palestinian Arabs residing illegally in Israel with transportation or provide them with employment. 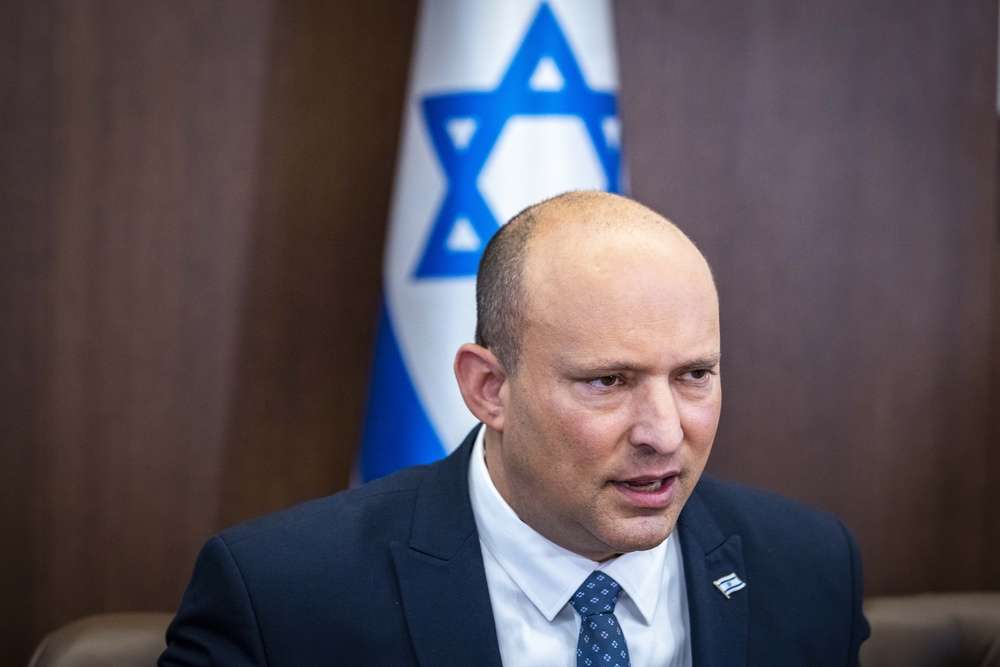 Prime Minister Bennett insists Israel will not be cowed by the latest terror wave, and urges citizens to carry guns and organize into civil defense forces. Photo: Olivier Fitoussi/Flash90

Political consequences of the terror wave

Bennett is in a difficult position due to the ongoing wave of terrorist attacks as well as internal problems within his coalition.

The Islamist party Ra’am is in fact holding the government hostage and is threatening to turn the temporary suspension of its participation in Bennett’s coalition into a permanent exit.

See: The Mystery of Mansour Abbas and Ra’am

Ra’am suspended its participation in Bennett’s government during the riots on the Temple Mount after the police entered the Al Aqsa Mosque where Palestinian rioters were attacking Israeli security forces with stones, Molotov cocktails and fireworks.

Without Ra’am, Bennett’s government will fall and the prime minister has recently made comments showing that he is very much aware of the possibility that this could happen.

The coalition currently no longer has a majority and has the backing of only 60 Knesset members, which is exactly half the number of lawmakers.

See: “Netanyahu was shocked, but I am at peace”

Criticism of Bennett’s handling of the current terror wave is growing among the public in Israel, as a large number of posts on social media show.

This is something that always happens when the Israeli security forces fail to stop a wave of attacks or when the IDF fails to decisively win a war.

This happened in 2001 when the government of Ehud Barak was overthrown following the failure of the police and the IDF to stop the wave of suicide bombings that then plagued Israel.

A similar thing happened after the Second Lebanon War, which ended without a clear victory by the IDF.

Ultimately, this, along with a corruption scandal, led to the fall of the Olmert government.

The current government now faces a dilemma about how to put an end to the wave of terror attacks, and seems to be influenced by fiery discussions on social media in Israel, where Hamas leader Yahya Sinwar is seen as the main culprit responsible for the ongoing violence.

Bennett knows that something will have to change to restore the public’s sense of security and therefore considers taking offensive measures next to the new defensive ones.

One of the offensive measures that now is being considered is the assassination of Sinwar, who recently called on Palestinian and Israeli Arabs to start killing Jews with every weapon they could get their hands on.

Sinwar, an arch-terrorist who spent 14 years in Israeli prisons, is the most fanatical Hamas leader.

During a recent speech that was broadcast by Quds TV in Gaza, Sinwar advised Palestinian Arabs in Judea and Samaria to use knives and axes in order to murder Jewish Israelis.

As we now know the terrorists in Elad used knives and an ax in their gruesome attack.

During the same speech Sinwar, furthermore, warned that his organization would unleash “a regional religious war” against Israel in the event that the “Zionist entity” again “desecrates” the Al Aqsa Mosque on the Temple Mount.

Such a war was going to change the face of the world and scorch the earth, Sinwar bragged.

In Israel, there are those in the security establishment that doubt the wisdom of eliminating Sinwar. They point to the fact that earlier targeted assassinations only sparked more terror and violence by Palestinian Arabs.

Hamas responded to the discussion about the possible assassination of Sinwar by threatening new rocket attacks on central Israeli cities and a resumption of suicide bombings.

On Sunday evening it turned out that the prediction of the security services about the continuation of the terror wave was correct.

First, an attack was reported near the Old City of Jerusalem during which a police officer was stabbed in his neck, wounding him moderately.

An hour later, four terrorists attempted to enter the village of Tekoa south of Jerusalem. One of them managed to climb over the security fence of the village and was then shot dead by a member of the local civilian security squad.

The man was together with his wife and children drinking tea on the porch of their home when the terrorist approached them wielding a knife.

After spotting the terrorist the man asked his wife and children to go into the house after which he took his M-16 rifle and shot the terrorist, who later died of his injuries.