More than a year after the signing of the Abraham Accords, one could say that these agreements between Israel, Bahrain and the United Arab Emirates (UAE) have been a resounding success. The accords have already led to other normalization agreements with Arab countries and are likely to lead to more peace agreements.

The latter cannot be seen in isolation from Iran’s increasing threat not only to the region but also to the rest of the world.

Last Sunday, December 12, Israel Prime Minister Naftali Bennett flew to Abu Dhabi in the United Arab Emirates. It was the first official visit of an Israeli Prime Minister to the UAE, and Bennett received a red-carpet welcome to the Arab country.

Before flying to the UAE, Bennett said relations with the important Gulf state were “excellent and extensive” and that he plans to nurture and strengthen those relations.

Once in Abu Dhabi, Bennett’s first meeting was with Crown Prince Sheikh Mohammed bin Zayed, and this meeting was followed by talks with the Minister of Culture and the UAE Minister of Industry.

Bin Zayed assured the Israeli Prime Minister that he greatly valued ties to the Jewish state and said he hoped “more positive steps would be taken that would serve the interests of the two nations.”

Why was the Israeli media excluded?

Shortly before flying to the UAE, Bennett canceled the usual briefing with many of the Israeli reporters who were to travel to the UAE with him.

There has been speculation that this could be related to dissatisfaction with the Israeli government’s foreign policy and to the recent rapprochement between the UAE and Iran, which shows increasing disregard for efforts to negotiate a new and improved nuclear deal with five world powers and the United States.

In Jerusalem, this was seen as a sign that the newly-acquired ally cannot be completely trusted and that Israel should focus on strengthening economic relations with the UAE for the time being.

For more on this worrying development, see: Showing – the Fatal Flaw in the Abraham Accords

These economic relations have greatly improved this year with an increase in mutual trade amounting to EUR 450 million ($508 million). That was a 300 percent increase over the trade balance in 2020. 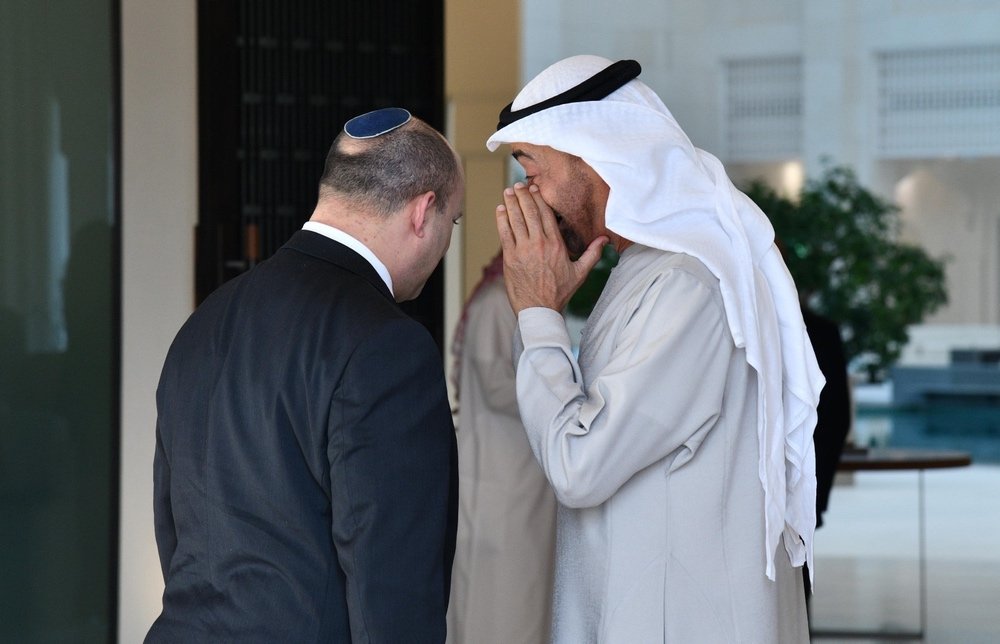 What did these two discuss when no one else was allowed to listen?

Bennett put the issue of Iran high on the agenda of talks with UAE leaders, according to insiders.

The emergence of UAE-Israel relations in August 2020 had everything to do with mutual fears about the increase in Iran’s cloud over the Middle East, according to these observers.

Bennett’s behavior prior to his visit to the UAE could be linked to fears of putting a strain on the fresh relations with the Arab Gulf states.

The media in Israel is known for its bluntness and its critical stance on Bennett’s foreign policy, which could explain why the prime minister barred reporters from his entourage.

The prime minister only gave an interview to the WAM news agency in Abu Dhabi, in which he spoke in vague terms about further improving relations with the Arab country.

During the interview, Bennett avoided saying a word about the growing tensions with Iran and only talked about cooperation in the economic sphere and in the fields of science, aviation and cyber security.

The Israeli Prime Minister called UAE citizens “cousins” and “the grandchildren of the Prophet Abraham.”

That showed that he understands the culture in the Arab world, but also that he had no intention of speaking publicly about the shared concerns regarding Iran.

Those concerns sparked another unprecedented development last week with Morocco, another Arab country that recently made peace with Israel.

During a historic visit to Morocco, Israel Defense Minister Benny Gantz and his Moroccan counterpart H.E. Abdellatif Loudiyi signed a groundbreaking deal in the field of defense.

“The agreement provides a solid framework that formalizes defense relations between the countries and provides a foundation that will support any future cooperation. It will enable the defense institutions of both countries to benefit from increased intelligence cooperation, industrial cooperation, military training, and more,” the government’s official press office (GPO) said in a statement.

“The agreement is an important step in deepening relations between Israel and the Kingdom of Morocco, which are already benefiting from increased economic cooperation, bilateral tourism, and warm relations between citizens,” the statement continued.

Gantz also emphasized Morocco’s role in maintaining “regional peace and stability” and emphasized the need to achieve normalization between Israel and new partners in the Middle East in the “face of the threats.”

By mentioning unspecified threats, Gantz was undoubtedly referring not only to Iran, but also to the Palestinian terrorist movements in Gaza.

The new peace agreements between Israel and a number of Arab countries have also improved relations with Egypt and Jordan recently.

Both countries maintained a ‘cold peace’ with Israel, but that has changed since the Abraham Accords.

At the beginning of his premiership, Bennett flew secretly to Jordan and recently made an official visit to Egypt where he spoke with President Abdel Fatah el-Sisi about improving mutual relations.

El-Sisi shares Israel’s concerns about Iran and the growing danger posed by terror movements in Gaza, and showed off the Israeli flag during the meeting with Bennett.

The concerns in Egypt and Israel over the increasing threat by the terror groups in Gaza are understandable.

Hamas, for example, has now partially taken control of southern Lebanon and is building weapons depots that will later be used against Israel.

One of those weapons caches exploded last Saturday, killing at least 20 Lebanese civilians and members of Hamas.

Israel, meanwhile, continues to hold secret talks with Saudi Arabia’s leadership, according to Israeli TV station KAN 12. It remains to be seen if these talks will eventually result in an official normalization agreement, but it is encouraging that the countries have developed a sort of relationship that contributes to stability in the Middle East.

This also has to do with the fact that many Arab countries feel insecure in light of the ever-increasing threat from Iran.

The ever-growing threat from Iran will be discussed in a follow-up article to be published later this week.