Protests against the Palestinian Authority (PA) and its leader Mahmoud Abbas continue unabated after more than 20 PA policemen brutally beat to death human rights activist Nizar Banat on June 20. The Palestinian population apparently passed the point of no return and shows no sign of giving up. This, however, is not related to the death of Banat but to disgust with the corrupt Abbas regime.

Israel, meanwhile, chose not to react to Abbas’ latest overtures on peace but instead opted for a policy of withholding funds that the PA uses to pay terrorists and their families before a new ‘peace process’ could be be organized by the United States.

“Bring back the Israeli occupation!”

On Monday of last week PA security forces brutally harassed four Palestinian journalists who covered a demonstration against the Abbas regime in Ramallah. The protests began after the murder of Nizar Banat but the main factor that drives the demonstrators is disgust with the Palestinian Authority and its leader Mahmoud Abbas in particular.

Abbas is widely unpopular among the Palestinian Arabs and apparently feels his rule could come to an end if the protests become mass demonstrations. The 86-year-old Palestinian leader claims that Hamas, his arch-nemesis ex-Fatah leader Mohammad Dahlan, and Islamist groups like Hizb ut Tahrir are behind the protests.

However, several demonstrators who didn’t even bother hiding their identities openly told reporters that they are fed up living in a “police state” under “a dictatorship.”

One of them was Abu Shaker Milhem who even said that he preferred to live under Israeli rule once again.

“Bring back the occupation! Our people are no longer able to pay the price of two occupations (one by Israel and the second by the PA). Yes, we want to return to the days before the 1993 Oslo Accords, which have become a new Nakba for our people,” Milhem said. 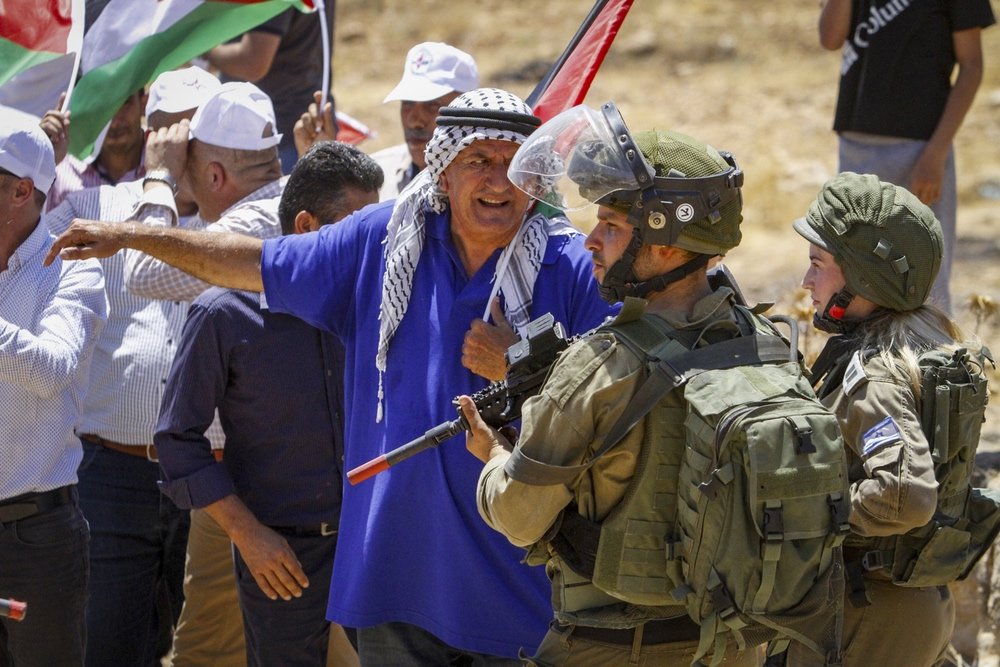 Given the instability, rampant corruption and repression, many Palestinians would even prefer a return of Israeli “occupation.” Photo: Nasser Ishtayeh/Flash90

The straw that broke the camel’s back for most Palestinian Arabs was Abbas’ decision to cancel the parliamentary elections on May 20 and the presidential election that was scheduled for the end of June.

Ever since Abbas announced his decision at the end of April, Palestinian Arabs took to the streets or wrote about their discontent with the PA leader on social media. In these posts they condemned Abbas for his repressive measures against protesters and journalists.

The PA leadership failed to recognize the anger of the Palestinian population and to understand that there is now a new generation that wants regime change, just like most Arab dictators failed to understand that their constituents wanted a different life during the ‘Arab Spring’ and were prepared to risk their lives to obtain the changes they wanted.

Opening the door to Hamas

What is already clear now is that Abbas has lost all credibility and legitimacy among the Palestinian Arabs, and this an ideal breeding ground for Hamas and other Islamist groups.

Hamas has just appointed a new commander for its Izz-a-Din al Qassam Brigades, the military wing of the group. The Gaza-based terror organization is currently preparing for more resistance, and this time not against Israel, but against the Palestinian Authority in Judea and Samaria.

Abbas is now playing the ‘Israel card’ and makes overtures to the international community and the Israeli government that should show his interest in resuming the peace process. After the new Israeli President Isaac Herzog was sworn in, Abbas called him and suddenly declared he wanted peace with Israel.

However, this appears to be a transparent attempt to regain his lost prestige and to divert attention from the discontent that has now fueled repeated protests against Abbas and the PA.

According to Israel’s Channel 12 News, the PA leadership has an extensive grocery list of preconditions for renewing peace negotiations. The list will be presented to the Biden Administration next week.

Israeli Prime Minister Naftali Bennett will also receive a copy of the list and most likely will reject the PA demands.

The PA demands that Israel reopen the Orient House in Arab Jerusalem. This mansion was used by the PA for political purposes, something that was forbidden under the Oslo Accords. Orient House was closed by the Israeli police in 2001 during the first year of the Second Intifada after the PA started to use it as a headquarters.

Restoring the status quo on the Temple Mount is another demand of the PA and Israel must reduce police activity near the Al-Aqsa Mosque, as well as reduce the number of Jews that visit the holy site.

The PA, furthermore, demands that Israel cease evictions of Arabs from their homes in Jerusalem. This is clearly a reference to a recent court order that enabled the eviction of Arab squatters from the Shimon HaTzadik, or Sheikh Jarrah, neighborhood in the vicinity of the Old City of Jerusalem.

The PA also demands a total halt to settlement construction and to Jewish building projects in what is commonly called ‘East Jerusalem’ (in fact, most Arabs live in northern Jerusalem).

These are not all the demands the PA listed. Israel must also allow Palestinian Arabs into the country to reunify with their Israeli Arab families. In addition, Israel must issue more work permits for Palestinian laborers and return confiscated weapons from the Palestinian security forces.

The Israeli Security Cabinet, meanwhile, decided to freeze funds that are used by the PA to execute its ‘pay to slay’ policy. Israel collects taxes and import duties on behalf of the PA which are subsequently transferred to jailed Palestinian terrorists and their families.

The Defense Ministry Economic Counter-Terrorism Staff in Israel reported that the Palestinian Authority transferred NIS 597 million ($182 million) in indirect support of terrorism in 2020.