Throughout history Jews were often recognizable by their clothing.Most of the time they were forced to wear certain clothes tot make them stand out. Often, however, these fashions were the result of self-imposed dress codes.

Jewish tradition teaches that the Israelites in Egypt were highly esteemed by God for dressing differently from their hosts, and there are still strict dress codes today, especially for women. It is particularly important for them to dress modestly, i.e. not to flaunt their charms. The same goes for men, but who finds a scantily clad man sexy? Here the emphasis is more on looking respectable.

The Hebrew word for modest, tsnu’ah (צנוע), is also sometimes translated as “humble” or “meek.” It’s more than just about how one dresses, it’s an attitude or a state of mind. One should see oneself as a spiritual being and put one's physicality in the background, just as Judaism tries to strengthen the soul in all areas of life and pushes back the naturally dominant physical body.

But back to clothes. Today you can recognize Orthodox Jews not only by their kippah, but also by their mostly black and white clothing. Some wear fur hats, some long coats, some elegant suits, but you can almost always tell that they are Orthodox Jews and not lawyers. When I came to Israel in 2007, like many tourists, I was shocked by the men with long beards in their thick coats walking through Jerusalem in the middle of summer. How it came about that today's Orthodox Jews walk around in Israel like Europeans did 200 years ago is a long story, but it achieves its purpose, they are recognizable as Jews.

The fact that these clothes do not fit with our oriental climate is evident to the nose of anyone who rides on a crowded bus in summertime. Older Bedouins also dress a little thicker and will never be found in shorts and flip-flops. Their traditional clothing is even reminiscent of what the biblical Israelites would have worn, if one considers the clothing of the high priest as described in our weekly Torah portion, Tetzaveh. 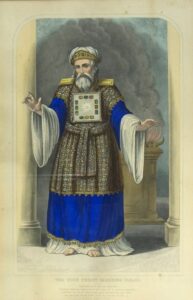 This Torah portion describes in great detail what Aaron would wear in the Tabernacle. The poor man must have worked up a sweat with all the layers he had to put on. I began sweating just reading about it, and it’s winter here right now. Aaron had to wear these clothes all year round, and without air conditioning!

There is one thing I like, though, and that is the turban. In many translations it’s described as a “headband” or other such headpiece, but in most of the illustrations it is shown as a kind of turban. I know from experience that this is a very comfortable head covering in this part of the world. Before I came to Israel, I visited Petra, Jordan. I had forgotten my hat and the closer it got to noon, the more the sun burned my bald head. Fortunately, a Bedouin was selling what looked like towels that could be tired around one’s head. I bought one and the Bedouin tied it up for me. I still remember how relieved I was afterwards. 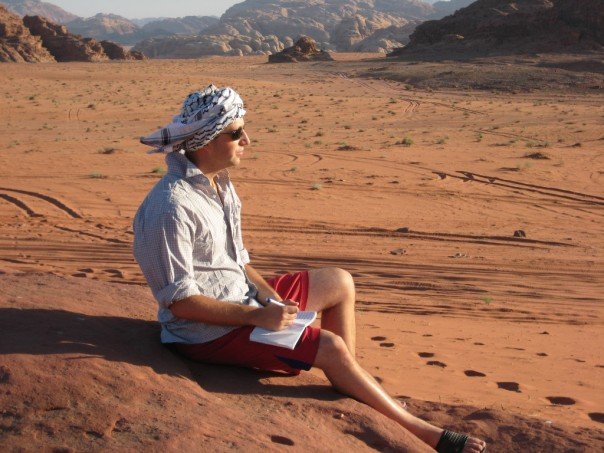 The turban was light, but did it’s job keeping the sun off my head. What’s more, sweat was no longer running down my face, but was rather being soaked up by the cloth, resulting in a kind of air conditioning for my head. I was thrilled!

We have today returned to our ancestral land and no longer need to dress like outdated Europeans. Wouldn't it be great if we could go back to the clothing of our forefathers? I’m all for wearing turbans again!