About 20 high school students from the city of Optov, Poland participated for the first time in an online memorial service in memory of the Jews who perished in the Holocaust. Of the 5,000 Jews living in Optov in central Poland, only 300 remained alive, one of whom was 97-year-old Eliyahu Zilberberg from Tel Aviv who told them about life in the town and eventually showed them the number that the Nazis tattooed on him at the Auschwitz concentration camp: B-1111.

The students were amazed to see Zilberberg’s forearm with the tattooed number. “That was my prisoner number at Auschwitz. The Germans may have called it ‘elph elph’ and translated from the German it’s ‘eleven, eleven.’ During those years in the camp for the Germans I was only a number.”

The meeting, which was held over Zoom, was very moving, and for the Polish students it was the first time they had met a Jew who had lived in their city and survived the Holocaust. The encounter was also emotional for Zilberberg himself, who for years had told the story of the town in Israeli schools, but this was the first time that he was bringing the Jewish story of the town where he was born to the Polish students who live there today. 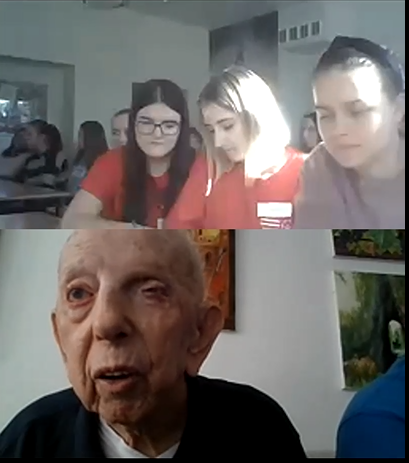 The students listened attentively, and asked Zilberberg a lot of questions. Part of the conversation was in Polish. “The Polish children were thrilled with the fact that I speak their language. This was a very special meeting. I told them where I had lived and about Jewish life before the war and during the war. Today they know about the streets, houses, and events of their town in which half of the residents, about 5000 people, lived, with a vibrant Jewish life until the Nazi occupation. The students were astonished to find out the truth of what happened when I showed them the number tattooed to my arm.”

During the memorial service, the survivors said Yizkor prayers and paintings were presented by Meir Kirschenblatt depicting Jewish sections of the town after the war in his memory. Now the Polish students want to continue to meet with Zilberberg over Zoom and to hear his stories.

Zilberberg passed through the agony of the Holocaust including labor camps, the Auschwitz death camp, the month-long death march to central Germany until he was sent by freight train to the Buchenwald concentration camp where he arrived as a skeleton of a man (muselmann). His mother, his younger brother, his grandmother and his cousin were sent to the Belzec extermination camp where they perished. His father returned after the Holocaust to Optov but was shot and murdered in cold blood by a gang of Poles. For this, Zilberberg does not forgive the Poles to this day.

About life in Auschwitz, he says: “It was a nightmare on earth. It takes a special talent to describe the SS reception. Surrounded by electrified barbed wire fences and lots of barracks and guards. After all the hair was removed from the body, we entered the chamber with showerheads installed in the ceiling. Your first thought, ‘what comes next, water or gas?’ Suddenly there’s a spray of boiling water for a few minutes and then you’re immediately pushed to the next chamber where we received striped camp clothes and your forearm is tattooed with a serial number. I was given the number B1111. The barracks commander elder informed me that I was one of those chosen to be sent to work for Germany. The first thing I wanted to do was to say goodbye to my father who was in a nearby barrack. We shook hands through the barbed wire and it was the last time I saw or heard him. His last words were: “If you stay alive, don’t go back to Poland. Go to Palestine.”

“In the Buchenwald camp, I lived in Block 65, which was considered a block for the disabled. The March left me alive, but I remained a ‘Muselmann’: a human skeleton. Fortunately for me, after two months, on April 11th, 1945, I was liberated by the U.S. army and their devoted care got me back on my feet. Every April 11th, I celebrate the liberation of Buchenwald concentration camp. This was my own private exodus after losing my entire immediate family in the war: my parents, my brother, my grandmother and more. It’s been about 76 years since the day the American army liberated me from the camp. I was a wreck, physically devastated but spiritually intact. I felt like a human being, I had understanding, an inner freedom and a sense of value. During all my years in the camps, I had a purpose and a dream for the future. The goal of living as a free man, to return home, not to Poland, but to the Land of Israel. This belief which I was brought up with in my youth gave me the strength to struggle, survive and fulfill my dream.”