After dinner at the beginning of Shabbat on Friday evening, Anat and I decided to celebrate Christmas Eve in the Old City of Jerusalem. Interestingly, the weekly Torah portion on Christmas Eve was about the birth of Moses, the first Savior of the people of Israel. Jews and Christians celebrated the birth of their respective Saviors, Moses and Jesus, on the same weekend.

Around nine o’clock in the evening we parked our car at the Zion Gate and strolled through the alleys of the Old City in the direction of Christ Church near Jaffa Gate. We initially thought to attend mass at Dormition Abbey, but the church was closed. Dormition Abbey is a German-speaking Benedictine abbey on Mount Zion.

The usually deserted and dark alleys were overcrowded with people that evening. Either Orthodox Jews who went for a walk after the Shabbat meal or Israelis who wanted to visit the various churches and masses in Jerusalem’s Old City at Christmas. In addition to the black hats of the Orthodox Jews, red and white Santa Claus hats were seen in abundance. Everything was right that evening. Christmas Eve in Jerusalem in the Christian and Armenian Quarter is something very special. Like being transported to an earlier time. 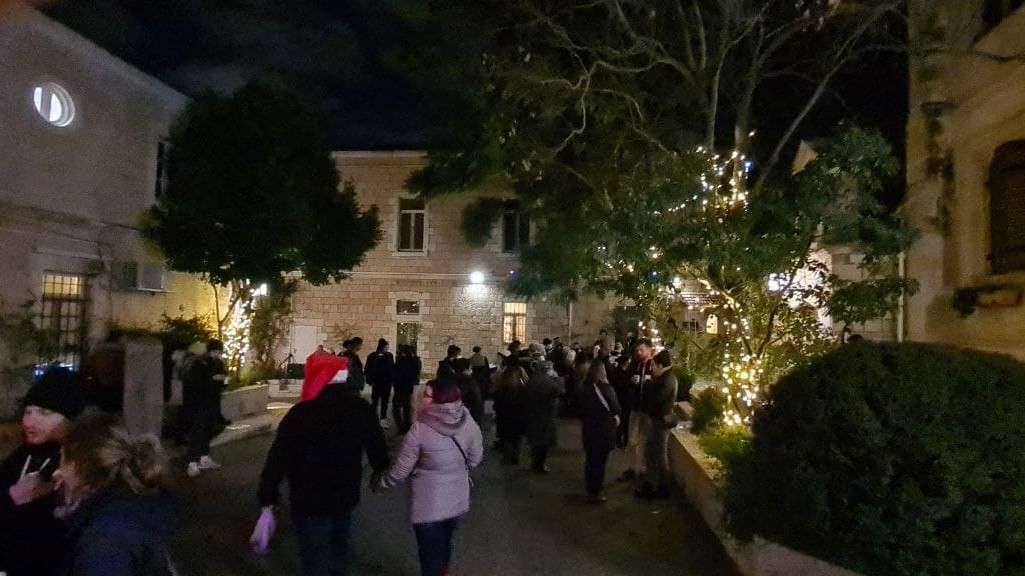 The courtyard of Christ Church near the Jaffa Gate. Photo: Aviel Schneider

There was a public happening at Christ Church, which is a meeting place for Messianic Jews. Numerous Israelis visited the church and, in addition to the explanations, there was also mulled wine. See: Should Messianic Jews Celebrate Christmas?

We continued through the alleys to the Greek Orthodox Patriarchate, and then visited the Terra Sancta Church. It is a Catholic church with Latin prayers and incense.

Inside the Terra Sancta Church for Christmas Eve prayers and carols.

As we continued our walk, someone recommended that we go to the Church of the Redeemer. We passed the Church of the Holy Sepulcher and reached the Lutheran Church. There everyone had to show their green vaccination card to enter the church. Before the beginning of the mass, all Israelis were welcomed to the Christmas ceremony in Hebrew. Apart from the sermon, the mass was entirely sung, even the Gospel of Luke. The church was full, the majority probably Israelis. When the musical director started the choir with “Silent Night, Holy Night”, he called on the audience to sing along after the first verse. It echoed in the church, it sounded as if everyone was singing along, including the Israelis next to and in front of me.

The Lutheran Church of the Redeemer was packed for Christmas Eve Mass.

Israelis also sang along with “Daughter of Zion.” All music sounds nice in a church. The acoustics are wonderful. After the mass, mulled wine was distributed outside the church and the Israelis loved it.

The night was cold, nearly freezing. Here and there we met friends on the way who all wanted to visit the various Christmas fairs. Then we continued through the Via Dolorosa and everywhere small groups of Israelis could be seen, to whom the birth of Jesus was explained on the night of Christmas Eve and how Christianity developed from Judaism over the millennia. An exciting story that takes on new depth and meaning in the alleys of Jerusalem’s Old City.

Jerusalem is the center of the world, this is where it all began. A controversial city that almost never really comes to rest. But that night everything was quiet, with the story and the birth of the Savior in mind. A silent and holy night in Jerusalem.