A day after International Holocaust Memorial Day, it was reported that swastikas were found drawn onto the columns at Union Station, a 105-year-old train station where Amtrak stops in Washington, DC. Just a couple blocks away from Capitol Hill, it is considered a national tourist destination and one of the most important metro stops in the American capital.

Amtrak condemned the swastikas, as did Senator Bob Menendez, who called the display “sickening.” The Washington, DC Chapter of the Anti-Defamation League stated: “This hateful act is incredibly alarming. Once again, this teaches about the need to teach about antisemitism and hate.”

The Jewish Federation of Greater Washington concurred in a recent tweet: “We are disturbed by this video of a swastika. This hateful and anti-Semitic symbol has no place in our society and to find it in our city on the week of International Holocaust Memorial Day is particularly offensive.”

In fact, even CAIR, who are known for their anti-Israel advocacy, did have the decency to welcome the arrest of the perpetrator of this antisemitic attack: “We hope that swift police action sends the message that antisemitism and all other forms of bigotry will not be tolerated in our society.”

Nevertheless, this incident makes one ponder, if swastikas can be drawn onto such an iconic historic landmark in the United States, can the Holocaust occur on American soil?

Jonathan Greenblatt, CEO of the Anti-Defamation League, recently published a book titled It Could Happen Here, in which he argued that it is within the realm of the possible: “What once appeared impossible has become possible. Consider this: Nobody would have guessed that one day we would see brazen and violent attacks on innocent Jews in places like midtown Manhattan and downtown Los Angeles. And yet, that’s exactly what happened.”

According to Greenblatt, “None of us want to believe that America could end up like Germany in the 1930’s. As the American author Sincair Lewis ironically titled his 1935 novel—published before the full horror of Hitler became apparent—It can’t happen here. Even today, nobody wants to believe that illiberalism, fascism and violence could unfold on our shores. But I wrote this because we must confront that possibility.

Greenblatt stressed that genocides become possible “when an underlying social context of hate arises and solidifies over time. From inside that context, hate seems normal and not especially dangerous. Someone shouts a slur at you or spits on you on the street or they refuse to serve you at a restaurant, or they break off a friendship with you. Life might be unpleasant, but it is not intolerable. And then, one day, the unthinkable happens.”

As Gideon Taylor, president of the Claims Conference, stressed: “The Holocaust started with words. These were hateful words that were yelled in the park, spat on the street, and roared in the classroom. These words alienated, belittled, and shocked, but worse, these words gave birth to the horrific massacre of six million Jews.” 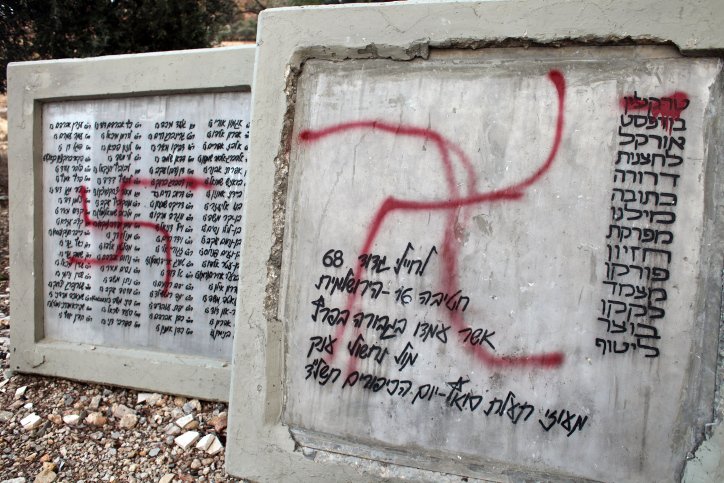 In the United States, the level of antisemitism has significantly risen in recent years. As Greenblatt wrote in his book, “America is a society saturated in hate. The ADL’s own data shows that the United States saw over eleven thousand incidents of extremism or antisemitism in 2019-2020, from coast to coast. Across society, hate is at an all-time high, with numerous groups emerging across the ideological spectrum. Hate groups are also more emboldened than they’ve been in recent memory.”

For example, in the 1990’s, when I was but a middle school child, I was physically assaulted by antisemitic teenage girls who yelled at me “why don’t you burn something,” in reference to the Holocaust and called me a “Jewish bitch” while throwing a chair at me. When a teacher intervened, they broke that teacher’s arm, and she was in a cast for six months. Although this incident was horrific, it occurred in a boarding school in a rural area of Frederick County, Maryland, and not within cosmopolitan society. Indeed, most of the cosmopolitan Jewish kids who grew up in my neighborhood and did not venture out to such areas did not have these kinds of experiences.

And even there, the girls were widely condemned by both their peers and the school staff, and swiftly punished. Back then, many in the Jewish community in America felt it was unheard of for such a thing to happen. It was a crime that could only occur in such rural areas. We were after the fall of the Jim Crow South and before the dramatic rise of antisemitism that accompanied the ascendency of US President Barack Obama.

Throughout high school and most of my college years, which fell during the presidency of Bill Clinton and later George Bush Jr., I did not have to deal with well-organized anti-Israel activities. In my high school, which was located in the Greater DC Area, I studied only with enlightened individuals, many of whom had parents who worked for the US government. Also, the Muslims I studied with were nice and friendly to the local Jews. When I went away to college, life was not as pleasant. Yes, I did have anti-Israel teachers and had to deal with antisemitic comments from some individuals, but antisemitic events were not organized where I studied.

But in the spring 2009 semester, when I was a college senior, the Muslim Student Association at the University of Maryland, which at that time was the most pro-Israel campus in America, organized a Palestinian Solidarity Week, where they compared the State of Israel to Nazis and accused the Jewish state of implementing a “holocaust” against the Palestinian people. They featured a speaker named Mauri Salaakhan, who claimed: “Israel has no more right to exist than apartheid had”; and Allison Weirs, who referred to Judaism as a “ruthless and supremacist faith” in an opinion piece she wrote in the Greenwich Citizen. Anyone who had the courage to confront them was denounced in the school newspaper, the Diamondback.

A year after that, one year after my college graduation, a chapter of the Students for Justice in Palestine opened on campus and they brought in a series of antisemitic speakers, one of whom declared: “The only good Zionist is a dead Zionist.” Around the same period, an apartheid wall was built on campus. And then, about a decade later, swastikas started to appear on many university campuses, including the dormitories of the University of Maryland of College Park. Around the same period, swastikas were spray painted on Jewish landmarks, such as synagogues and cemeteries. Washington Hebrew Congregation, my childhood synagogue, was one of the Jewish sites to suffer this fate. This was accompanied by the massacre at the Tree of Life Synagogue and a Chabad House in Poway, and the harassment of religious Jews in major cities like New York.

This later led to the zoom-bombing of Jewish webinars with antisemitic imagery, including a Save the West webinar that I attended. In fact, Greenblatt claims that Neo-Nazis have even interrupted Jewish funerals over Zoom, thus depriving Jewish mourners the ability to mourn their dead properly during the pandemic. This zoom-bombing has been accompanied by the massive looting of Jewish shops and institutions in Los Angeles and other cities during the pandemic. This was followed by antisemitic imagery being displayed during the storming of Capitol Hill and even in the elevator at the US State Department. 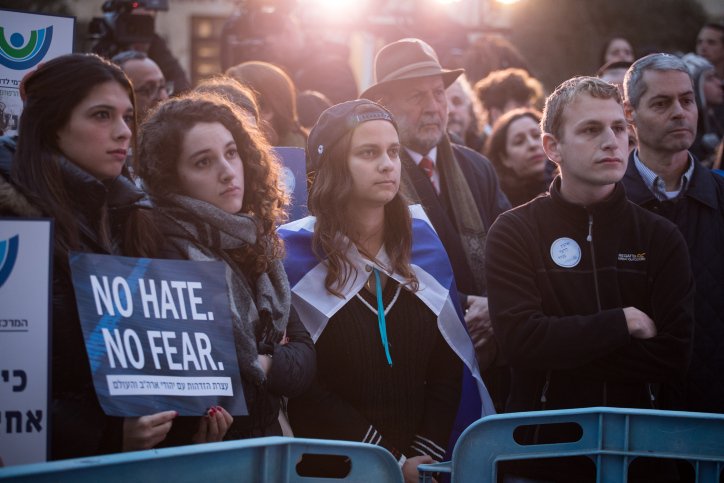 Where will it end? If history has taught us anything, nowhere good. Photo: Hadas Parush/Flash90

All these incidents led us to the point now where swastikas were drawn on an iconic landmark like Union Station in Washington, DC. This makes us ponder, if things have been steadily escalating like this, what will happen next to American Jewry? In this ground-breaking book, Greenblatt discuses a Pyramid of Hate. In this pyramid, at the bottom, there are biased attitudes, where people are raised to stereotype people in a certain way, which leads us to act out on that bias, which is the second level on the Pyramid of Hate: “Acts of bias take many forms, including insensitive remarks, ethnic jokes, name calling and slurs. This category varies widely in terms of the seriousness of the acts, ranging from non-inclusive language to bullying and dehumanization.”

Greenblatt claims that this gives rise to “systematic discrimination,” when discrimination is “enshrined in law and becomes common practice, affecting virtually all aspects of everyday life.” According to Greenblatt, systematic discrimination in America is already in place both for women and African Americans. He claims when systematic discrimination becomes the norm, this leads us to “bias-motivated violence,” which “isn’t much of a stretch. This category spans from vandalism of property and severe harassment all the way up to murder and acts of mass violence.” And at the top of the pyramid, there is genocide, which he noted not only includes the Holocaust, but also the Rwandan Genocide, the Yezidi Genocide, the destruction of minority populations in the former Soviet Union and the ethnic cleansing of Muslims in Bosnia during the 1990’s.

Thus, Greenblatt concluded that “the path to genocide might be shorter than you think. The pyramid overlaps with other theories about possible warning signs of genocide. One academic expert cites the presence of hate propaganda in the media and elsewhere and the presence of unjust discriminatory legislation and related measures as warning signs of genocide. Both are reflected in the Pyramid of Hate. Another model, known as ‘The Ten Stages of Genocide,’ lists discrimination, dehumanization, and polarization as steps on the path of genocide. The prevalence of hate speech and hateful actions of increasing intensity and virulence should set off societal alarm bells.”

In the book, a survivor of the Bosnian genocide, Columbia University Professor Sabic El Rayees, has a warning for Americans: “From where I sit, the US has moved through most of the steps of societal disintegration that I witnessed in the former Yugoslavia.” She claims that hate is leading Americans to “dark places, faster than they might think.” She says that genocide was also unimaginable in the former Yugoslavia and that she had underestimated the power of dehumanization.

In conclusion, Greenblatt proclaimed: “Even if organized mass genocide is not on our doorstep, and I desperately hope it is not, broad civil unrest, sporadic clashes and widespread tribal violence no longer seem unimaginable. Hate is insidious. It is growing. And its terrifying in its destructive potential. We cannot wait for others to stop it. We must stop it ourselves while we still can.”