In trying to pay my annual membership subscription to an Israeli news site, I hit a brick wall – twice. The technology refused to work, which about sums up the world’s political climate at the moment.

And yet there is a focus on Israel as never before, but nobody has been able to work out a solution. Except, it seems, a much vilified businessman vying for re-election as U.S. President.

When all is said and done, and the inevitable battery of insults have been traded, and protestors have run out of steam, the question needs to be asked. What has this election been all about, and why has it produced the kind of trouble and strife not seen since the aftermath of the American Civil War?

It’s clearly because so much is at stake, and a battle of the ages has commenced that could well usher in the return of our Lord and Saviour – a classic conflict between good and evil, between the children of darkness and the people of God, as Catholic Archbishop Carlo Maria Vigano put it in his open letter to the President, in which he also warned of an emerging so-called Great Reset and New World Order justified by the Covid pandemic.

The blindness to the bigger picture behind what the mainstream media paint becomes obvious once you start interpreting the social and geo-political changes we are seeing from a biblical point of view.

For centuries, Christians around the world have prayed for the peace of Jerusalem, as they are commanded in Scripture (Psalm 122:6). And all of a sudden, the intractable Israeli-Palestinian debacle takes on a whole new light as a succession of Arab countries begin normalising diplomatic relations with their former enemy.

An unprecedented peace process has well and truly trumped the many pundits who were predicting mass protests and violence from the Palestinians. Mr Trump has almost singlehandedly changed the game by taking the ball of contention out of the hands of the chief protagonists.

The United Arab Emirates, Bahrain and others are seeing the pragmatic sense of looking to their own interests rather than blindly pursuing a hostile policy that has yet to produce any lasting fruit.

Meanwhile nations, though waiting to see which way the wind blows, are lining up to move their embassies to Jerusalem in recognising the city as Israel’s ancient capital, following the bold lead taken by President Trump early on in his term.

The new Arab-Israeli deals are a part-fulfilment of Isaiah’s prophecy of a highway of peace in the region (Isa 19:23-25) and a sneak preview, surely, of the time when the Prince of Peace, Jesus the Jewish Messiah, places his feet on the Mount of Olives and brings an end to war (Zech 14:4, Acts 1:11). And yet what deep divisions arise when such apocalyptic issues are at stake.

If your focus is limited to domestic politics, you will not see the wood for the trees. Yet even in this realm (and I’m not saying he’s a saint), Mr Trump has dared to oppose the mass slaughter of innocent, unborn babies, which doesn’t seem to worry his opponents one iota.

But a clue to the bigger picture was the sight in Gaza of Palestinians burning images of Donald Trump alongside those of Lord Arthur Balfour. Who? Exactly. He was the man behind the so-called Balfour Declaration of 1917 who, as British Foreign Secretary, promised that his government would do all in its power to re-settle the dispersed Jewish people in their ancient land. 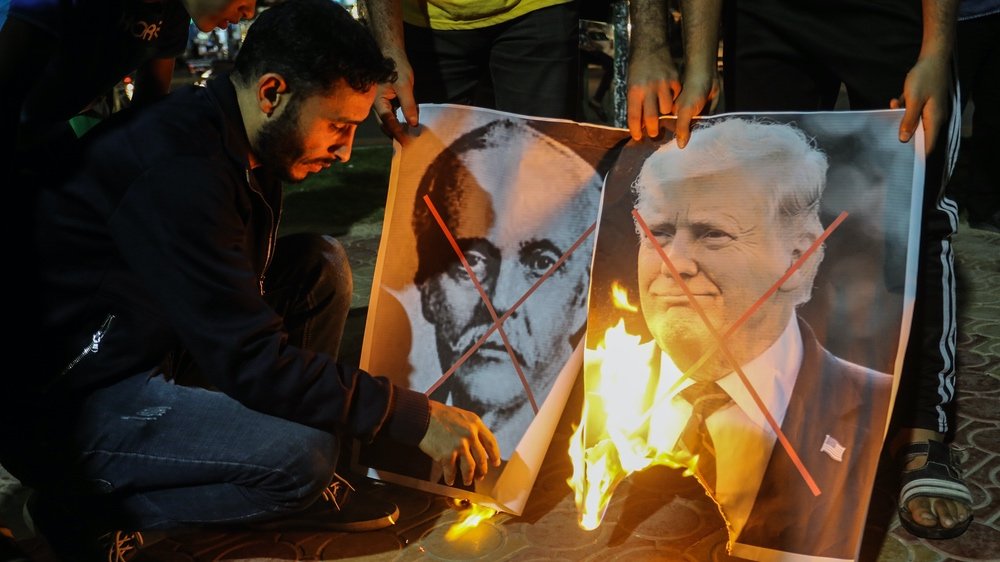 Palestinians burn images of Donald Trump alongside those of Lord Arthur Balfour earlier this week in Gaza to mark the anniversary of the Balfour Declaration.

To the intense chagrin of Arab opponents in particular, and left-wing politicians in general, this has been the focus of conflict ever since – something that will continue (despite valiant peace efforts along the way) until Jesus returns after an alliance of nations attack Israel from the north and are soundly defeated at Armageddon (Ezek 38, Rev 16).

One of the greatest ironies of all this is that, while most Israelis see Trump as a firm friend they wish to stay in the White House, most of America’s five million Jews support Biden (70% according to the latest poll), following in the Democratic tradition of Jewish Americans, who define themselves as liberals and identify with the party’s economic and social values.

You could argue that their position reflects more concern for their own comfort than for their ultimate destiny in the Land itself. For Biden was Vice-President to Barack Obama, perceived by many as the most anti-Israel President in US history.

Judging by the warring tribes in America, peace still seems far off. But don’t despair. Jesus has a word of encouragement for his followers when they see the world in turmoil as we are seeing today. Talking with his disciples about a time when nations would be “in anguish and perplexity” and “people will faint from terror, apprehensive of what is coming on the world…”, Jesus explained: “At that time, they will see the Son of Man coming in a cloud with power and great glory. When these things begin to take place, stand up and lift up your heads, because your redemption is drawing near.” (Luke 21:25-28)

If you are not yet a Christian, it’s not too late to put that right. Turn to him now. He will be there for you! He says: “Come to me, all you who are weary and burdened, and I will give you rest.” (Matt 11:28)

Millions can attest to the truth of an old hymn based on this theme, which includes these lines: “I came to Jesus as I was, so weary, worn and sad, I found in him a resting place, and he has made me glad.” (Horatius Bonar, 1808-1889)