In the city of Japruzza, the local rabbi received about 100 non-Jews with their dogs, cats and even an aquarium with fish: “Your destiny is also our destiny,” he said.

Rabbi Nahum Aarantroy is the rabbi of the city of Japruzza in southeastern Ukraine, which is now in the line of fire. “We’re hearing the sound of explosions all the time. After Kharkiv, the Russians will enter our city. I’m at home or in the synagogue, so I don’t take any chances. We’re in a war zone. I am at home with people in the community and in the synagogue there are 350-400 people who are concentrated together, most of them Jews and also non-Jews who begged us to open the synagogue because we have a shelter – it is not officially a shelter but a basement floor covered in concrete.”

Since the fighting began, dozens of non-Jewish Ukrainians seeking asylum have been knocking on the gates of the synagogue. “This is a synagogue and the Russians will not harm this place,” they explained in their desire to join the Jews.

The community couldn’t turn away the non-Jews. In the synagogue about 100 non-Jews who came with their dogs, cats, and even a little girl who came with an aquarium with her fish were sheltered. “I felt a bit like Noah in the ark,” the rabbi joked, even though he admits that the atmosphere around is more like hysteria.

Ukrainians believe the Russians won’t attack a synagogue, and so are beseeching local Jews for shelter.

“There’s something about the synagogue that calms people down. They are bringing children, babies even. By being in a basement and a closed place they are more relaxed. We’re trying to calm them down. We made food for them. I told them it wasn’t a shelter – they said it didn’t matter and that you wouldn’t be harmed because it’s a synagogue. We’ve stockpiled enough food. We bought a lot of food – and hope it will suffice. The sound of explosions can be heard from all sorts of places in the city. I’m in touch with Jews from all corners of the city. Sometimes there are louder explosions. The Russians are trying to get into the airport – I’m in contact with the security forces and they haven’t succeeded.”

Aarantroy says Ukraine has a fighting resolve. “Today, a few hours ago, weapons started to be distributed here to anyone in the city that wanted them and who had an identity card. A few days ago I would have said that I feared that the Ukrainians could do nothing, but now there is a fighting spirit and strong unity, and they are putting up a determined fight. I can’t tell what’s going to happen in the end. My biggest fear is that once the Russians see that they are being repelled, there could be a situation – where they will start hitting civilians and indiscriminately bombing from above, civilians and buildings. Secondly, they could enter with tanks and artillery and kill innocent civilians. Non-Jews see that we all share in the same fate. I told them that we would do what we could to help them.”

Rabbi Aarantroy also responded to requests from hospitals and sent medical equipment that the Jewish community had accumulated as part of the establishment of an aid mechanism of the European Rabbinical Association in the style of “Yad Sarah,” an Israeli nonprofit that provides medical equipment such as canes and walkers to those in need. “We sent the equipment to the hospitals. We received requests from people who came from the line of fire. I told the Ukrainians: their fate is our fate and therefore we will help.” 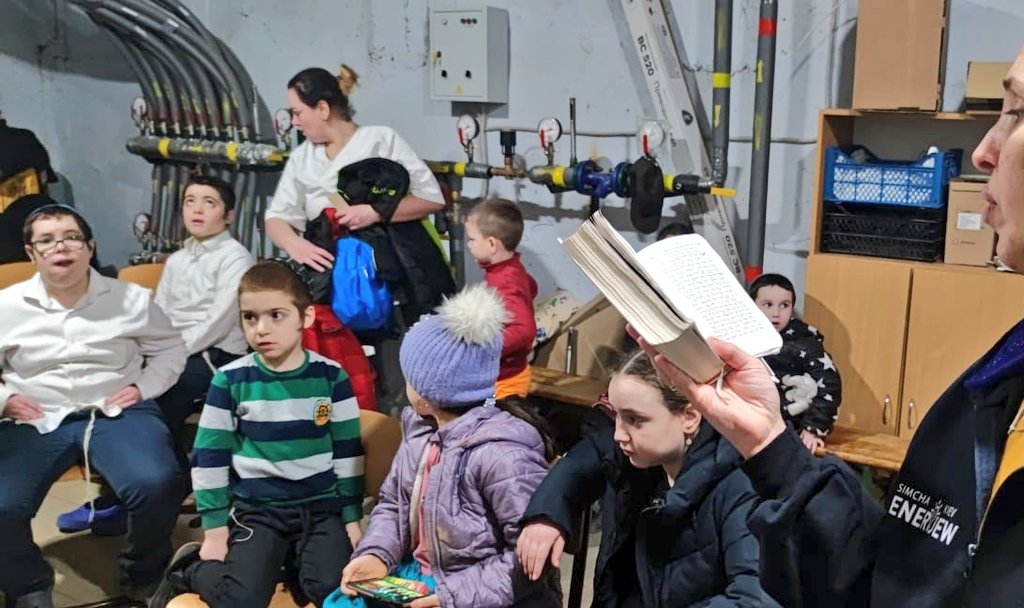 Rebbetzin Miriam Moskowitz, a Chabad representative in Kharkiv, found herself with her husband right on the front lines of the fighting. “Now we are in the hottest place in Ukraine. In the background you can hear booms. From Thursday you could hear the bombs but it was at the entrance to the city. There were no sirens. There was heavy fighting. I did not expect it to be so difficult to enter the city. All Saturday we were in the synagogue. Some people have been sleeping there from the beginning. On Shabbat we were 150 people. We were praying all the time. We danced in the synagogue. There is a basement and the kitchen is in use all the time – not just for Jews. There are non-Jewish people – we do not ask who comes. What happened is in the morning the Russian tanks started to enter the city and at 7 in the morning someone said he saw smoke in the direction of the synagogue. I saw that at the large mall that is near the synagogue a Russian tank was on fire. A half-hour later a non-Jewish family came to us whose house was on fire and they had nowhere to live. The rabbi invited them to the synagogue. All day we received requests from Jews. A woman who lives next to a large nine-story building that was hit by a missile in the middle of the night – called crying to bring her to the synagogue. But they told everyone not to go out. You hear shots and booms all the time. We told her that when it would be calmer, we would bring her to the synagogue, and that was that.”

“We want it to be quiet. We want everyone’s prayers to cause a great miracle and that it will stop today. It’s been going on too long. It’s hard to believe that in our time you see something like this. We left the synagogue on Friday at the being of the Shabbat. It was completely dark – my daughter said, ‘It looks like the Holocaust.’ I told her we were not talking about the Holocaust – and in the end it will end well. But we need miracles, and fast.” 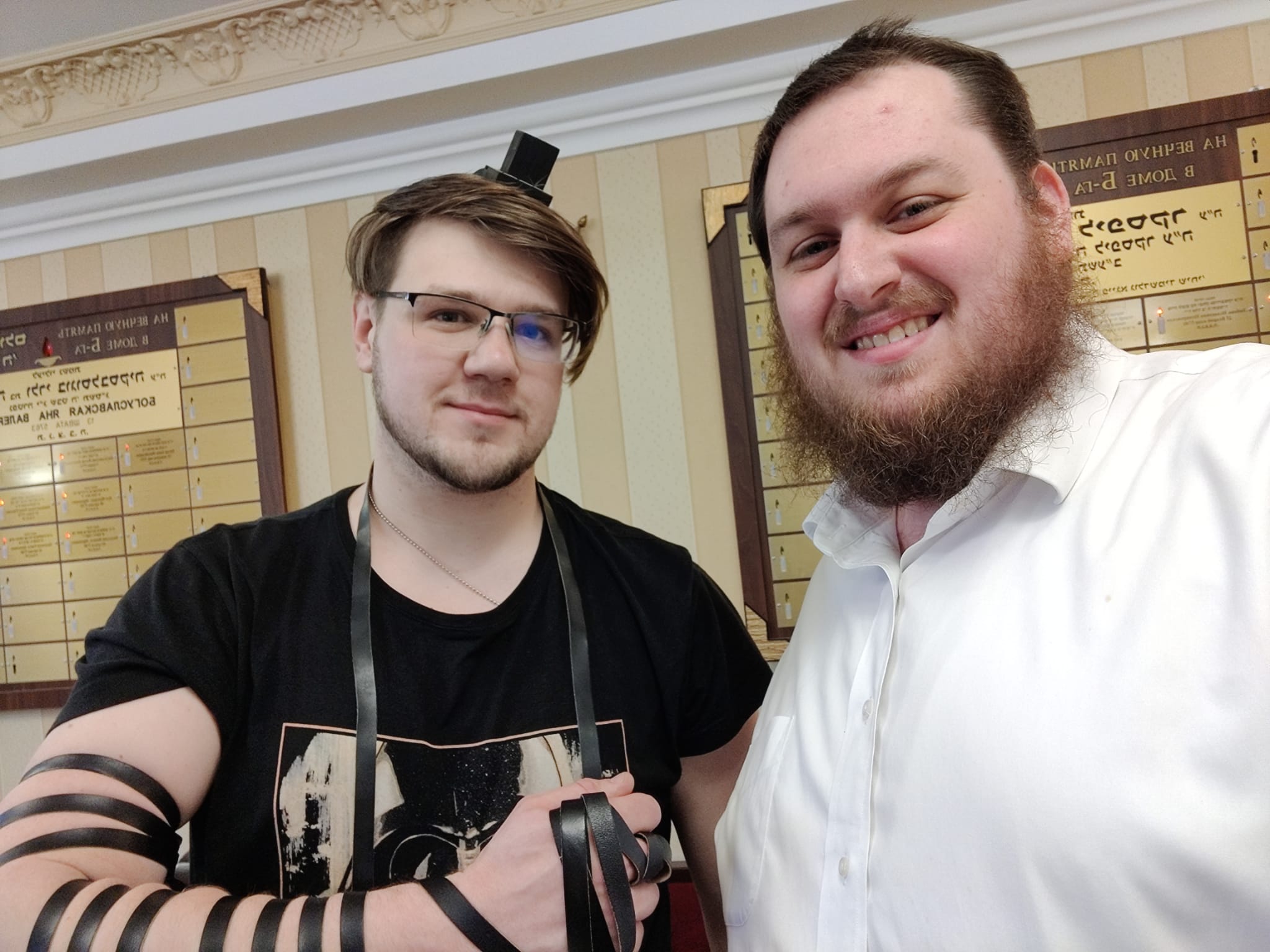 A young Jewish Ukrainian soldier comes to say prayers before rushing back to the front lines.

Rabbi Simcha Levenhertz is the son of a Chabad member in Kiev who runs a Jewish school with nearly 400 Jewish students. A thriving congregation. On Thursday, he was awakened by the sound of explosions and air raid sirens.

Simcha, a new father with a 4-month-old baby, decided to quickly leave for the city of Poltava, a distance of 300 kilometers to the east of Kiev in the direction of Russia. They’re now an hour and a half from Kharkiv. “A young Jewish man came to Poltava and was recruited into the army – he served a few days on the front lines. Today he received a release for a few hours and first thing – he called us and said that he wanted to come to the Chabad House to lay tefillin (phylacteries) – he was really under pressure every moment to go back to the front. It was a very moving moment, to see a Jewish soldier who understands what really supports him.”

Meanwhile, at the Jewish school in Kiev, about 100 people are sitting in the basement. There, too, non-Jewish neighbors came crying and literally begging for shelter. They went through a rough Saturday with shelling. “Without a choice, everyone huddles together. There’s no place for everyone to lie down. They make sure that the children are able to sleep. The children are traumatized. The parents take shifts huddling on chairs. There is still food but it is running out.”