One of the UAVs was downed by an Israeli F-16 fighter jet, while the other two were intercepted by the INS Eilat missile corvette, according to the IDF. All three were shot down over the Mediterranean Sea, the IDF said.

The UAVs flew at low speed and low altitude in an attempt to bypass Israel’s detection and interception systems, the military said in a statement. However, they were detected “at an early stage” before being intercepted “at the optimal operational point,” the statement continued.

An initial investigation suggests the drones did not pose an imminent threat, according to the IDF. 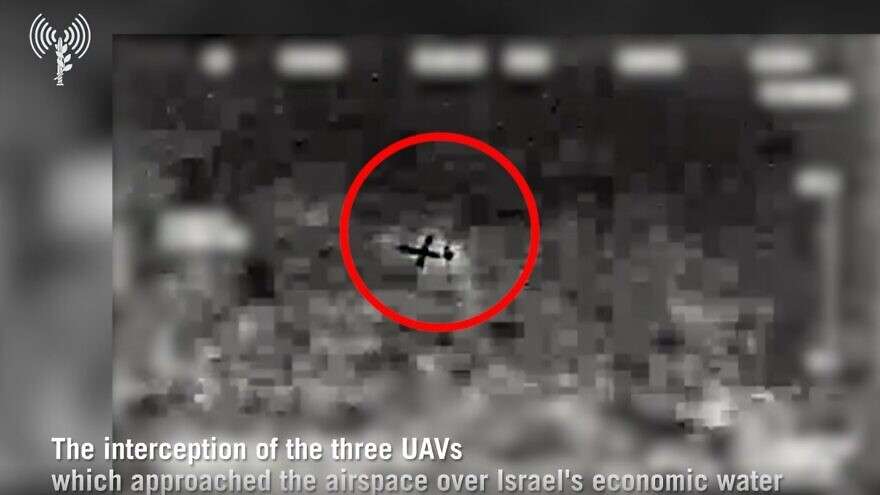 A still image from surveillance footage of a Hezbollah-launched drone flying toward Israel’s Karish natural gas platform, prior to interception, on Saturday July 2. Photo courtesy of the IDF Spokesperson’s Unit.

The incident comes as Israel and Lebanon have been engaged in indirect negotiations designed to settle a dispute over their maritime border. The economic waters of both countries are believed to contain large quantities of natural gas, in addition to the large discoveries made by Israel in recent decades. Talks between Israel and Lebanon have been mediated by the United States.

In June, Hezbollah threatened to attack Israel’s offshore gas-drilling activities in the Karish gas field, off the coast of Haifa, over the unresolved border issue.

On June 6, Hezbollah warned that it was ready to take military action against Israeli gas production operations after the Greek-British company Energean sent a gas production ship to the area ahead of expected extraction work.

On June 9, Hezbollah chief Hassan Nasrallah called Israeli gas activities in the area “provocations.” He said that any Israeli drilling that takes place in advance of an agreement will be considered a direct assault on Lebanon. “All options are on the table,” he warned. 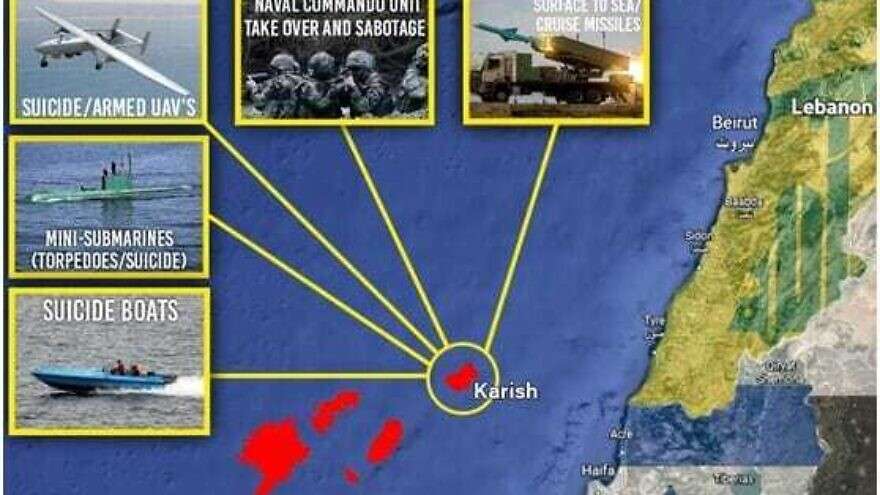 IDF Maj. (res.) Tal Beeri, head of the research department at the Alma Center, told JNS that Hezbollah had launched the UAVs “to send a message following the combative speech made by Hezbollah chief Hassan Nasrallah on June 9.”

During that speech, Nasrallah said that solving the maritime border issue is as important as the “liberation” of southern Lebanon from Israel in 2000.

Launching the UAVs “is Hezbollah’s way of getting out of the corner that Nasrallah painted himself into during his speech. This is how to satisfy the Shi’ite ‘base,” said Beeri, adding that “Hezbollah works only according to its interest.”

On June 13, Reuters reported that Lebanon was preparing to offer a compromise deal to Israel via US energy envoy Amos Hochstein to resolve the dispute. Hochstein landed in Beirut last month at the invitation of the Lebanese government.

Previous talks mediated by the US failed to reach a resolution, after Lebanon “pushed its claim in the disputed zone from a boundary known as “Line 23” further south to “Line 29,” adding around 1,400 square km (540 square miles) to its claim, including part of Karish,” said the report.

Hochstein instead proposed a “field-swap that would create an S-shaped boundary instead of a straight line.” However, Lebanon has not agreed to the proposal, according to reports.

It remains unclear whether Saturday’s incident will impact Israel’s willingness to conduct further negotiations with Lebanon at this stage.

To protect its offshore rigs, the IDF has equipped its navy with multiple defense systems.

In addition to the Sa’ar 5 ships, the Sa’ar 6-class missile corvettes have been recently added to Israel’s arsenal. They are equipped with the Israel Aerospace Industries-made Barak missile system and the Rafael-made C-Dome (naval Iron Dome) system.

The Israeli Navy recently completed a multi-layered combat exercise near one of its offshore gas platforms.

Much of Hezbollah’s know-how with regard to building and operating UAVs is believed to originate in Iran, which has also proliferated the technology to its terror proxies in Iraq, Syria and Yemen. Iran’s Islamic Revolutionary Guards Corps has also used UAVs in direct attacks. In July, 2021, Iran launched UAVs at the commercial vessel Mercer Street, off the coast of Oman, killing two crew members. The ship was managed by the London-based company Zodiac Maritime, which is owned by Israeli shipping magnate Eyal Ofer.

Back in February 2018, an IAF Apache helicopter successfully intercepted an Iranian UAV that was launched from Syria and had infiltrated Israeli airspace.

Several Sunni Arab countries share Israel’s view of Iranian-made UAVs as a significant threat to their security. In recent years, Iranian-backed Houthi terrorists have launched UAVs at targets in Saudi Arabia and the United Arab Emirates.