(JNS) In recent days, Hezbollah has stepped up threats to attack Israel’s offshore gas-drilling activities in the Karish gas field, off the coast of Haifa, due to an unresolved maritime border dispute between Israel and Lebanon.

Israel maintains that Karish is in its exclusive economic zone in the Mediterranean Sea, while Lebanon claims that the field is located in disputed waters. Israel has repeatedly called for United States-mediated negotiations to resolve the border issue. Talks began in 2020 but ended in 2021 after Lebanon refused to compromise its claim that its part of the border includes 1,400 square kilometers (540 square miles) of additional sea territory, which includes the Karish field.

On June 6, Hezbollah warned that it was ready to take military action against Israeli gas-production operations after the Greek-British Energean company sent a gas production ship to the area ahead of expected extraction work.

“When the Lebanese state says that the Israelis are assaulting our waters and our oil, then we are ready to do our part in terms of pressure, deterrence and use of appropriate means, including force,” said Hezbollah deputy secretary-general Sheikh Naim Qassem.

“The issue requires a decisive decision from the Lebanese state,” he added, saying that Hezbollah “urged the government to hurry up to set a deadline for itself.”

Qassem said the Iran-backed group would act “no matter the response,” even if it led to a broader conflict, according to the report.

Nasrallah said Israel should wait for the results of the negotiations and that any drilling that takes place before an agreement will be considered a direct assault on Lebanon, according to the Associated Press.

“All options are on the table,” he warned. 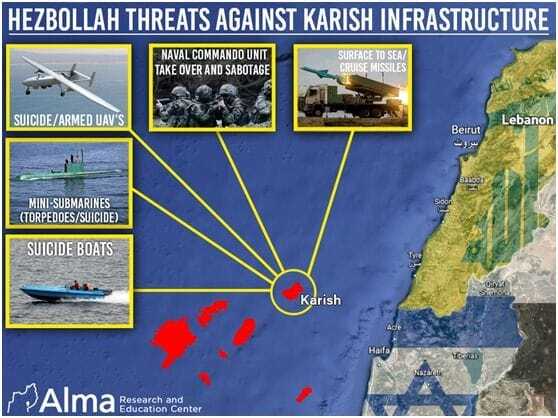 ‘Question of motivation is more complex’

Yet on June 14, Lebanese officials told Reuters that Beirut is “preparing to offer a compromise to US energy envoy Amos Hochstein” to resolve the dispute.

Hochstein landed in Beirut on June 13 at the invitation of the Lebanese government, marking new attempts to reach a diplomatic solution.

Professor Boaz Ganor, founder and executive director of the International Institute for Counter-Terrorism in Herzliya, told JNS that two key variables need to be examined to ascertain the severity of Hezbollah’s threats: capability and intentions.

“Does Hezbollah have the ability to implement its threat and could the organization have the motivation and determination to hit the rig? The answer to the first question is apparently affirmative. Hezbollah has the proven ability to fire advanced shore-to-sea missiles to strike the rig. But the question of motivation is more complex,” said Ganor.

“I assess that Hezbollah understands that any strike on the Karish gas rig will lead to no less than war, including between Israel and Hezbollah, and the state that grants Hezbollah cover. Israel cannot contain such an attack and would extract a heavy price from Hezbollah. Hezbollah, in turn, cannot contain the Israeli reaction, and from here, the distance to full war is short,” he stated.

Such a war would cause Israel substantial damage, but it would be “catastrophic for Lebanon,” said Ganor. “It will also neutralize Hezbollah’s military arsenal that was built by Iran as a strategic deterrent against Israel. This is a price Iran would be unwilling to pay. Hence, I assess that Hezbollah will be very careful to avoid rolling a snowball down the mountain that it can very quickly lose control of.”

According to a report by Walla, the Israel Defense Forces in recent days have sounded the alert on the risk of Hezbollah “protesting” Israel’s decision to begin drilling for gas in the region, but cited military sources as assessing that “Hezbollah won’t go far at the start. We are ready for provocations.”

The sources said they are preparing for various scenarios—from incidents of small arms fire in the air, an approach by a threatening vessel, to attempts to sabotage the drilling. The IDF is gathering precise intelligence and increasing its unmanned aerial vehicle patrols, as well as continuous patrols to provide early alerts and thwart threats in time, said the report. 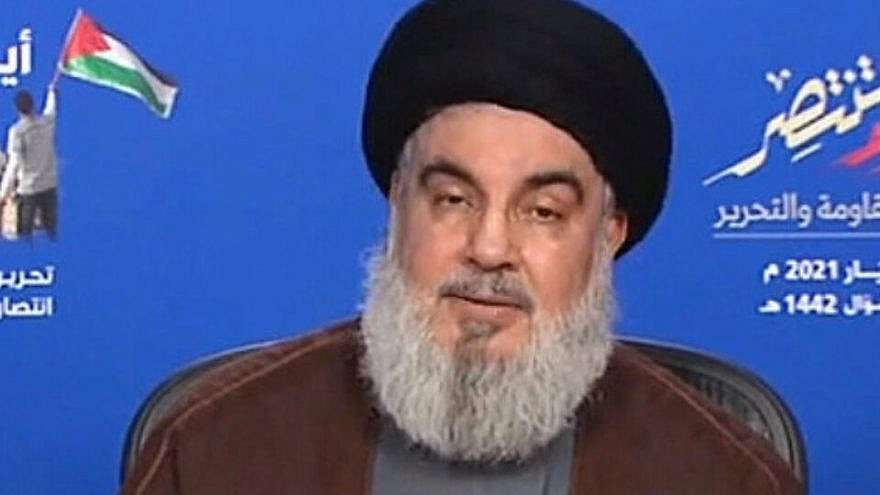 Hezbollah leader Hassan Nasrallah during a televised address marking the 21st anniversary of Israel’s withdrawal from Southern Lebanon on May 25, 2021. Source: Screenshot.

‘The economic benefit of the gas’

Maj. (res.) Tal Beeri, head of the research department at the Alma Center, a defense research center in northern Israel, said that in theory that Hezbollah has no interest in escalating the military situation with Israel at this time.

“What is holding it back? Its involvement in the Lebanese political-government system, especially during this sensitive post-elections period. Hezbollah is trying to shape next government and wants this government to be something it can ‘bless,’” said Beeri.

The Iranian-backed terror organization also does not want to be perceived as the entity that pushed away lucrative gas resources from Lebanon’s reach, he added, further harming Lebanon’s battered economy.

“As a result, Hezbollah is constantly emphasizing that it is subordinate to Lebanese government decisions on this matter. It recognized the economic benefit of the gas, and more importantly, it is interested in how this gas can help Hezbollah’s state within a state inside Lebanon,” noted Beeri.

On the other hand, Hezbollah markets itself as the defender of Lebanon, and it recently took a decision to portray the maritime dispute as being on the same level as Hezbollah’s war to push Israel out of Southern Lebanon throughout the 1980s and 1990s, he cautioned.

“On June 9, Nasrallah gave a speech that is relatively combative and not part of a trend of moderation,” said Beeri. “Raising the maritime dispute to the level of ‘liberating’ Southern Lebanon from Israel is very powerful messaging.”

“The big question is: Did Nasrallah paint himself into a corner with this rhetoric? Or is he only doing this for internal consumption? In all likelihood, Nasrallah expects that there will be a negotiated arrangement to this issue. Lebanon won’t get all it wants, but at least it will earn some revenue, and he will be able to say that ‘only because I threatened Israel and defended Lebanon was Beirut able to reach these objectives,’” he concluded.