Editor’s note: Before Erdogan’s Islamist AKP party came into power in 2003 Turkey was one of Israel’s closer allies and trading partners, even though it is a Muslim country. Turkish vacation resorts were flooded with Israelis. The two armies cooperated. Since Erdogan’s rise to power the friendship between the two nations deteriorated into outright antagonism and even warlike rhetoric. Could that be about to change?

Surprise call: Turkish President Recep Tayyip Erdogan, who never misses an opportunity to attack and defame the State of Israel, unexpectedly called President Isaac Herzog and congratulated him on his inauguration. The conversation comes after a long break with Israeli leaders. Erdogan did maintain occasional contact with former President Reuven Rivlin. However, there was a complete break between him and Netanyahu. The conversation lasted 40 minutes and was reported to be a very positive one.

The Israeli President emphasized in the conversation that “Israel-Turkey relations are of great importance for security and stability in the Middle East and there is a high potential for cooperation between the two countries in many areas, especially in energy, tourism and technology… The presidents attach great importance to the continuation of contacts and continuous dialogue despite all the disagreements, in order to promote positive steps to resolve the Israeli-Palestinian conflict, which will also contribute to the improvement of Israeli-Turkish relations.”

The Turkish news agency Anadolu reported that the two presidents discussed the high potential of cooperation between the countries in the fields of energy, tourism and technology. Erdogan told Herzog that the international community expects a permanent and comprehensive two-state solution to the Palestinian-Israeli conflict, as part of UN resolutions. Erdogan said that positive steps to settle the Palestinian-Israeli conflict would also contribute to an upturn in Turkish-Israeli relations. Erdogan congratulated President Herzog on his election as president and said, “The relations between Turkey and Israel are important for security and stability in the Middle East.”

“It will not be possible to achieve lasting peace and stability in the region as long as Israel’s policy continues. Turkey will not remain silent in the face of Israeli oppression of the Palestinians.” 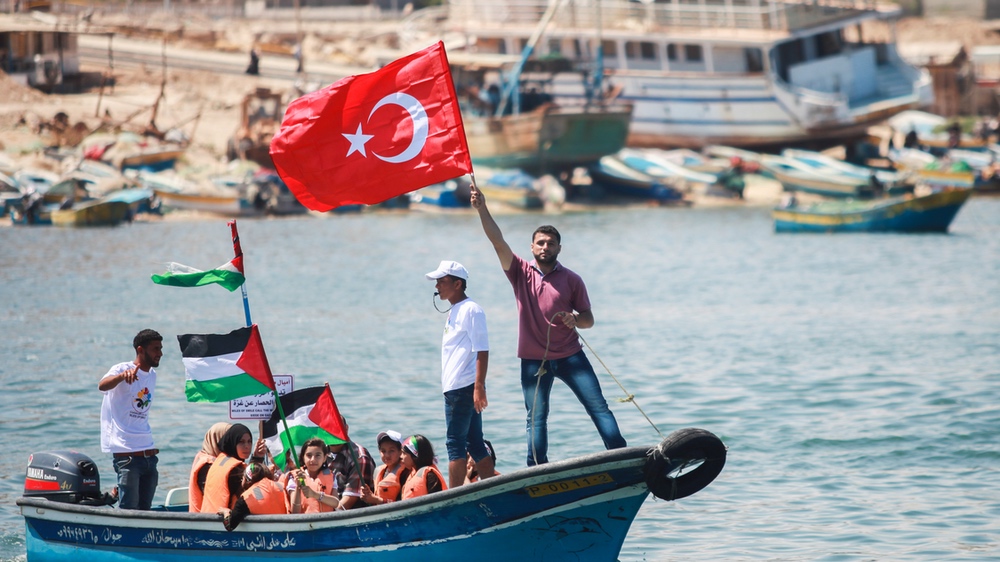 Israel and Turkey were fast friends and allies before Erdogan came to power and realigned his nation with the “axis of resistance.”

Then came a request from the Turks that Erdogan would like to talk to Herzog and congratulate him. Herzog updated Israeli Prime Minister Naftali Bennett, as well as Foreign Minister Yair Lapid and Defense Minister Benny Gantz; and consulted with them concerning issues that should be broached in the conversation. This indicates that the conversation also included security issues that are important to Israel, such as the concern about the Hamas presence in Turkey (even though this subject was not mentioned in the official statement from the Israeli president). Herzog also updated all three Israeli leaders after the call.

One assessment in Israel holds that the conversation was related to both pressure from US President Joe Biden and the cold shoulder the Turks receive from Europe. “This is not the first time they have been making overtures with us. We should hope that we don’t fall into the trap,” an unnamed Israeli political source said. According to a source involved in Israeli-Turkish relations, the surprising call from Erdogan to Herzog is nothing more than a Turkish tactic designed to dismantle the Israeli alliance with Greece and weaken Israel’s regional standing. The Turks are also afraid of the warming of Israeli relations with Egypt. This is a tactic and nothing more. Unfortunately, according to this source, as long as Erdogan is in power, nothing will change.

The last conversation between Erdogan and Rivlin was in 2017 following the tensions on the Temple Mount. Rivlin insisted on holding the call, despite Netanyahu opposing it. In 2019 Erdogan sent a letter of condolence to Rivlin following the death of his wife Nehama Rivlin.

The positive phone call to Herzog did not surprise senior Jerusalem officials. Turkey has long signaled to Israel that it is interested in thawing ties with Jerusalem. In Israel, however, these signals are treated with suspicion after being burned by Erdogan in the past, for example after the reconciliation agreement regarding the Marmara incident.

On the other hand, Israel accuses the Turks of allowing Hamas to operate in Turkey, although according to various publications, the Turks have hardened their treatment of the Hamas members in Turkey – refusing their requests for visas, and even summoning them for interrogations at the airport upon arriving or departing the country (to monitor their movements).

It is also reported that Hamas is recruiting Palestinian students in Istanbul to send them to the West Bank to carry out terrorist acts.

A few months ago, the Foreign Ministry appointed Irit Lillian, a former Israeli ambassador, to be responsible for diplomacy in Ankara. Lillian is a senior diplomat and an expert on Turkey. She also served as Director of the Turkey Department at the Ministry of Foreign Affairs. In her appointment, there is a message of desire on the part of Israel to increase diplomatic contacts with Turkey in an attempt to examine whether it is possible to open a new page in relations.

The Turks even signaled to Israel that they were ready to return the Turkish ambassador to Israel. According to Israeli assessments, the Turks are under pressure from the Biden administration and understand that they must normalize their ties with Israel. Moreover, due to the acute economic crisis in Turkey, Erdogan is interested in thawing ties with Israel.