Israel’s Shin Bet (General Security Service, the local equivalent to the FBI), the IDF and the Israel Police have in recent weeks uncovered
an extensive Hamas terrorist network led by senior Hamas figures living abroad. The network was operating throughout Judea and Samaria, with the aim of carrying out attacks in several areas of the biblical heartland and in Jerusalem.

More than 50 Hamas operatives have been arrested as part of the operation, and a large quantity of money, weapons and material for making explosives was seized. 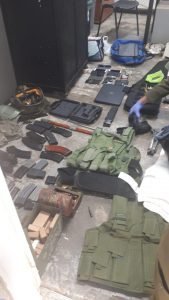 The network was funded and managed by senior Hamas figures, and led locally by Saleh al-Arouri and Zacharia Najib, a terrorist who was jailed for the abduction of an IDF soldier and later released as part of the deal for Gilad Shalit.

Recruitment and establishment of infrastructure in Judea and Samaria

Palestinian “activists” from across the so-called “West Bank” were successfully recruited, including Hijazi Qawasmeh, a 37-year-old Hamas operative from Hebron who has been arrested several times in the past for planning terrorist attacks. Qawasmeh comes from a family of prominent Hamas operatives who remain active in the terror group’s activities across the region.

Promise to finance a kidnapping attack

Qawasmeh reportedly met with senior Hamas officials abroad, who instructed him to begin carrying out attacks. Arouri is said to have offered the local cell $1 million to carry out a kidnapping attack against Israelis. He was later given hundreds of thousands of dollars to put the plan in motion.

Other recruited operatives, including Ahmad Zahran, were provided funds to begin obtaining weapons and to manufacture explosive devices. Zahran was shot dead by Israeli soldiers during a raid on the local Hamas infrastructure on September 26.

Discovery and seizure of materials for assembling explosive devices 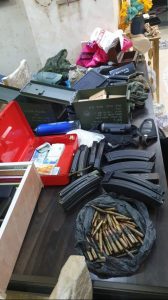 Investigations by Shin Bet operatives led to field operations in which many weapons were seized from the Hamas network. Among other things, an amount of explosives suitable for the construction of 3-4 suicide bomber explosive belts was seized.

A senior Shin Bet source said of the Israeli operation: “This is an extensive and significant preemptive action against a dangerous terrorist infrastructure that planned a series of devastating attacks.”

Israeli security officials vowed that they will continue to spare no effort to identify and thwart all efforts by Hamas and any other terrorist organization to set up base, recruit and perpetrate terrorist attacks in Judea and Samaria.