The dizzying rise in falafel’s global popularity is likely related to the growing vegan trend. Falafel is known and recognized as an iconic and popular dish in street kitchens around the world (along with its twin dip hummus). The Middle Eastern recipe is rich in fiber, protein and antioxidants, all of which make it the ultimate vegetarian dish. The global number of Google searches for falafel reaches 1.5 million every month, of which searches in the United States, Germany and France occupy the largest volume. The number of Google searches for “falafel in the area” increased by 80% on a global scale in the last year.

These facts led the experts of the Israeli culinary site 10bis.co.il and its sister companies around the world to investigate which city offers the best falafel. For this purpose, they analyzed food ratings and the number of restaurants around the world that specialize in the famous dish. In this way they discovered and crowned the city that offers the best falafel in the world.

The iconic Israeli street food is taking the world by storm.

Summary of the surprising results: 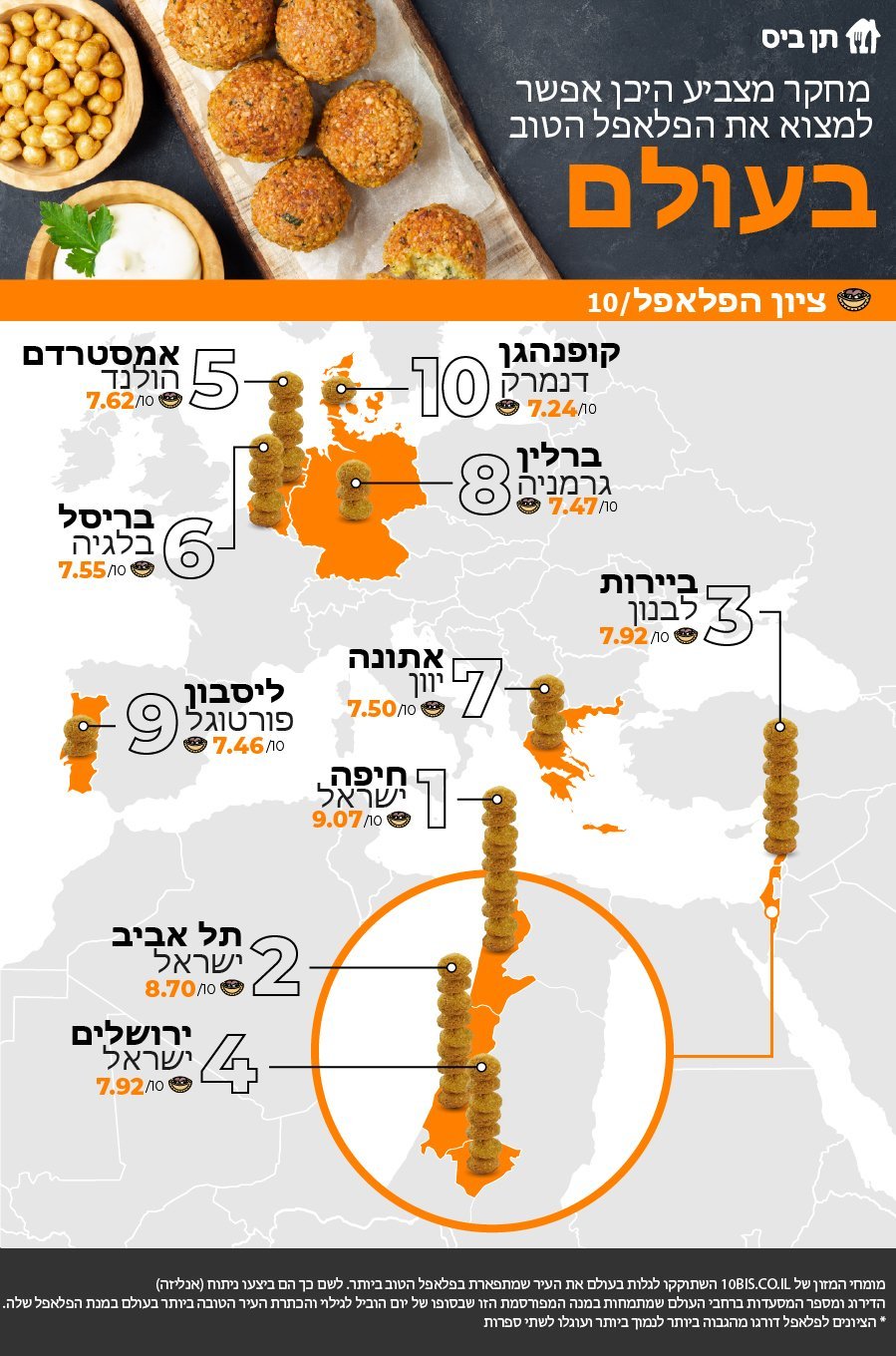 The results are in. No one beats Israel when it comes to falafel! Courtesy 10bis.co.il

The survey reveals that Haifa received the highest score with 9.07 out of 10, and thus won the title of the city that offers the best falafel in the world. Although only 4% of the restaurants in the city offer a falafel dish, Haifa offers the most delicious falafel among all the places tested (a score of 4.67 out of 5).

In second place is Tel Aviv, which received a score of 8.7 out of 10. It is interesting to note that Tel Aviv has 13 falafel restaurants for every hundred thousand residents – more than in Haifa, which won first place and offered 9 restaurants per hundred thousand.

In third place is another Middle Eastern city, Haifa’s nearby northern neighbor Beirut, Lebanon with a rating of 7.92 out of 10. The falafels offered by the Lebanese capital are in third place among all the capitals of the world and are rated 4.54 out of 5.

Immediately after Beirut, Jerusalem is in fourth place with a score of 7.92 out of 10. Over 9% of the restaurants in Jerusalem specialize in falafel and place it higher than sister cities in Israel – Haifa (3.95%) and Tel Aviv (2.56%) – in terms of percentage specializing. 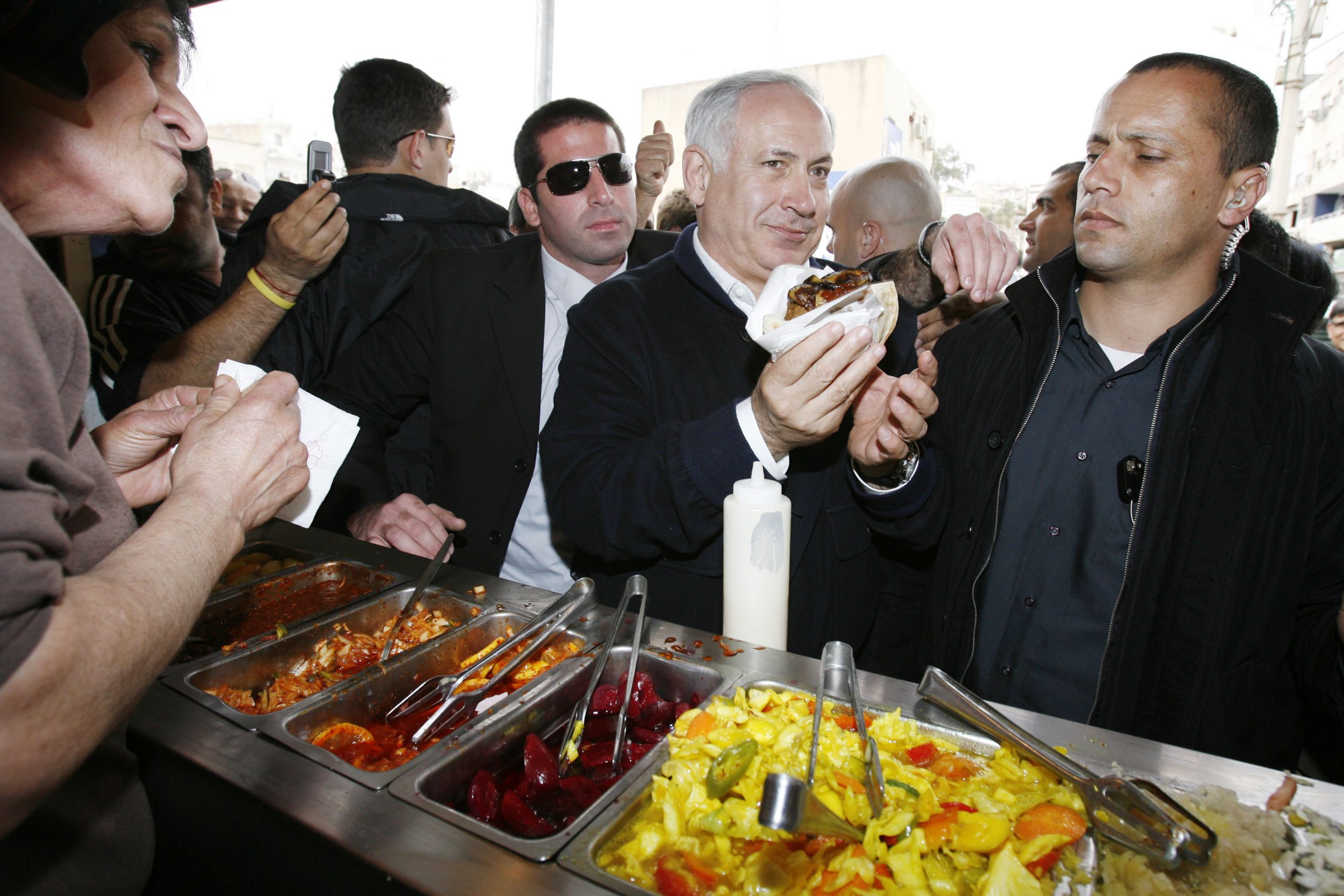 From Israel’s national leaders down to the average man on the street, everyone loves falafel.

In fifth place in the overall ranking is Amsterdam, the European city with the highest rating with 7.62 out of 10. The Dutch city offers 12 falafel restaurants per 100,000 inhabitants, much less than cities such as Brussels, which offers an impressive density of 33 out of 100k restaurants (more than any other place tested). The Belgian capital was ranked sixth in the study and received an overall score of 7.55 out of 10.

In seventh place is Athens (7.51 out of 10). The Greek capital offers the most delicious falafel in Europe, which received a score of 4.60 out of 5, a score that falls short of that of Haifa, which won first place.

Berlin is ranked eighth with a score of 7.48 out of 10. In a city known as one of the most vegan-friendly cities in the world, 2.61% of restaurants in the German capital offer high-rated falafel (4.37 out of 5). Lisbon has a higher rating than Berlin in the most delicious falafel scale (4.42 out of 5). The city won ninth place in the overall ranking – 7.47 out of 10.

Copenhagen closes the top ten (7.24 out of 10). The Danish capital enjoys 43% more falafel restaurants compared to Haifa, even though it received a 20% lower rating in the overall result.

Why not find a falafel restaurant near you and tell us how it was?

Check out our Israeli food products