My life in Moldova began a number of years ago when I went to school to become a dentist here at the Nicolae Testemitanu School for dentistry. I spent five years here, learning dentistry, learning the language, connecting with people and students who later become my colleagues. I never dreamed that I would come back here to provide relief efforts to a war zone in Ukraine. But here I am, treating thousands of Ukrainian refugees who are streaming across the border into Moldova every day. Some I am helping by providing them with humanitarian aid, while others I am helping treat for medical ailments or injuries together with my fellow United Hatzalah volunteers. There are also quite a few who I have helped as a dentist and provided emergency dental treatment and then referred them to my former fellow students who now have their own practices right here in Moldova.

I never thought that I would be putting my student connection to use in this way, but when a war breaks out and people need help, we do whatever is in our power to help them. That is how I grew up and that is how I live my life, especially when it comes to being an emergency medical first responder.

Over the past week and a bit that I have been in Moldova, both at the border and in the capital city of Chisinau, I have helped hundreds of people in different ways, in addition to what I mentioned already. As one of the Russian/Ukrainian-speaking team members, I was put in charge of assisting refugees in Chisinau who are located at various hotels and community centers. We spent three days last week going to all of the hotels, community centers, and other refugee centers and alerted the refugees that we are here and able to provide them with relief and free medical checkups and care. In the hotels, the staff assists us and we call each and every room and tell the refugees staying there that we are here if they need us and that they can contact us. They usually come down to the lobby to meet us and share their stories. We often end up crying on one another’s shoulders for a while after this. They cry for what they have lost, as do we, but they also cry for another reason, that after all they have been through, someone is here to help them. 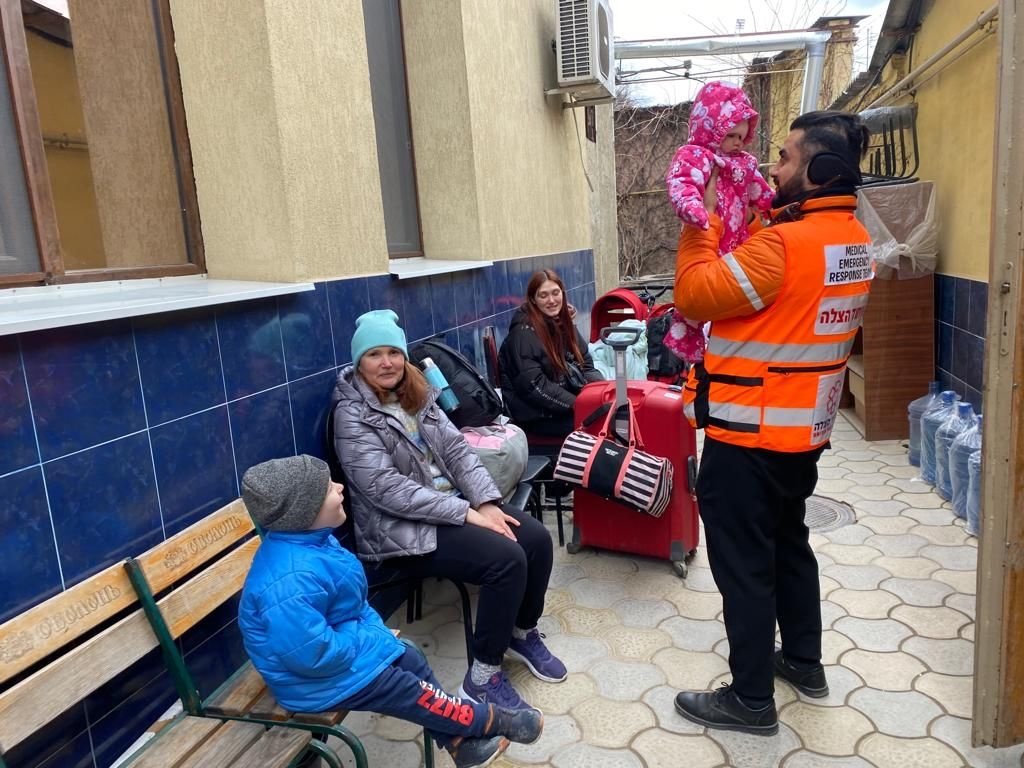 Early on in the mission, someone came up with the idea that we should empower the refugees to look after themselves, so we began teaching basic CPR and first aid courses to the refugees in various hotels and centers. Anyone who was interested was able to attend and learn how to provide care for themselves, their families, and one another. For me, this was very moving as I got to see firsthand just how much this meant to them. It gave them back a small sense of control of their lives when so much had already been taken from them.

One of the days I went to the border crossing last week I met with a family who saw our vests and flags and came up to us seeking help. The mother, with two small children, began speaking to me in broken English, trying to convey what she wanted me to check in her young son. When I responded to her in the Russian language, she gave me a surprised look and started crying. She immediately hugged me and then told me what was wrong with her son. He was shivering and she said he couldn’t stop shivering for a long time. I took him inside a tent, gave him a blanket and a toy and something warm to eat. After a while, he calmed down and his shivering dissipated. The woman thanked me profusely and told me how they had traveled in a car with no heat for two days, avoiding bombed-out roads in order to get to the border. She told me that she has no idea when or if she and her children will ever see their home or their father again and she thanked me for speaking to her in her native tongue so that it brought her a little more comfort. That is when I began to cry. 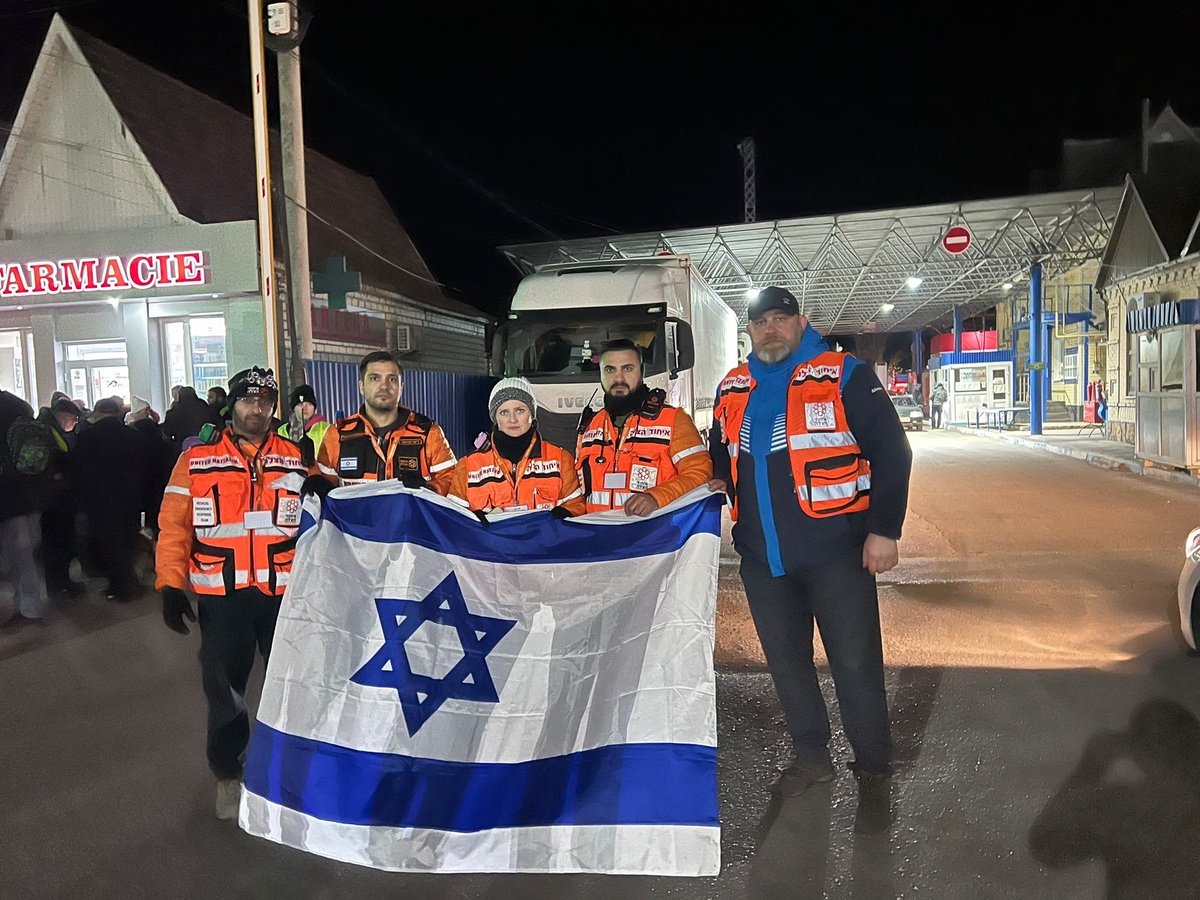 A lot of people we manage to help, at least a little bit. To some we provide food or shelter, for others, we provide medical care and a quick evacuation to Chisinau to our field hospital or connect them with the local community for assistance. But there are those who it is very difficult to reach and to provide help on an emotional level. A lot of people need that type of help, connecting and bringing them back from their state of shock and loss. One such boy was sitting down on the Moldovan side of the border crossing. We were handing out plastic balls and trying to create a bit of a soccer game among some of the refugee children to give them a sense of play and take their minds off of their journey and what they left behind. This boy wasn’t interested in the ball, or in any type of game, he just sat by the wall of the building looking dumbstruck. One of our Psycho-trauma and Crisis Response team members went up to him and sat with him for a while. Not even talking, just being with him. It took almost half-an-hour of sitting in silence next to each other, but the boy finally began to cry, and without saying a word, we knew that we had gotten through to him and helped him begin to process the incredible amount of grief that he was feeling and couldn’t express. I cried then too. I cried three times that day.

Each day when I go to sleep, for the few hours that I sleep, I wonder how will the world cope with providing relief for this many people? I don’t know the answer, but I am happy that I am here providing whatever relief I can for the people I can every day. I left my wife, Noa, at home in Israel so that I could be here and help these people. Noa is pregnant with our first child. When our child grows up, I will tell them the story of how I cried three times in one day on a border in a faraway place while I was helping people who were suffering due to war. I hope and pray that my child will never have to go through anything like this. No child should.

From a press release by the Israeli medical emergency response organization United Hatzalah.