Far-right Member of Knesset (MK) Itamar Ben Gvir on Tuesday demanded that he be allowed to check in on a hunger-striking Hamas terrorist being treated at an Israeli hospital. But he was physically prevented from doing so by MK Ayman Odeh, head of the Joint Arab List.

Just prior to the physical altercation, Ben Gvir and Odeh exchanged angry words outside the hospital room of Miqdad Qawasmeh. A known Hamas member from Hebron, Qawasmeh has been on a hunger strike for nearly three months now in response to his lengthy administrative detention. 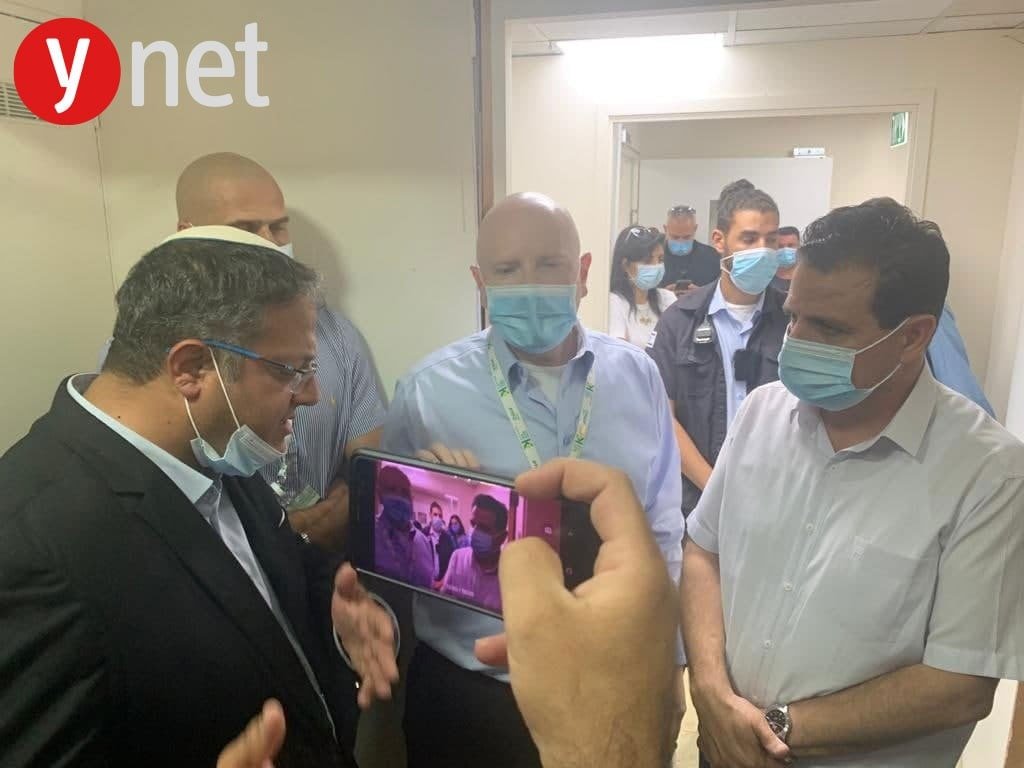 Calm before the storm. Ben Gvir (left) and Odeh (with hands folded) expressing themselves with words. Soon enough, it would come to blows.

Israeli authorities use administrative detention to hold security prisoners indefinitely without trial when the details of their crimes are classified for one reason or another, for instance due to an ongoing investigation or counter-terror operation.

Qawasmeh was in the headlines earlier this month when two Israeli Arab nurses at Kaplan Medical Center where he is being treated posted selfies of them embracing and shaking hands with the prisoner. The two were not fired over the incident.

MK Odeh was presumably at the hospital on Tuesday to score political points among Arab voters by encouraging Qawasmeh. Ben Gvir seems to have arrived to likewise boost his numbers among right-wing voters by insisting that the Hamas prisoner receive no special treatment.

“I came here after witnessing a train of Knesset members from the Joint Arab List and Ra’am show up to offer encouragement to a Hamas supporter,” Ben Gvir told the religious news outlet Kippa before entering the hospital. “I came here to check on the prisoner’s conditions and to make sure they are remaining wary of him and not treating him like a celebrity.”

Ben Gvir added cynically that he just had to witness the “miracle” of a man who has reportedly not had a bite of food for 90 days and yet still lives.

Odeh and his entourage were already in the room when Ben Gvir arrived. A senior hospital official was seen explaining that the room was already overcrowded. But Ben Gvir insisted that he as a Member of Knesset had as much right to check in on the prisoner as Odeh.

The two engaged in a brief shouting match before Odeh physically blocked the door and shoved Ben Gvir.

Ben Gvir later said that he intended to file an official police complaint against his Arab colleague. 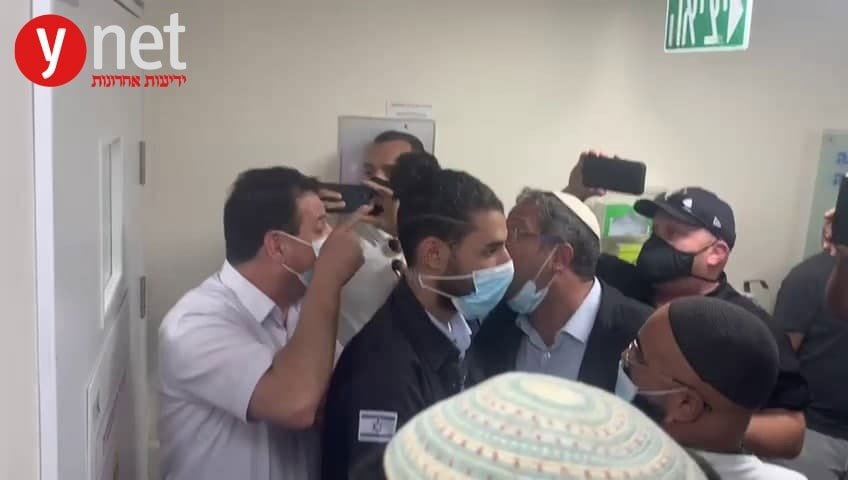 “Ayman Odeh committed a serious criminal act,” Ben Gvir told Ma’ariv. “We all saw the dramatic images of Odeh attacking me. This demonstrates well the attitude of lawmakers from the Joint Arab List and Ra’am. They feel like they own the place.”

Ben Gvir did apparently make it into the room some time later, and stated: “I asked the hospital director to check on the conditions of the prisoner, and finally, in spite of Odeh’s behavior, I entered the room and was left with the impression that the State of Israel has become a paradise for terrorists.”

For his part, Odeh tweeted that he had prevented a “terrorist” (Ben Gvir) from entering the room and “harming” Qawasmeh.