For any of you who have not yet visited Israel, we are sorry to erode your impression of the Holy Land and its residents, but there is a big litter problem throughout the country. For example, places where people eat picnics tend to fill up with trash, including nature spots. The shores of the Sea of Galilee have been some of the “worst offenders” … up until recently that is.

One bright-eyed new immigrant named Jordan decided to do something about the litter in Israel and started an ongoing cleanup project called the Beautiful Land Initiative (BLI – based on Ezekiel 20:5-7). He does it mostly with the help of Christian tourists from the nations. Seeing them clean amazes and even shocks local Israeli bystanders. I recently met up with Jordan in the parking lot of a Tiberias supermarket, after I had volunteered in the past on a few of his cleanup projects, to get an exclusive Israel Today interview.

Israel Today: Why did you start BLI?

BLI Founder Jordan: One day on a visit to Israel, I was hiking in a forest on Mount Carmel when I came to a clearing in the woods completely filled with litter dense on the ground. In shock, I said a short prayer: “God if I ever come back here, I want to clean up Your land.” It was like a vow.

Many years later, I immigrated to Israel in 2014 with a wife and a baby on the way. After 10 months here, I was pondering my “path” one day and happened to read Psalm 37.

…dwell in the land and enjoy safe pasture.
Take delight in the Lord,
and he will give you the desires of your heart. (Psalm 37:3-4 NIV)

As soon as I read the last phrase, it hit me that the desire of my heart, the thing I would like to be given, would be divine help to make this land beautiful. I told my wife: “I know why we are here – to clean up trash!”

The next day I met a guy and told him we were going to bring people from all around the world to clean up, to pick up litter and transform culture. He immediately said: “I’ll help. I bring 40 tour groups here every year.”

We started that week, on September 27, 2015. The first day we cleaned up 60 bags of trash. The beachgoers and locals were coming up, and one lady said: “I’ve been coming here every day for years and never seen this beach clean.”

She was weeping. It was then that I knew we had hit a heart chord.

One day early on in the project I found myself almost gagging as my hands picked up disgusting waste. A month later those same hands were shaking hands with the mayor of Tiberias who invited me to his office.

I replied: “Send your team to collect the bags after we fill them with trash. Help us help you.” 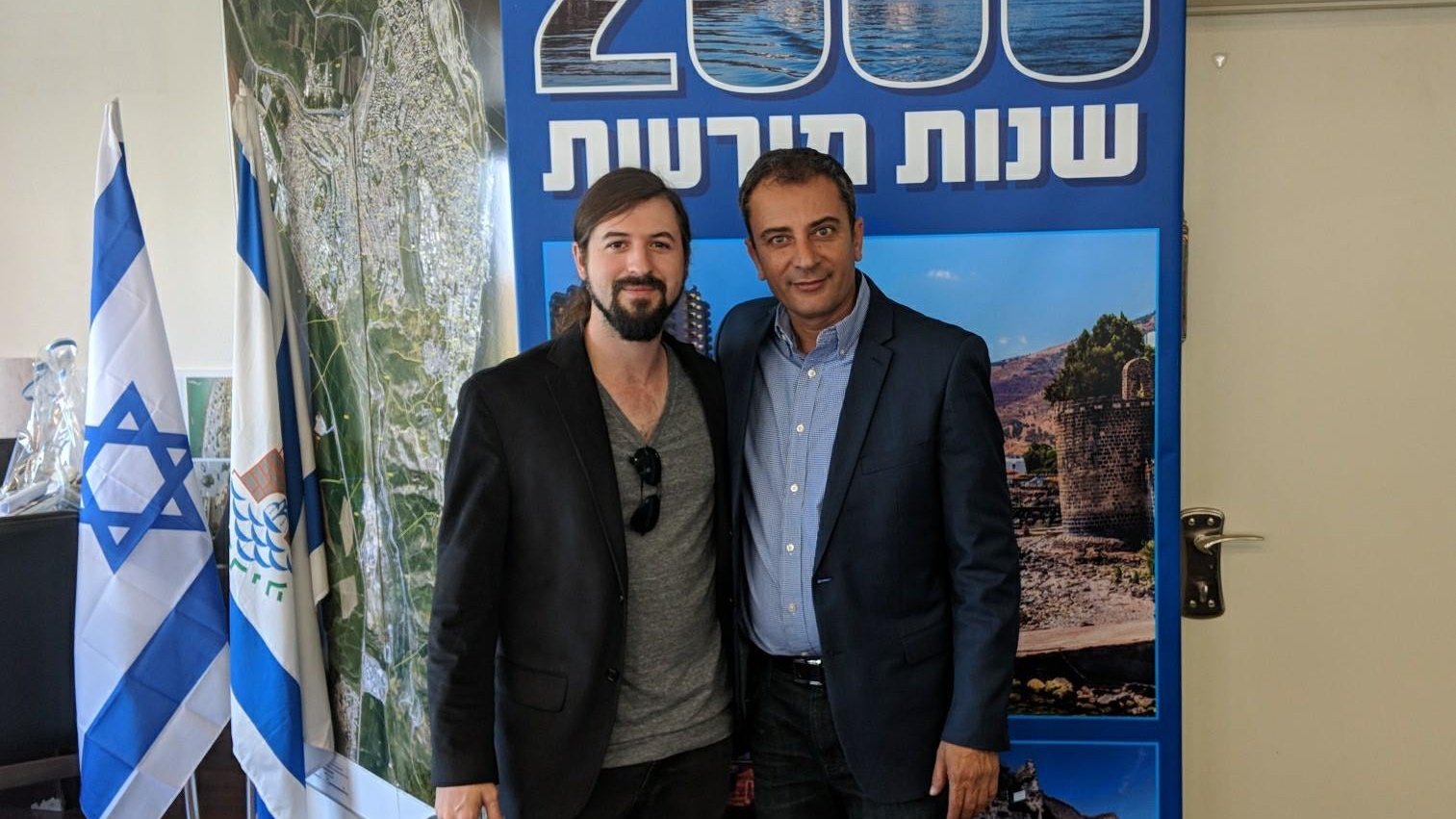 Beauty improves every aspect of life. Since we started we have seen a movement break out in many places, directly or indirectly influenced by BLI. I know of at least 10 parallel initiatives that have sprung up.

But the primary location is the Sea of Galilee – and Tiberias city. All over the city of Tiberias we have cleaned up neighborhoods, backyards, parking lots. One person was like, “Hey, what are you doing?” as we cleared out an old couch next to their apartment building.

We have had volunteers from 42 nations, 5,600 of them. We have removed 110 tons of litter from public spaces.

The largest demographic of clean-up man-power is Evangelical Christians, about 75% of the volunteer force. Locals ask me, “Who are these people? Where are they from? Why would they spend their vacation time picking up trash?” These Israelis see a God-given heart for Israel moving Christian tourists to be a part of cleaning and to even feel honored doing it. That sends shock waves through many people. Some Orthodox Jewish Israelis watched us cleaning and started shouting, “Mashiach achshav! Messiah now!” So I think it sort of resonates with the religious community as a sign of the times and as a sign of the soon arrival of the Messiah.

The other side of the volunteer force is local Israelis. We have worked with Orthodox Jewish groups and even ultra-Orthodox, including yeshiva [religious school] groups. We have had work crews of non-religious Israelis, Israeli soldiers, and public school groups from middle school and high school ages. I have done presentations at schools and led the kids on outings to clean up around their school. Our biggest group so far has been 330 people at one time. It was made up of 150 pastors and 180 students.

One day we had a Muslim Israeli-Arab join us on a clean-up. Our conversation surrounded the fact that this land is the home of all who live here, Jews and Arabs, and that the land needs to be taken care of by all who live here. So he joined a group of Christian Americans cleaning trash. It was amazing.

The efforts have been featured on Israeli television channels such as i24. After three years of cleanups, in 2018 the water level of the Sea of Galilee began to rise and has gone up 6 meters (18 feet) to fill the lake since then. This historic rainfall has been a great encouragement. It feels like we prepared the lower beach areas by cleaning them so that the water could be restored to a higher level. 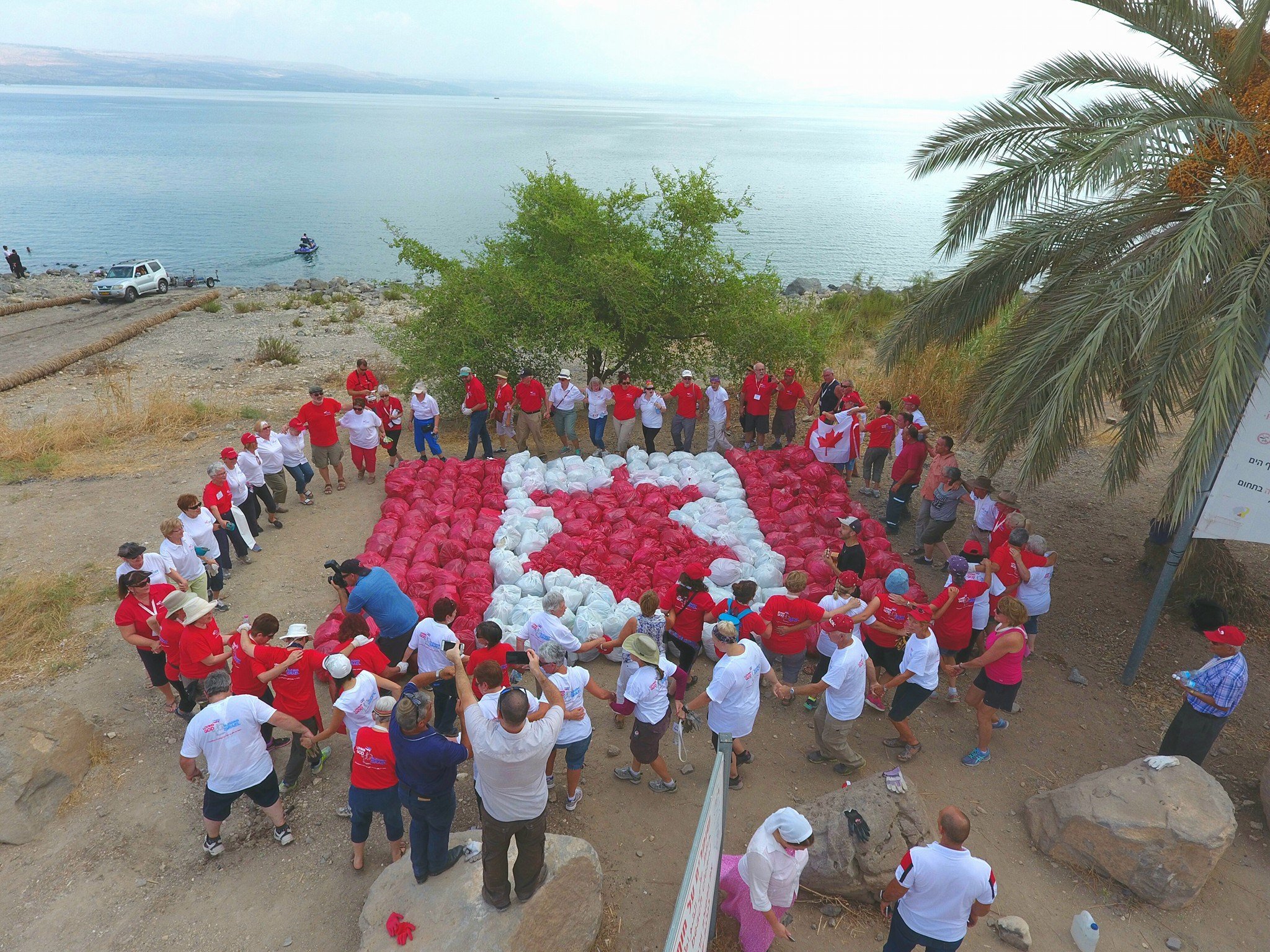 BLI volunteers from Canada arrange their trash bags in the shape of their national flag.

What is the BLI connection with the city of Tiberias?

When COVID hit, our volunteer efforts came to a screeching halt as all tourism from abroad suddenly stopped. A big part of 2020 was developing a project of new trash bins in Tiberias. This pilot project involves creating 300 high-quality, stainless-steel bins for the city of Tiberias. Each bin has a 15-year lifetime and will eventually capture 15 tons (~30,000 lbs) of trash. We are seen in the city as a real benefit. We have a great working relationship with the municipality. We are raising money to pay for the bins. And they are working with us too, to do all the ongoing trash removal from the bins and replace the bags. The city wants us to be successful.

Why is there a trash problem in Israel?

When there is a problem of a blind spot in any society attention is brought to it. Then it ceases to be a blind spot and becomes a point of pain. When something is painful it tends to get taken care of.

Why is there a blind spot in Israel?

We in Israel forgot who we are.

We forgot where we live.

We forgot what it cost to get here.

It comes from a sense of disregard. The answer is to remember who we are, where we live and what it cost to get here. The answer is realizing this land is an inheritance and our children’s future. I realized early on that my battle was not to confront people who were throwing litter on the ground with my words, but with action – to demonstrate a different approach.

We have brought thousands to clean up and made hundreds of videos featured all over media. Vision has spread. The way we know the vision works is that other people are doing similar things in parallel.

By the simple act of picking up litter you can eventually transform a culture. Right now seeing someone pick up trash turns heads [in surprise]. Later on, seeing someone throw trash on the ground will turn heads. Then we will know that transformation has taken place.