“Arab Israelis are in trouble, and the reason is that our democratically elected Arab leadership that was supposed to serve us are more interested in causing trouble for Israel than solving our problems,” Nael Zoabi, a Muslim school principal, told Israel Today in a candid interview.

The problem, he said, is that “the Arab leadership refuses to accept that we live in a Jewish state. Until we Arab Israelis acknowledge that we are citizens of a Jewish State and begin acting like people who care about the State of Israel, there will never be peace,” stressed the 50-year-old veteran educator, who has dedicated his life to teaching children the importance of embracing their place within Israel. 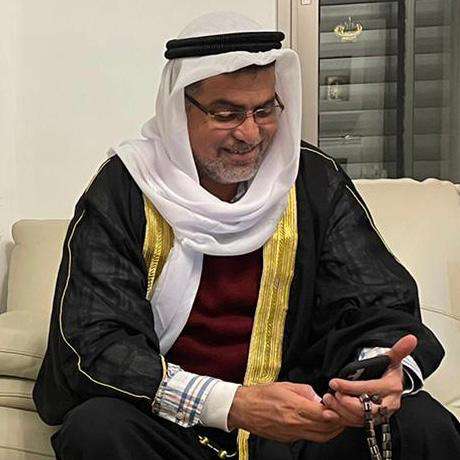 “I have no other country, and no other flag,” Zoabi repeated with passion throughout our talk. I do not want to be a citizen of another country, neither the Far East nor Europe, nor Muslim or Arab countries in the Middle East, nor under the Palestinian Authority. I understand that this is the national home of the Jewish people, and I want to be and should be a full citizen of the State of Israel, the legitimate homeland of the Jewish people,” he insisted. “Being a proud Arab and a proud Muslim does not contradict my being a proud Israeli.”

Zoabi became the first Muslim Israeli citizen to join Benjamin Netanyahu’s Likud list ahead of the 2021 election. “Nael Zoabi will lead our efforts for the benefit of the Arab citizens of Israel,” Netanyahu said at the time. Zoabi hopes that Netanyahu will win again in the upcoming election, and counts the former prime minister as one of his friends. “When Bibi visited our school in the Arab sector in the North, we welcomed him with 120 blue and white Israeli flags. That’s how we wanted to communicate that we are faithful citizens of the Jewish state. Israel is our country and what is good for Israel is good for us,” he told the prime minister.

See: The Wisdom, Or Not, of Banking on Bibi

I asked Zoabi if he is planning to run again with Netanyahu, and he said he still needs to think about it, but by the end of the interview he seemed decided in favor of running. 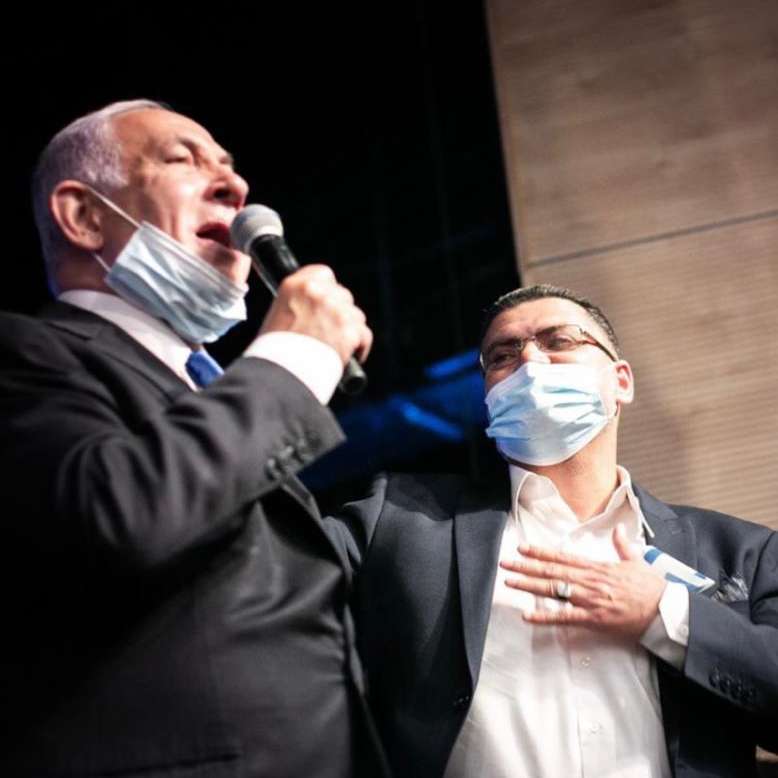 Zoabi and Netanyahu at a political rally ahead of last year’s election. Photo: Courtesy

Israel Today: Why are you so different from the majority of Muslims who hate Benjamin Netanyahu and hate the Israeli Right?

Zoabi: To achieve peace we must be straightforward. We Arabs must accept that we are citizens of Israel in the full sense of the word. Bibi’s achievements are well-known in helping the Arab population of this country. People talk about violence in the Arab sector, but before Bibi there was just a single Arab police station. Bibi opened nine Arab police stations around the country.

And look at the numbers of academic degrees among Israeli Arabs, which rose 100 percent during the premiership of Bibi. Our people are more educated than any Arabs in the Middle East. And how about the fact that Arab Israelis overcame the Corona pandemic before any of the other Arab countries in the region. The people love Bibi and he is good for the country.

Or consider the real peace that Bibi achieved with the Arab world in the Abraham Accords. Bibi and the Right achieved this. No one else.

So you believe that the Abraham Accords are a positive step toward peace in the Middle East?

“Yes, I do. I believe that when BIbi comes back to govern there will be peace with all the Arabs. And I will tell you something else. From telephone discussions I have with Arabs from around the region and messages that I received when I was a candidate for Knesset together with Netanyahu, Arabs are telling me to continue in your way and toward making peace with the Arab world. 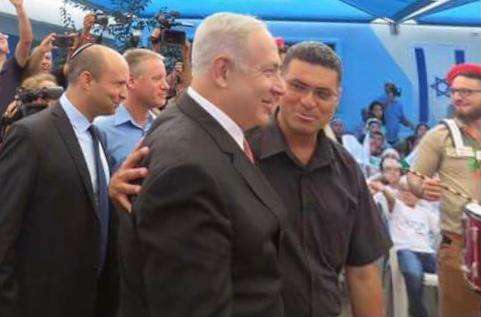 What do you make of the Bennett-Lapid government, which was the first in Israel to include an Arab party?

It’s a supermarket that has everything, but in the end nothing. There is no vision, no clear agenda. The entire enterprise is held together under one banner: “Just not Bibi.” What does this banality even mean? It is empty. Says nothing. They forced the idea that Netanyahu is no good for one reason alone. All the political leaders know that as long as Bibi is in the ring, other candidates have no chance to be elected. The people love Bibi. They voted for him every time.

Naftali Bennett had settlers, ring-wing and left-wing factions, and even Mansour Abbas’ Muslim Brotherhood party that does not believe in the existence of the Jewish state. Bennett and Yair Lapid sold their own values in order to get into the government, and the only way they could do that was keep saying “Just not Bibi.” How can you govern when decisions must be made by a collection of nationalist settlers and far-left Meretz lawmakers, some of whom describe the settlers as a disease?

In the past all these “Never Bibi” guys served with Bibi in the government. Now they only know how to speak negatively about him? What happened? And look what Bibi did. What are we lacking in this country? We have security, financial stability, technological advancements, military supremacy, quiet on the southern and northern borders, international relationships, and even with Arab countries. No other Israeli leader was capable of achieving all this. I recall the American Congress giving him a standing ovations 100 times in 2015.

If Netanyahu wins again in the upcoming election should he sit with Mansour Abbas or other Arab parties?

Never. He has never, should never, and never will. If Bibi chooses to sit with an Arab party he will first make sure that they believe in and support the Jewish state, and that they are loyal citizens of Israel. It will be an Arab Israeli that acknowledges the flag and the Jewish nation without doubt. If not, then you have allowed into the government tentacles of the Muslim Brotherhood. And Bibi has never and will not be in any coalition with these anti-Israel Arab parties. 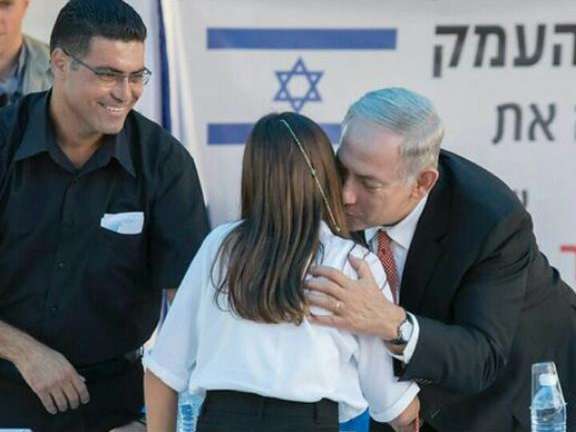 Is the Israeli-Palestinian conflict a political or spiritual/religious conflict?

The Bible and the Koran, our two holy books, have determined that the Land of Israel belongs to the Jewish people. And no one, not me or anyone else, can cancel that. It is important for me to speak about this everywhere. This means that this is a Jewish nation, a land for Judaism, and Arab Israelis must acknowledge this.

But what is happening today is a political conflict. Arab politicians do not want to acknowledge the truth that this is a Jewish State, and that the Arabs who live in Israel must welcome with open arms the Children of Israel into this land. They have never ever done this, and will not do this, because as soon as Arab politicians embrace the Jewish state as their own nation, they will cease to exist. Because their entire purpose in Israeli politics is to undermine the Jewish state. They constantly feed the Arab Israelis on the notion of struggle against the Jewish state.

Of course, the Jewish nation must fully embrace all of her Arab citizens.

How should Israel deal with the Arab Israelis who promote Palestinian identity and want a Palestinian state right here in Israel?

All the surveys show that this is a very small percent of the Arab Israeli population. Perhaps 5% that consider themselves “Palestinians.” This small group does not represent the Arab-Israeli sector at all. Those pushing the Palestinian agenda are actually the so-called “moderate” Arab parties in the government!

Will you run with Bibi this time around?

I don’t know. I am still considering. Either way I am still devoted to Mr. Netanyahu. Bibi and his party are the only politicians to which I have been committed.

Your views are not often heard in Israel. I hope you will run for Knesset.

A biography of Nael Zoabi titled Arabs for Israel (ערבי בשביל ישראל) is being sold in major bookstores in Israel. This is the first publication of an Arab Muslim citizen of Israel who speaks openly about his identity as an Israeli.