We are currently in the midst of a crucial operation to ensure the safety of millions of Israelis. It is not our first operation in Gaza, and I fear it won’t be the last. Every time Hamas decides to drag us into another round in this everlasting conflict, it sparks support from Palestinians in the West Bank and Arab villages and cities in Israel (not to mention the Muslim world). Even for many Israeli Arabs, Hamas’s cause is ultimately their cause. This time around, the fighting evoked violent protests unlike we’ve seen before all across the nation.

The ensuing violence made people rethink their outlook on Israeli society. Many woke up to the reality that the fabric of Jewish-Arab coexistence is much more fragile than they thought. Mixed towns suddenly exploded, hatred spilling into the streets. As police were struggling to disperse the angry mobs, Jews took it upon themselves to fight back, and to intercept the Arab riots. On occasion they filled in for the lack of security for the Jewish population, other times it has gone too far and Arab businesses were damaged and Arab bystanders were beaten.

Many believe, as do I, that the real threat in Operation Guardian of the Walls is the internal conflict, and not so much the Gaza rocket fire. I do not wish to belittle the lethal barrage that has destroyed homes and lives in the country, however, the Israel Air Force will deal with the shooters, Hamas will be weakened and a ceasefire will be reached. But while Gaza is somewhere “over there,” we have to wake up next to fellow Arab neighbors here in Israel. Many of them are doctors, grocery store owners, car dealers, construction workers, restaurant owners. We live side-by-side. Every day. What will our relationship look like when all this is over?

Countless Arabs said in interviews for multiple TV channels that this is the end of the partnership. The wheel can’t be turned back. It’s over. But is it? 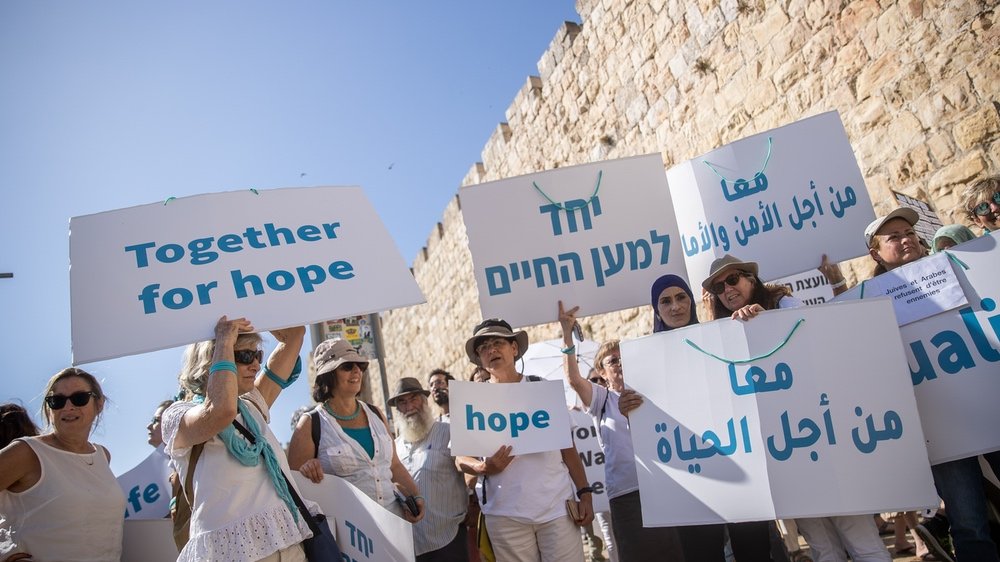 Jews and Arabs demonstrate for a return to peaceful coexistence.

While the media is busy covering the terrible goings on, joint Jewish-Arab endeavors for peace are pushed to the sidelines. For instance, the Haifa Municipality published photos of residents who work and live side-by-side, in Nof HaGalil they uploaded a picture of a mixed children’s soccer team and the Religious Leaders Forum spoke out strongly against violence and said emphatically: “Violence is not in my religion!” The chairman of Islamist political party Ra’am, Mansour Abbas, also issued a conciliatory message, saying: “We are ready to take part in the restoration of the damaged synagogues. I will lead this.” Not all is lost.

See: Mansour Abbas: Is He the Real Deal?

Demonstrations with the participation of hundreds of people took place in Habima Square in Tel Aviv, Clock Square in Jaffa and the Hadar neighborhood in Haifa. The demonstrations were led by the “Standing Together” movement, which promotes a Jewish-Arab partnership. Their slogan: “Jews and Arabs refuse to be enemies.”

The challenges are real, but also breed opportunities for genuine change. Just when a coalition agreement for change was right around the corner, the conflict broke out. Recently, Yamina party chairman Naftali Bennett, kingmaker of this round of elections, has backed away from a coalition deal with the “change bloc” that seeks to unseat Benjamin Netanyahu as prime minister. The rising tensions with Gaza and Arab communities in Israel have pushed the religious Zionist away from compromising with left-wing parties (not to mention Arab party support). A strong right-wing nationalist Jewish government, that’s what Israel needs during these tumultuous times. For this, Bennett needs Likud, he needs Benjamin Netanyahu.

See: Fighting for a Right-Wing Government

While this is true, it is also true that for the first time a representative of the Arab public (Mansour Abbas) has expressed the desire to negotiate. Not as a pretense, but truly negotiate for the sake of the Arab communities living in Israel. It is a golden opportunity not to be missed. Israel has a chance to facilitate much-needed change. It could help the Arab population feel like things are starting to work in their direction. Someone needs to address domestic abuse, illegal weaponry, gang violence and education. As long as the Jews treat the Arab sector as their dirty backyard, nothing will change. Hatred towards “the occupier” will always present itself.

The next government, whatever it ends up looking like, must address the rioters within our borders. The Ministry of Interior will have to take the bull by the horns after this is over and deal with incitement in schools and online and root it out. Cooperation with the Arab leaders is essential. Those individuals who dare to wave the flag of a terrorist organization must also have the courage to be associated it. Those who call for the death of Jews, the abolition of the state and incite others must be prosecuted with an iron fist. Firm policies must be implemented upon the formation of the coalition, it mustn’t go unaddressed, otherwise we’ll experience more of the same in 4-5 years’ time.

Conclusions must be drawn from this operation. Something needs to be done differently for the sake of the Israeli citizens, both Jew and Arab. The truth of the matter is the Jews aren’t going anywhere, this is our homeland, but the Arabs aren’t going away either. Therefore, we have to find ways to coexist, with mutual respect, all the while leading an uncompromising position against terror and violence. Let’s not lose this opportunity.

Read more on the topic of Coexistence: