In the modern history of Israel, never before has it faced such political chaos

Benjamin Netanyahu has exactly 28 days to form a government from the moment he received the mandate from President Reuven Rivlin, with a possible extension of 14 days. So he has to achieve the seemingly impossible by May 5th, or two weeks later at the latest. If he doesn’t succeed, the president has to choose someone else, and if he does not succeed in forming a government, Israel would face a fifth election.

Most commentators agree that Israel has never been caught up in such political chaos in its entire history. Neither the Right, Left nor Center have a real chance of forming a coalition without the participation of the Islamist party Ra’am. It’s a political scenario that is alien to Israel and feels like a lump in the throat.

See related: Would Ra’am Be the Right Choice?

Israel’s right-wing parties hold a majority in the Knesset. Seven parties, which together have 72 seats out of 120. In theory, they have a stable majority. What polarizes the right-wing bloc is the prime minister himself. Too many political players, even within his own party, hate Benjamin Netanyahu. Of course, this is not adequately reflected in the media, but it is hotly debated on social media. Two Likud members told us confidentially that everything would be much easier without Netanyahu: “During the elections there is no stronger magnet than Bibi, but after that everything is bogged down.”

Without Bibi at the head of the Likud party, a right-wing coalition would be possible. The leader of the breakaway party “New Hope,” former Likud minister Gideon Sa’ar, made this clear. “As soon as Bibi resigns, we are ready to join a coalition,” he promised. Without Bibi at the helm, a number of other party leaders would have an easier time cooperating with Likud, including Avigdor Lieberman, Naftali Bennett and Sa’ar – three parties, 20 seats. All three grew up politically under Bibi, but as soon as they became a threat to him, it was all over.

See related: “Bibi is King Saul and I’m his successor”

The others to the right are two ultra-Orthodox parties and the representatives of the national religious settlers’ movement (Religious Zionism party) lead by Bezalel Smotrich and the controversial right-wing extremist Itamar Ben Gvir. These three parties have pledged their loyalty to Bibi, but only with a big ‘but.” The Religious Zionism party warned Bibi not even to dream of forming a coalition with or that relies on the Islamists. Without Ra’am and Mansour Abbas, Bibi only has 59 seats, which is not enough. Bennett insists that there’s no point negotiating with Netanyahu if he can’t or won’t accept compromises that will give him a majority.

Can anyone even imagine that a coalition with right-wing extremists like Itamar Ben Gvir on one side and Islamists on the other could work? Furthermore, it would be like a political own goal for both parties. How could they possibly explain this to their constituents? Ben Gvir and Smotrich sitting with Arabs? Unheard of. And how could Abbas possibly justify to his Arab voters a union with disciples of Kahanism, an anti-Arab ideology on the fringes of the Israeli Right?

It’s more of an illusion than real politics. But you know, almost anything is possible with Bibi. After all, he switched course in the last election campaign and suddenly started wooing Arab voters. This angered many in the right-wing bloc because Israel is now at a political impasse. It was a political risk. 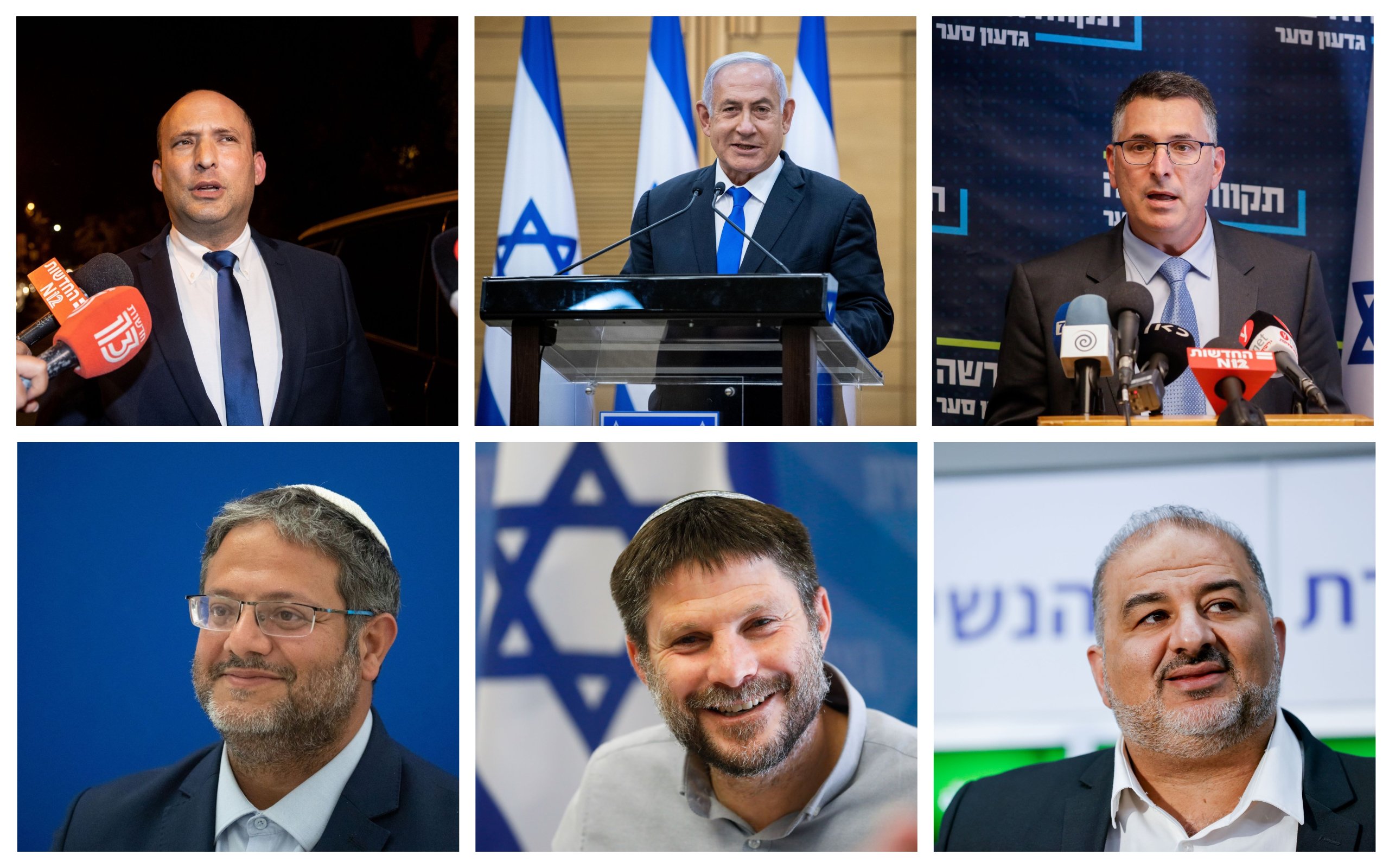 Who will sit with whom? Almost anything is possible with Bibi. (From top left: Bennett, Netanyahu, Sa’ar, Ben Gvir, Smotrich, Abbas)

Netanyahu spoke of a historic turning point in the country as he recalled Arabs recently greeting him on the street with “Abu Yair” (Yair’s father). And it’s true that we are at such a turning point, but not everyone takes it, or at least Netanyahu’s role in it, seriously. Israeli-Arab journalist Lucy Aharish sees it as a rather sad joke: “What is Bibi thinking? Does he really think that we Arabs are all stupid? Does he really think that if he can be celebrated as Abu Yair, will we all pull up and vote for him? Believe me, if Bibi wanted to win Yasser Arafat for his campaign now, he would be able to do that too. There is a saying in Arabic: you spit in my face and call it rain from the sky. We’ve had enough. Enough Bibi.”

Meanwhile, Netanyahu also tried to bring back the Likud’s prodigal son, Gideon Sa’ar. Standing before the camera with open arms, he said: “Come home and we’ll forget the evil between the two of us.” Sa’ar and his colleagues immediately refused. His whole election campaign was based on not cooperating with Bibi. “It is not the state that is [Netanyahu’s] chief interest, but rather himself. Israel’s policies are being determined based on ensuring his political future,” stressed Sa’ar’s right-hand man, Ze’ev Elkin, who also left Likud.

The Orthodox parties have meanwhile signaled to Bibi that the rules have changed and that they do not want a fifth round of voting. If the right-wing bloc under Netanyahu cannot form a coalition, then there are also opportunities on the other side in the political playing field with Yair Lapid, Naftali Bennett and Gideon Saar.

The right-wing players all understand that Bibi himself is the obstacle to a right-wing government coalition. Nobody likes to admit this, but it is a fact. And to get rid of Bibi, other ideas are buzzing behind the scenes, such as: Could Bibi be made president of the state? This would be a possibility, but it would still require some technical obstacles to be removed. Bibi insists that the next president be chosen in an open Knesset vote (the usual way it is done), and even then, his corruption trial would need to be suspended and his immunity reinstated should he win.

But first and foremost, Netanyahu must decide whether or not the vision of a strong right-wing coalition in Israel is more important than him remaining prime minister. Were he to choose the former, Bibi would have to give up his place at the top of the party. Regardless of which way this all goes, Israel’s longest-serving prime minister is going to at some point soon have check his ego at the door.