As Israel Today has reported in the past, Palestinian schoolbooks have been inciting Arab children to hate Israel for generations, notwithstanding the ebbs and flows of cooperation with Israel over the last 25 years.

Now, a recent “optimistic” report commissioned by the European Union (EU) claims that it found no incitement against Israel in current Palestinian textbooks for schoolchildren. (The report was carried out by the George Eckert Institute.)

However, a group of over 20 Members of EU Parliament disagree. These MPs are from the three largest parties in the European Parliament from the left, center and political and come from 15 countries. They are calling, in an open letter, on the European Commission to temporarily reduce funding for the Palestinian Authority until Ramallah stops anti-Semitic incitement in textbooks.

The members of parliament who signed the letter are connected with the Trans-Atlantic Institute in Brussels (TFI), of the American Jewish Committee. They cited the IMPACT-se Institute’s new Palestinian textbook study as completely disproving the EU “optimistic” report and therefore called on the European Commission to end its cooperation with the George Eckert Institute in Germany. This institute was asked to investigate the suspected incitement against Israel in Palestinian school textbooks.

The study, which cost more than 220,000 Euros, analyzed, among other things, Israeli government textbooks in Arabic taught in schools in Jerusalem* and presented them as supposedly Palestinian books promoting peace with Israel, suffering and acceptance of the other. For example, a map from an Israeli book with the word “Israel” on it was presented as if it were a proof of Palestinian recognition of Israel.

(We live in a rather complex reality in which some Arab neighborhoods of East Jerusalem have a combination of influence from both the Israeli government and the Palestinian Authority.)

The introductory review, also conducted by the same German institute, included basic translation errors that show a lack of professionalism and familiarity with Palestinian culture and the Arabic language. For example, the Arabic phrase “Hur Elain” meaning women who accompany Muslim believers in heaven has been translated as “horoscope.” Shimon Peres’ family name Peres was ridiculously translated as “water dock piers.”

The interim report on Palestinian textbooks “undergoing change” contains an example of a joint exercise of Israeli and Palestinian firefighters in which Israel is presented in a positive light. The researchers cite the example as “promoting tolerance towards Israelis,” giving up the old narrative of conflict and promoting co-existence. However, again, this example was taken from an Israeli textbook in Arabic and not from a textbook authored by the Palestinian Authority as was claimed. 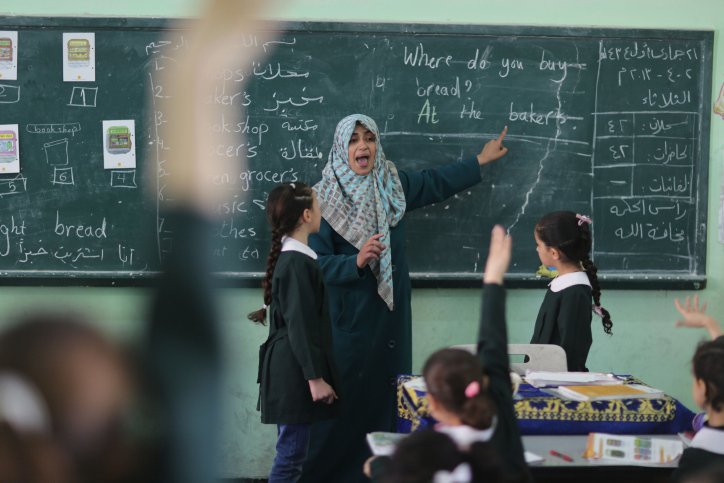 Trying to sidestep anti-Israel propaganda in Palestinian school books does not aid the quest for peace.

The 20 members of the European Parliament wrote:

”The textbooks of the Palestinian Authority are replete with disturbing anti-Semitic content and images, hate speech and incitement to violence, and the glorification of death and jihad in all grades and subjects. In order to promote peace and put an end to this harmful incitement, we propose that the commission freeze 5% of the funding for the Palestinian Authority until substantial positive changes are made.

”In view of the George Eckert Institute’s disturbing and error – filled interim report, it is inconceivable that the final report of that institute, to be published in December, could reflect serious and scholarly assessment and analysis of incitement in Palestinian textbook contents.”

”An EU that supports a two-state solution must take a clear stand against the misuse of aid funds to poison the minds of young Palestinians.”

A report by the IMPACT-se Institute, published last month on the Palestinian Authority’s updated textbooks for the year 2020-21, found that almost no positive changes were made to the curriculum, despite the Palestinian prime minister’s commitments in a cabinet decision to make changes.

”This initiative unites only a few of the hundreds of members of the European Parliament who voted overwhelmingly last May condemning hatred, anti-Semitism and incitement to violence in Palestinian textbooks. No wonder these legislators are frustrated by an interim report with such fatal mistakes, costing hundreds of thousands of euros. In the report, anti-Semitism and violence are ignored; terrorism is labeled as ‘resistance;’ and Israeli textbooks are used to praise the Palestinian curriculum.”

“The EU is financing a study of Palestinian textbooks against defined benchmarks (based on the UNESCO standards on peace, tolerance and non-violence in education).

“The study was launched in September 2019 and is to be concluded by the end of 2020. In July, an Interim Report was submitted to the EU for approval. Interim reports are working tools intended for monitoring purposes and do not contain robust conclusions. They provide partial information and non-conclusive assessments.

“The purpose of the Interim Report is to inform partners about the current status of progress and to refine the proposed methodology that was applied to a limited sample of textbooks, namely 85 textbooks of the PA curriculum for general education grades 8-10.

“The study does not look at Israeli textbooks. The methodology of the study will include a separate section on a very limited sample of textbooks used in East Jerusalem and modified by Israel for the purpose of comparison. The section on modified textbooks will clearly put the material analysed within its specific context.

“Taking these limitations into account, it is too early to draw conclusions.

“The findings have to be still validated in the Final Report, which will be finalized by the end of the year, based on a representative sample of 160-180 textbooks.

“The EU will present the findings of the study to stakeholders and the European Parliament and will inform the latter of the outcome of its bilateral dialogue with the Palestinian Authority.”

(end of the official EU response)