The American CIA sends a Swedish Christian businessman to manage illegal operations in Budapest, where he rescues thousands and disappears forever without a trace.

This may sound like a new spy novel, but it actually is the true story of a real-life hero. Raoul Wallenberg may not be a name you are familiar with, but you will never forget his story.

Yesterday in Israel and around the world, Wallenberg was remembered again on the anniversary of his disappearance.

Born to a Christian Swedish banking family, Wallenberg enjoyed a privileged childhood. His father, a successful businessman, made sure his son received a proper education, as the standard religious education was not enough for the Wallenbergs. To grasp the ever-changing complexities of modern life, Raoul was sent to study foreign languages, history and culture in Europe, the United States, Mexico and Africa.

Wallenberg eventually graduated from the University of Michigan in 1936, and was immediately offered a job at the Bank of Holland in Haifa, Israel. What did a Dutch bank have to do with Haifa? Prior to the establishment of the State of Israel and while the Land was still under British rule, many European businesses recognized huge potential in Middle East finances. With his intercultural and multilingual education, Wallenberg seemed right for the job, but the tense realities of the Mideast were a challenge even for his education. Book knowledge does not always make one streetwise.

And 1936 was a particularly tumultuous time for the emerging Jewish nation. That year marked the beginning of the “Great Arab Uprising.” These revolts were triggered by Arab alarm at the large number of Jewish immigrants arriving in the 1930s.  The last big immigration year at the time was 1935, when over 66,000 Jews had arrived in Israel, mostly from Germany, where conditions had become intolerable with the rise of Nazism.

Arab revolts were causing major problems. There were regular acts of sabotage against British forces, assassinations of government officials, strikes, withholding taxes, and the systematic murder of Jewish men, women and children, all resulting in an atmosphere of general chaos. These revolts eventually sparked a united Arab involvement in the “Palestinian cause” against Israel with their call to “push the Zionists into the sea.”

A decision is made

Wallenberg found himself trapped in a vice of violent warring enemies and had to make a choice. Would he join the overwhelming majority Arab populations with their superior weaponry, intimidating armies, and vast economic potential? Or could he support the 440,000 men, women and child refugees that made up the entire Jewish population of Israel in 1936?

His choice was to choose what is right regardless of consequences, a decision to stand on the side of moral integrity whether or not it is safe or expedient. We may never understand fully why Wallenberg cast his lot with the Jews, but it was this single decision of this one man that changed the course of history for so many.

He returned to Sweden and attained a job in Stockholm at the Central European Trading Company, an export-import company trading between Stockholm and central Europe, owned by Kalman Lauer, a Hungarian Jew.

When World War II finally broke out in 1939, Sweden remained neutral while all across Europe Jews were being forced to wear identity badges. They lost their jobs, could not travel, and were not allowed to attend schools with non-Jews. For Wallenberg, these were not just headlines in the news, but Jewish people he knew and had come to love. These were his friends.

At the time, the United States was just beginning to understand how bad the situation was for European Jews. After procrastinating far too long, President Roosevelt finally decided that the Americans needed to get involved. They established the War Refugee Board (WRB) as part of a clandestine effort through CIA operatives to try to save as many Jews as possible from the Nazi death camps.

At the same time the Swedish government was also making serious attempts to save the Jews in Hungary. Hungarian Jews had remained safe for most of the war until Hitler discovered that Hungarian officials were holding secret talks with the Americans and the British. As a result, in March 1944, Nazi troops marched on Budapest. Between May and July 1944, Adolf Eichmann deported 400,000 Hungarian Jews by freight train to Auschwitz. Nobody knew what to do.

In the search for someone willing and able to go to Budapest to try and organize some kind of a rescue mission for the nation’s Jews, Swedish authorities contacted a relief committee led by the Swedish Chief Rabbi Marcus Ehrenpreis. One member of the committee was Wallenberg’s business associate Kalman Lauer.

Wallenberg was sent to President Franklin Roosevelt to discuss a plan. The plan was dangerous and brazen, but when Roosevelt saw the determined look on Wallenberg’s face he decided, “This is the man for the job!”

Wallenberg would be sent under diplomatic cover and lead the rescue operation. At the time, Sweden was still considered a neutral country and Swedish diplomats were able to travel freely across Europe. Wallenberg was appointed second secretary to the Swedish diplomatic mission to Hungary and moved to the capital Budapest.

With US Defense Department finances, Wallenberg rented 32 buildings around Budapest and declared them to be extraterritorial, protected by Swedish diplomatic immunity. Wallenberg knew that the Nazis were overly impressed by official government emblems, so he put up intricately designed official looking signs on the buildings such as ”The Swedish Library” and “The Swedish Research Institute.” He hung oversized Swedish flags on the front of the buildings and put up shiny embossed government shields on the doors.

Apparently, 32 Swedish “libraries” were not suspect as long as they had well-crafted “official” signs on the doors. As Nazi troopers stormed house-to-house looking for Jews, word traveled fast on the well-oiled Jewish “grapevine” that all those new Swedish “libraries” in town were actually safe houses. Wallenberg’s buildings provided shelter for over 10,000 people. The Nazis never discovered the plot.

Wallenberg employed over 350 people in rescuing Hungarian Jews. He himself had to sleep in a different building every night to avoid being captured by the Nazis. These were scary times and Wallenberg’s life was in danger with every Jew that was saved, but his determination “to do the right thing” kept him going. 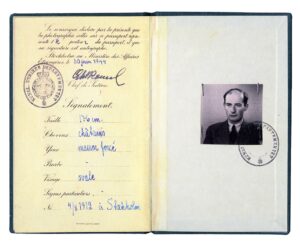 And yet he knew he still had to do more. Given the Nazi’s obsession with official-looking documents, Wallenberg began printing “government authorized” protective passports or ”Schutzpasses.” These documents identified the holders as Swedish subjects awaiting repatriation and thus prevented their deportation. Although not legal, these documents looked official and easily fooled the bureaucratically-minded German authorities. Thousands of Jews never had to get on those trains to Auschwitz thanks to Wallenberg’s clever passes.

Sometimes the authorities became suspicious of these fake Schutzpasses. Especially when the holder did not look at all like a blond-haired, blue-eyed Swede! In these cases, Wallenberg was more that happy to provide bribes in order to convince authorities to approve the pass. For Wallenberg, there was no question. Troubled times require drastic measures, and that included bribery, falsifying papers, deception and illegal practices if just one more life could be saved. Estimates say Wallenberg saved over 100,000 Jews.

There were times, however, when none of Wallenberg’s tricks worked. The Nazi’s had occupied all of Hungary and there just weren’t enough “libraries” or Shutzpasses to go around. Risking his life time and time again, Wallenberg would chase down the trains leaving Budapest station for Auschwitz and drag Jews off the trains. Witnesses say that Wallenberg was overcome with grief and could not stop himself from rescuing more Jews. As people watched him running and shouting to try and pull another Jew off the train, they were inspired. “Why can’t I do something like that to help my Jewish neighbors?” they thought. His name became known throughout Europe as the one man who would do anything and everything to help save a Jewish life. God only knows how many others were inspired to save Jewish lives because of Wallenberg’s example.

The Red Army finally drove the Nazis out of Hungary in 1945. Soviet authorities sent for Wallenberg saying they wanted “to discuss protection of the Jews in Budapest.” But it was a trick. Incredibly, the Russians suspected Wallenberg of being an American spy! In spite of all he had done to save so many Jews, the Russians considered his connections to Roosevelt and the US Defense Department a threat. Wallenberg was last seen on Jan. 17, 1945, in Budapest, when he drove off to meet Soviet authorities.

American, Swedish and Israeli officials have pressed the Russian government to reveal the facts concerning Wallenberg’s imprisonment and death. Russian officially admitted only on December 22, 2000 that Soviet authorities wrongfully imprisoned the Swedish diplomat Raoul Wallenberg, who later died in a Soviet jail. According to the statement, Wallenberg and his driver, Vilmos Langfelder, ”were repressed by Soviet authorities” and arrested without being charged with a crime. They had been described as ”socially dangerous,” the statement said.

This acknowledgment, by the prosecutor general, explains nothing of what really happened and fails to reveal any of the details surrounding Wallenberg’s death. However, a special commission investigating victims of Stalin’s political terror said he had been executed in the infamous Lubyanka prison at KGB headquarters.

Until this day governments, institutions and individuals around the world from Argentina to Australia erect parks, memorials and museums remembering Wallenberg. Tens of thousands of children around the globe go to a “Raoul Wallenberg School” in places like Ecuador, Venezuela and Uruguay. 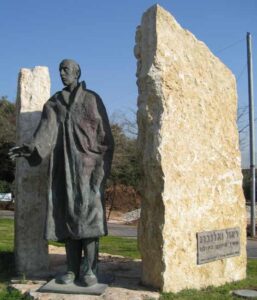 In Canada, Wallenberg was made the first ever “Honorary Citizen,” and January 17th , the date he disappeared, was declared “Raoul Wallenberg Day,” a national holiday. He is also an honorary citizen of Israel, the US, Australia and the city of Budapest.

The University of Michigan awards the Wallenberg Medal to outstanding individuals committed to the values embodied by the man himself. The first Wallenberg Medal was presented in 1990 to Elie Wiesel.

Israel has named at least five streets after Wallenberg. On Raoul Wallenberg Street in Tel Aviv there is a statute identical to the one erected in Hungary, where his image continues to inspire generations of Jews and Gentiles that “one man can make a difference.”

The list goes on and on of the places and the people around the world that continue to be inspired by his story. Inspired to fight for what is right, when no one else will, choosing to care when others wouldn’t dare.

Raoul Wallenberg, a name to remember.