Santa Inc., the new HBO Max series released on December 2, is for now the lowest-rated TV show ever on IMDb. This new animated series stars Seth Rogen as Santa Claus and Sarah Silverman as a female elf who wants to become the next Santa. Though for now it’s difficult to determine if this series is a critique or an endorsement of “Wokeism,” it seems that, given the cast, the latter might be true, which might be one reason why Santa Inc. has such low ratings.

And trust the antisemites that they will be the first to note that Santa Inc. is Jewish propaganda. True or not, why indeed hide the fact that creator Alexandra Rushfield is Jewish, as are Rogen and Silverman and almost everybody else in this show, as illustrated in the Australian Jewish conservative news portal Shekelhertz. 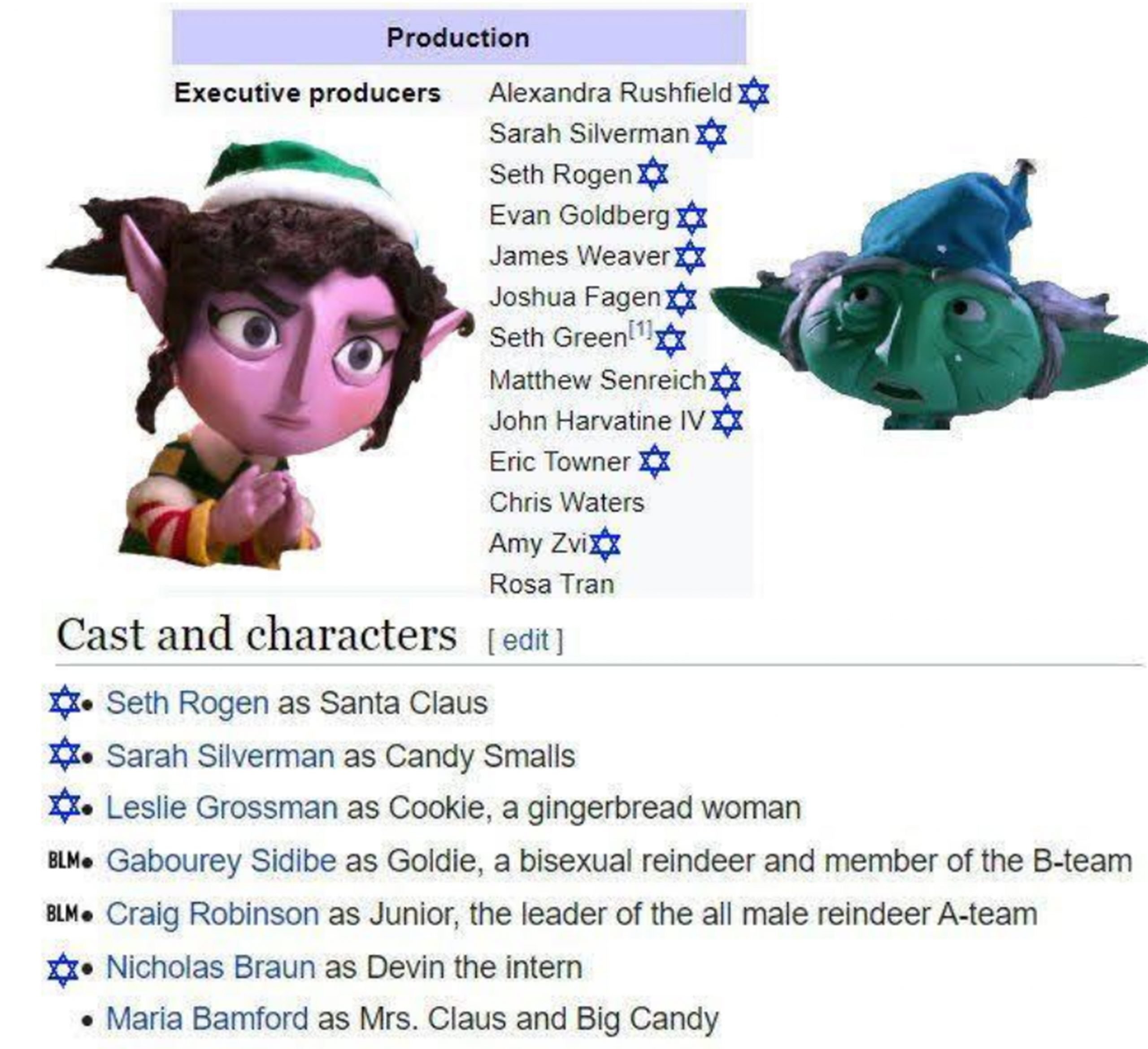 And if Jews take pride in Jewish Nobel Prize winners, shouldn’t they also take pride in the Jews who created Santa Inc.? Surely some do.

Others would say that Jews involved in a “comedy” that ridicules and tramples over Christmas are fanning the flames of antisemitism. One comment regarding this show that seems to resurface on Twitter says, “…and for no reason people voted Rudolph into power.” No, the reference here is not to cute little Rudolph the Red-Nosed Reindeer. Antisemites have long been accusing German Marxist Jews of creating the political conditions that allowed Hitler to rise to power. Jews like President Kurt Eisner of the short-lived People’s State of Bavaria were perceived by Hitler as representing the Jews in their effort to dismember Germany. It was Eisner who, so to speak, gave people the reason to vote “Rudolph” into power.

And to no one’s surprise, antisemitic comments became so virulent that the popular Reddit website, for one, deleted one comment starting with “why does it always seem that Jews hate whites?”

And it may be that outright antisemitic comments have forced HBO to turn off the “DISLIKE” button. For now, at least, they don’t want anyone to think that they’ve given people reason to vote Rudolph into power.

Why so many Jews would participate in what appears to be a show drenched in Wokeism is not that hard to guess. Jews, as so many of them have been since the dawn of modernity, found themselves at the forefront of social movements seeking to mend the world. Socialists like Leon Blum, France’s first Jewish prime minister, justified what may ultimately be referred to as Jewish nihilism, by casting Jewish revolutionaries as the modern manifestation of the ancient spirit of the Jewish race, a conclusion Karl Marx would have vehemently opposed, but never mind.

If one sees Santa Inc. as yet another show capitulation to the Black Lives Matter agenda, then this show does reflect the values of the latest social movement that is attempting to turn the world into a better place. In that case, one would likely to find Santa Inc. palatable. But for those who do see Santa Inc. as endorsing Wokeism, this show promotes the latest version of nihilism expressed in vulgar, foul-mouthed fashion perfectly suited to comedians like Rogen and Silverman who, not surprisingly, are also very critical of Israel, with Silverman endorsing the BDS movement.

In response to the overwhelming negative responses, Rogen and Silverman have opted for the easy way out. They labeled their critics antisemites. Rogen shrugged it all off by calling his critics “white supremacists.” Silverman went for “Jew hatred.”

In the wake of all the commotion around this show, it no longer makes any difference what’s the true agenda of Santa Inc., or why it should have an agenda at all. It is obvious that most people perceive it as a progressive-driven show almost entirely made of Jews.

And again, one can’t help but remember how Jews or ex-Jews dominated the culture scene of 1920s Germany. Jews, Rogen and Silverman included, should learn the lesson from “comedians” or satirists like Mortiz Saphir, Ludwig Berne, Kurt Tucholsky or Karl Kraus, to mention but a few who ridiculed everything German, from the Kaiser to the Junkers to the hypocritical bourgeois to the simpleton farmer and everything in between. It was renowned Jewish historian Simon Dubnow who noted that these were Jews who fomented Germany to the point of rekindling the “everlasting hate of the gentiles.” God forbid that Santa Inc. would be another threshold crossed to the point where Americans will seriously begin to consider the option of voting Rudolph into power.

Warning: Crude language is used in the following trailer: