In May of this year Israel fought another war against Gaza’s terrorist rulers. The difference this time was that Hamas succeeded in inciting the Israeli Arab population to join the fighting, resulting in chaotic internal violence in Israel’s mixed Jewish-Arab cities.

By the time the dust had settled, three Jews had been killed, many more were wounded, 386 Jewish home had been looted, 673 damaged and fire was set to 10 synagogues, 112 houses and 849 cars. By contrast, just 13 Arab homes were damaged and 13 Arab cars burned. Many likened the situation to an anti-Jewish pogrom right in the heart of the Jewish state.

The major flashpoints were the cities of Lod, Ramle, Akko and Haifa.

Jewish residents of these cities repeatedly reported that police were failing to curb the violence and protect innocent citizens from the rioters, some of whom were their own neighbors.

So now they want guns, to protect themselves.

Since mid-May, the Ministry of Internal Security has received 10,580 applications for personal firearms. That marks a 500% increase over the same time period in years prior to the rioting.

Tzur Raanan, a resident of Lod, told Makor Rishon that while he for years rejected the notion of carrying a personal firearm, he now sees it as a basic necessity.

“Everyone who was in Lod during the riots now understands that it is not possible to trust law enforcement and security forces alone for our safety,” Raanan said. “The houses of many of our neighbors were stoned, there was shooting in the street here, and they tried to break into my house. I found myself going to bed with a hammer so that I’d have something with which to protect myself and my family.”

“Every Jew carrying a weapon here in the neighborhood is a blessing,” he told the newspaper. “It’s another person who can protect himself and others. On the first night of the riots, there were people here who called the police but did not receive help. So we contacted local armed citizens and everyone took responsibility for protecting a certain street, building or area of the neighborhood.”

The sharp rise in gun license applications comes even as new Interior Security Minister Omer Bar-Lev is trying to reduce the number of personal firearms in the country.

Contrary to popular belief, Israel is not awash in personal firearms. Just 140,000 or so private citizens have a gun license. That is, of course, in addition to the IDF soldiers and members of the security establishment who are armed at all times. 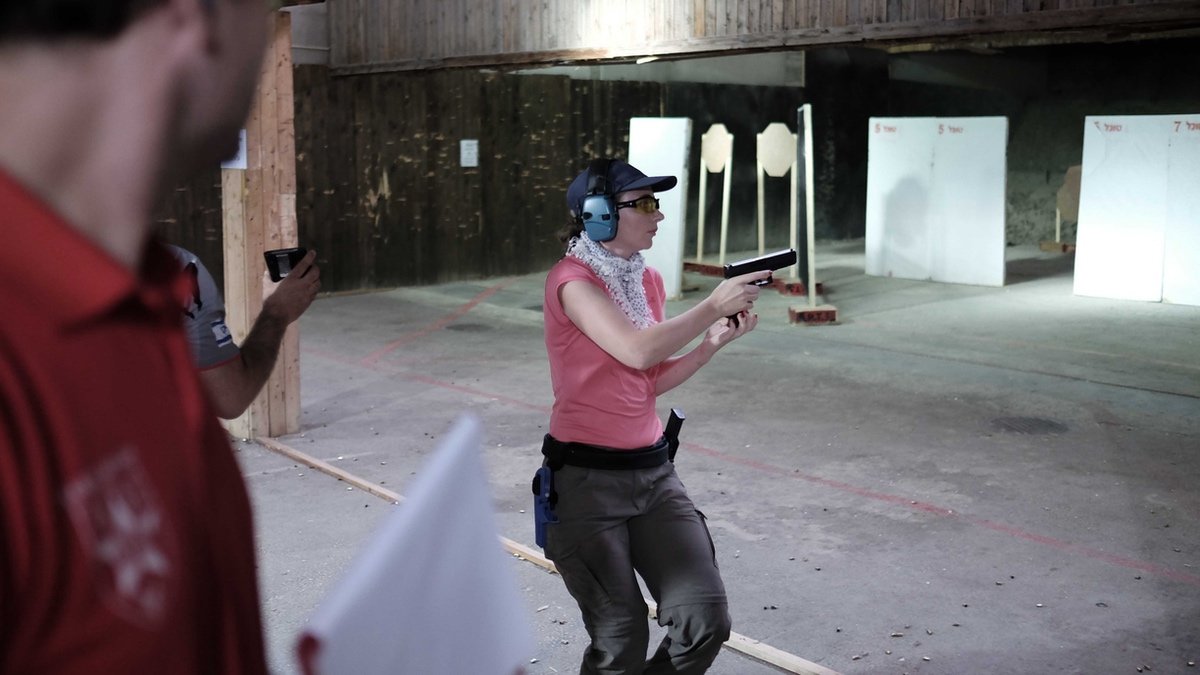 Israeli woman at a shooting range in Herzliya. Contrary to popular belief, most Israelis don’t own a gun.

Still, Bar-Lev would like to see that number come down. But that’s unlikely to happen so soon after the May riots.

It also goes against the more popular policies of the previous Likud-led government. Bar-Lev’s immediate predecessors, Amir Ohana (Likud) and Gilad Erdan (Likud), both greatly expanded the eligibility for personal firearms to include some 500,000 additional citizens who had formerly been IDF combat soldiers.

Ohana explained at the time that putting more guns in the hands of more responsible and properly trained citizens would actually serve to reduce violence and thwart terrorism.

“Civilians who know how to use guns and carry them in public provide a higher sense of security and an important defense against terrorism,” said Erdan at the time.

Ohana added: “It is time to put an end to the dangerous policies of recent decades that force our citizens to defend themselves against terrorists with guitars, shopping trolleys, pizza trays and umbrellas. A civilian who has neither a criminal record nor health problems, who is or was a reservist, should be allowed to defend himself and others. Such a person is not the problem, but rather the solution to our security situation.”

A couple years earlier, at height of the “knife intifada,” then-Jerusalem Mayor Nir Barkat (today a Likud member of Knesset) urged his city’s residents to walk the streets armed. “Possessing weapons increases the confidence of residents, who know that in addition to police there are many people who are not afraid to intervene,” insisted Barkat.