(JNS) People dining this week on the charming terrace at Jerusalem’s King David Hotel were surprised to find at the next table Ursula von der Leyen, president of the European Commission.

Given the EU’s long-standing hostility towards Israel, it was a bit like spotting Amber Heard knocking back the tequila with Johnny Depp in a Los Angeles bar.

That may be unfair to von der Leyen herself, who was described later that day by Israel’s prime minister, Naftali Bennett, as “a great friend of the Jewish people and a great friend of Israel.”

She had certainly come to Israel on a charm offensive. In a speech at Ben-Gurion University, where she was awarded an honorary degree, she said: “I have put the fight against antisemitism and fostering Jewish life in Europe at the core of the European Commission’s agenda. Our democracy flourishes if Jewish life in Europe flourishes, too. Throughout the centuries, the Jewish people have been ‘a light unto the nations.’ And they shall be a light unto Europe for many centuries ahead.”

So she pressed all the right buttons about the Jewish people. The real reason for her trip, however, was panic.

As a result of Russia’s war against Ukraine, the EU has boycotted Russian natural gas. This has left its energy supplies seriously depleted. Until the war, Russia was supplying some 40% of the gas that Europe consumes.

Now that Israel has emerged as a major player in the energy market, the EU is desperate to import Israeli gas to keep the lights on this coming winter. This week, it signed a deal that will see Israeli gas sent to Egypt, where it will be liquefied and from there shipped to Europe where it will be changed back to gas.

Von der Leyen also gushed over the planned pipeline from Israel to supply Eastern Mediterranean gas to Europe (a project from which the Biden administration has withdrawn American support). The EU is even siding with Israel in a row with Lebanon over Karish, Israel’s major northern offshore gas field, which Brussels agrees lies in Israeli rather than Lebanese territorial waters.

Also paying a visit to Jerusalem this week was Italy’s Prime Minister Mario Draghi. He, too, was in search of alternative energy supplies to replace Russian gas. He, too, had honeyed words for the Jewish people.

Speaking at a Jerusalem synagogue, he said his government was “committed to strengthening the memory of the Holocaust and to fighting against discrimination of all kinds against Jews.” 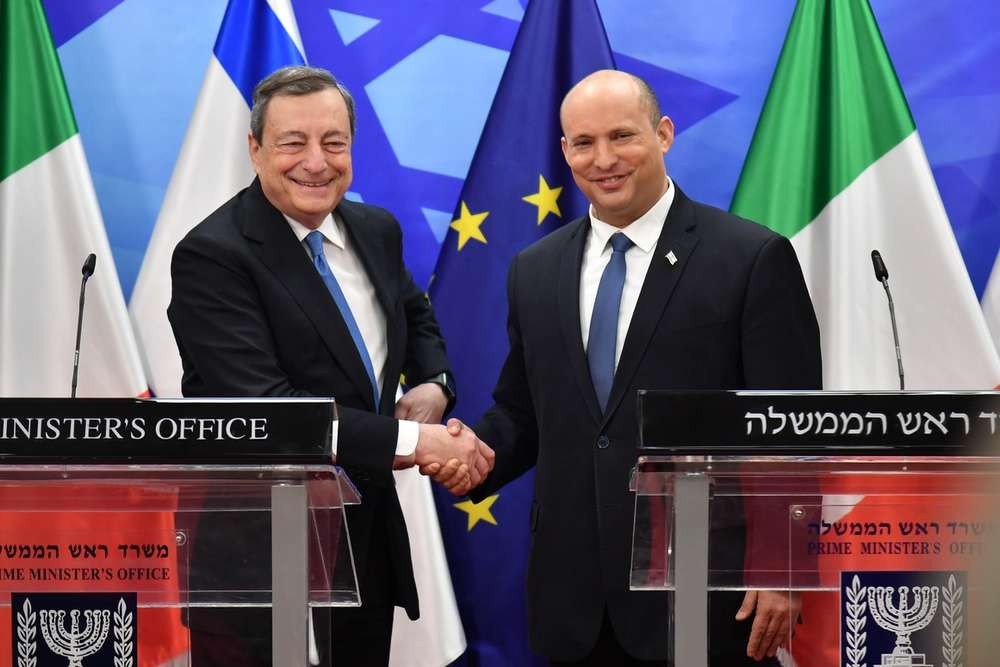 So does this mean the EU is now changing its attitude to Israel? Until now, it has been hostile. It promotes the Palestinian narrative that seeks to delegitimize Israel through lies about its “illegal” settlements and alleged Israel Defense Forces’ aggression; it funds NGOs devoted to harming and destroying Israel; in an aggressive move in 2015 against Israeli “occupation” of the disputed territories, it started to label products from the “West Bank.”

See related: Labeling of Judea and Samaria Goods Is About Discrimination, Not Law, Say Experts

Despite all the warm words in Jerusalem, there’s no sign that this EU hostility is about to ease. For on the same day that von der Leyen was kissing up to Bennett, she stood alongside Palestinian Prime Minister Mohammad Shtayyeh in Ramallah and announced the transfer to the Palestinian Authority of some 214 million euros (about $224 million).

This money had previously been frozen because of the incitement against Israel in Palestinian schoolbooks. Now it’s been unfrozen, even though the incitement remains.

Last week, the commission dismissed Israeli documentation showing that six Palestinian NGOs were acting on behalf of the Popular Front for the Liberation of Palestine; it then resumed funding them.

So much for von der Leyen’s pledge to “put the fight against antisemitism at the core of the European Commission’s agenda.” 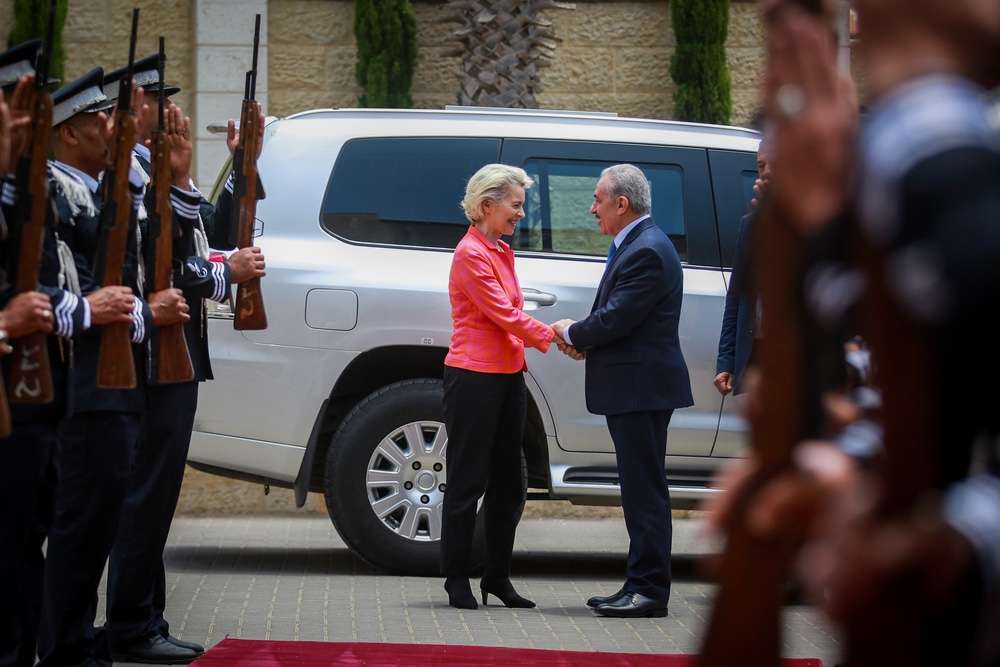 Immediately after her conciliatory remarks in Jerusalem, von der Leyen headed to Ramallah, where she made dangerous concessions to the Palestinians that belied her commitment to combat antisemitism. Photo: Flash90

The Europeans are playing the double game so familiar in the West—pledging support for the Jewish people while empowering Israel’s mortal enemies. Now the global energy crisis is producing a further double game—supporting Israel when it supplies the Europeans with essentials while abandoning Israel in its defense against its existential foes.

This twin-track has long been the strategy of both Britain and America. They maintain deep ties with Israel over military and intelligence cooperation along with mutually beneficial trade links; but at the political level, they undermine Israel’s security and promote the Palestinian narrative of lies and distortion.

But there’s also something even more twisted. The British and Europeans in particular resist acknowledging that antisemitism is the motor of Palestinian aggression because of a neuralgic obsession arising from the collective guilt they feel about the Jews.

They refuse to acknowledge the protean nature of antisemitism throughout history, morphing from theological to racial to national, because their own culture was so deeply involved in this bigotry. They pay pious lip service to Jews murdered in the Holocaust. But in order to pretend that their own culture had nothing to do with how they died, they present Israeli Jews as a different breed altogether.

While the Jews murdered in the Shoah are depicted as passive and powerless, Israeli Jews are presented as militarily powerful. Because they have power, it is assumed they cannot be victims. 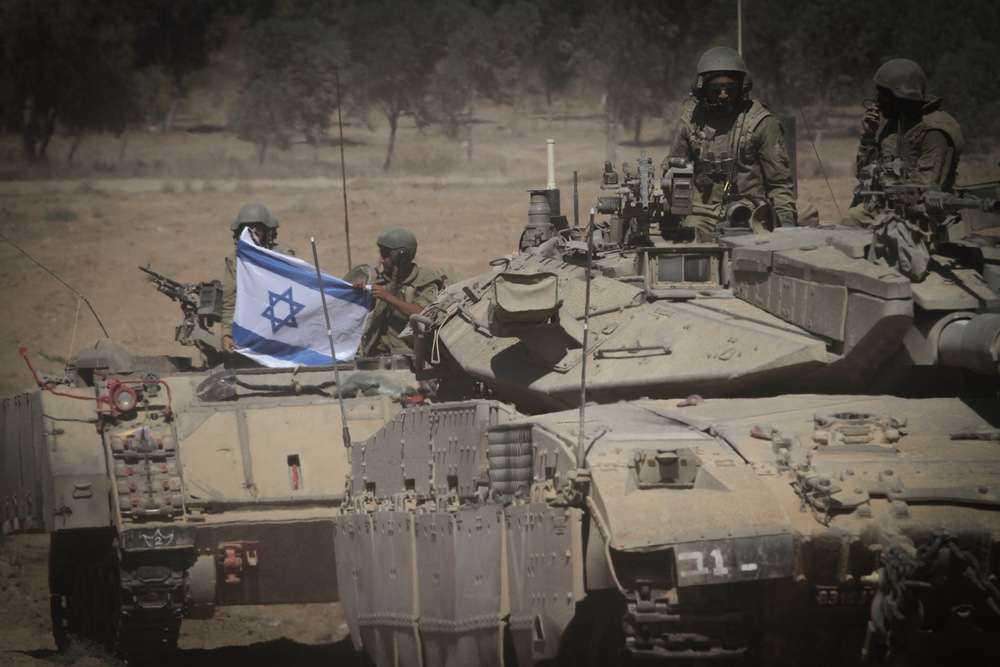 Israel’s strength does not mean it’s not a victim. It’s just a victim that will no longer take a beating lying down. Photo: Albert Sadikov/Flash90

Since the Palestinians are viewed as powerless, it’s assumed, in turn, that they must be victims of the Israelis. Palestinian antisemitism must be denied because that would instead turn Israeli Jews into victims. That must be resisted.

For casting Israeli Jews instead as oppressors, thus erasing the unbroken line of antisemitism from antiquity to the Palestinians, gives the Europeans a free pass in their minds over the victimization of the Jews in the Holocaust in which they feel at some deep level complicit.

In this respect, another remark by von der Leyen was as revealing as it was jarring:

This was an extraordinary thing to say. The history of the Jews in Europe is one of centuries of murderous persecution, mass conversions, hideous pogroms, and eventually, the Holocaust. Historically, Europe was the epicenter of antisemitism and was described by Israel’s first prime minister, David Ben-Gurion, as “the graveyard of the Jewish people.”

Yet von der Leyen implied instead that Europe had always been bound together in friendship with the Jewish people.

No less startling was that Bennett chose to agree with her. “You said Israel and Europe are bound to be friends and allies because the history of Europe is the history of the Jewish people. I could not agree more,” he said.

Was Bennett choosing to accept her revisionism in the interests of better relations with the EU? His eagerness for such a development is understandable. But no Jewish leader should ever connive at sanitizing Jewish persecution.

The Europeans come and make nice with Israel’s government when they need what Israel has to offer them. They rely on Israel to do their dirty work for them in fighting off the Iranian regime.

But when it comes to acknowledging their obligation to defend and protect Israel against the enemies of the Jewish people and of civilization itself, we shouldn’t hold our breath.

Melanie Phillips, a British journalist, broadcaster and author, writes a weekly column for JNS. Currently a columnist for “The Times of London,” her personal and political memoir, “Guardian Angel,” has been published by Bombardier, which also published her first novel, “The Legacy.” Go to melaniephillips.substack.com to access her work.