One of the new government’s main stated goals is to heal Israeli society of the animosity created by the clash between the two diametrically-opposed visions of a Jewish state vs. a civic state. If you’re wondering how that might be possible, then Yoel Esteron, publisher and chief editor of the financial daily Calcalsit explains. Healing is possible only by the eradication of “Bibism.” According to Esteron, Bibism is characterized by “harming democratic principles, harassment of political opponents, destabilization of the rule of law, corruption of the civil service, the brutalization of public discourse, and street violence.”

Therefore, he says, “while Bibi has gone, the real challenge is still ahead of us – to get rid of Bibism, not only from the government, but from all across the realm of a democracy that has been ransacked and humiliated.”

Everyone knows that there is no terror without terrorists, just as there is no Bibism without Bibists, which is the derogatory name given by the Left to Benjamin Netanyahu’s supporters in particular, and the Right as a whole. Healing, therefore, is possible only with the disappearance of Netanyahu’s supporters. How they will disappear, well there is a range of things that can be done. The easiest and most obvious steep is social media censorship of right-wingers, which has already begun. Emi Palmor, recently appointed to the Oversight Board of both Facebook and Instagram, will see to that. And Palmor is quite an achiever, considering her endless titles, only some of which are listed in Wikipedia. And by the way, if one ever wonders what a “deep state” is, check out superwoman Palmor.

But other things can also be done, like purging the civil service echelon of hostile elements, as well as cleansing the media of the few remaining right-wing journalists, like Amit Segal and Yaakov Berdugo, who as it is are barely surviving their hostile work environment. Other steps might include “training for change,” like what white people are now being made to do in America. Could “training for change” for Bibists become mandatory?

Yoel Esteron is by no means a lone voice. On the contrary. It would be fair to say that he expresses the sentiment of the Left bloc, which sees Netanyahu and his supporters as a menace. On the day the new government was sworn in, there was a nighttime celebration at Rabin Square in Tel Aviv. It wasn’t as big as the organizers were hoping, but a celebration it was, not for the victory of the Left bloc, but for the defeat of Netanyahu and the Right bloc. Israeli singer Ahinoam Nini prepared in advance for the occasion. She wrote a song in which she sings joyfully “together we got rid of Haman, we got rid of Haman.”

Haman from the Book of Esther, to remind everyone, is a failed Hitler-like character who was hanged over his scheme to annihilate the Jews. In today’s left-wing context, Netanyahu is a failed Haman who sought to destroy Israel’s democracy. Though Nini kind of apologized, her comparison sits well with many, who today are replacing “Jewish” with “democracy,” which makes the comparison somewhat nonsensical. 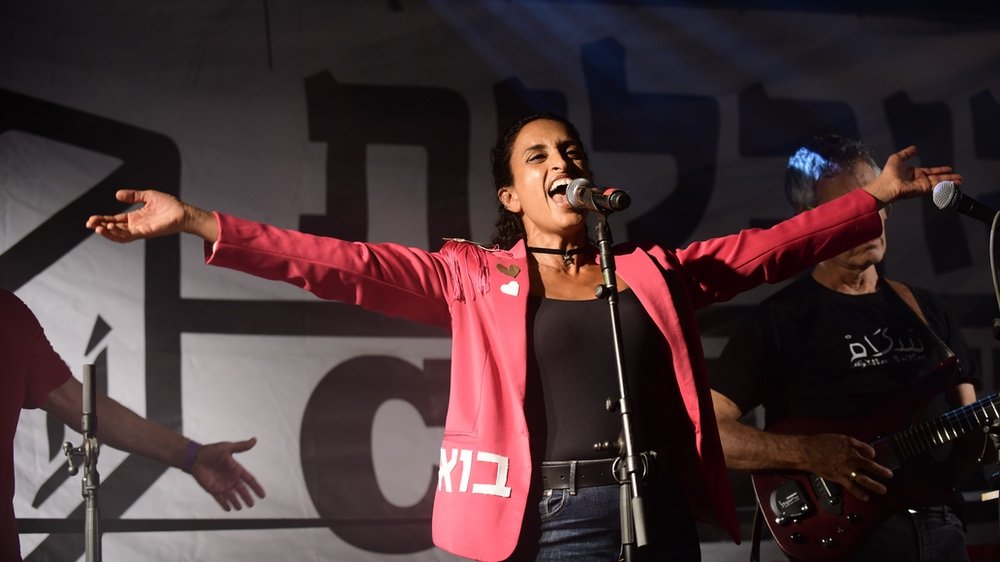 Nini got the crowd in Tel Aviv going with her virulent verbal assault on Netanyahu.

Haaretz columnist Rogel Alper was quick to reject Nini’s supposed apology. We should compare Netanyahu to Haman, he wrote, because “for democrats, liberals, anti-occupation activists – Netanyahu is ‘Haman’. A man who came to exterminate a whole civilization of values … we shouldn’t hide the truth … we hate Netanyahu … this is one of the most justified hatreds there are. Yes, we rejoice over his downfall.” But this isn’t enough. Like Esteron, Alper too thinks that even in the opposition Netanyahu still poses an immediate and real danger to Israel’s democracy. This is why it is so important to exterminate Bibism now.

Alper’s concern for democracy came on the day the new “government of change” effectively suspended democracy for at least one month by prohibiting any private legislative initiatives. The reason, explained coalition chairperson Idit Silman, is to allow the new government to enter smoothly into its role and avoid internal strife. And Esteron’s concern for democracy came on the day that the leader of a party with just 7 seats in Knesset, Naftali Bennett, was sworn in as a prime minister.

Like the Energizer Bunny, the “just-not-Bibi” movement has not come to an end with his removal from power. It just keeps going, and will do so until Bibism is eradicated. The hoped-for healing will come only when what the Left sees as Netanyahu’s “democtatorship” and an “apartheid” Jewish state full give way to and are replaced by their own flawed defection of real democracy.