(JNS) The Palestinian leadership is demanding two things from US President Joe Biden in advance of his upcoming visit to the Middle East: renew US aid to the Palestinian Authority and reopen the offices of the Palestine Liberation Organization (PLO) in Washington, DC. The problem is that the PA is knowingly and openly violating two provisions of US law, thus triggering a prohibition on providing the bulk of US aid to the PA and reopening the PLO offices. The PA, in other words, is implicitly demanding that Biden either ignore US law or actively pursue a change to widely accepted bipartisan legislation.

The first violation is the PA’s attempt to bring a case against Israel at the International Criminal Court (ICC). Top PA officials have confirmed that it is doing so.

In a June 9, 2022 report on official PA television, PA Minister of Foreign Affairs Riyad al-Maliki expanded on the ongoing discussions between the PA and the ICC prosecutor. He also confirmed that the PA is seeking to include the killing of Al Jazeera journalist Shireen Abu Akleh in any investigation. Al-Maliki added that the PA also wrote to the ICC prosecutor, urging him to add the “crime of apartheid” to the subjects the prosecutor needs to investigate.

The reporter stated, “Al-Maliki and his accompanying delegation discussed ways of developing the activity and cooperation with the Court, and all the complaint cases against Israel. The ICC also received the evidence, proof and report of [PA] General Prosecutor [Akram al-Khatib] on the case of the assassination of Palestinian martyr journalist Shireen Abu Akleh and the occupation’s crimes against our people with all its layers.”

Al-Maliki is then quoted as saying, “We submitted a copy to him of the results of the investigation carried out by the Palestinian general prosecutor regarding the assassination of journalist Shireen Abu Akleh, and the results of the investigation. He officially asked us to provide him with details about this investigation so that he would be able to follow this issue with the necessary seriousness. We gave him a letter discussing the need to add the crime of apartheid as part of the [Israeli] crimes that the ICC needs to investigate.”

Al-Maliki’s discussion with the ICC prosecutor followed a statement by PA leader Mahmoud Abbas in which he rejected Israel’s call for a joint investigation into the killing of Abu Akleh. He said the PA would “immediately go” to the ICC.

Official PA daily Al-Hayat Al-Jadida stated on May 13, 2022: “[PA] President Mahmoud Abbas held the occupation authorities fully responsible for the crime of killing journalist Shireen Abu Akleh. In a short speech during the funeral ceremony of martyr Abu Akleh at the presidential headquarters in Ramallah yesterday … the president said: ‘We have refused and will refuse a joint investigation with the Israeli authorities, because they committed the crime and we do not believe them and will immediately go to the International Criminal Court (ICC) to prosecute the criminals.’”

It is clear that this attempt to exploit the ICC is forbidden under laws related to US aid to the PA. 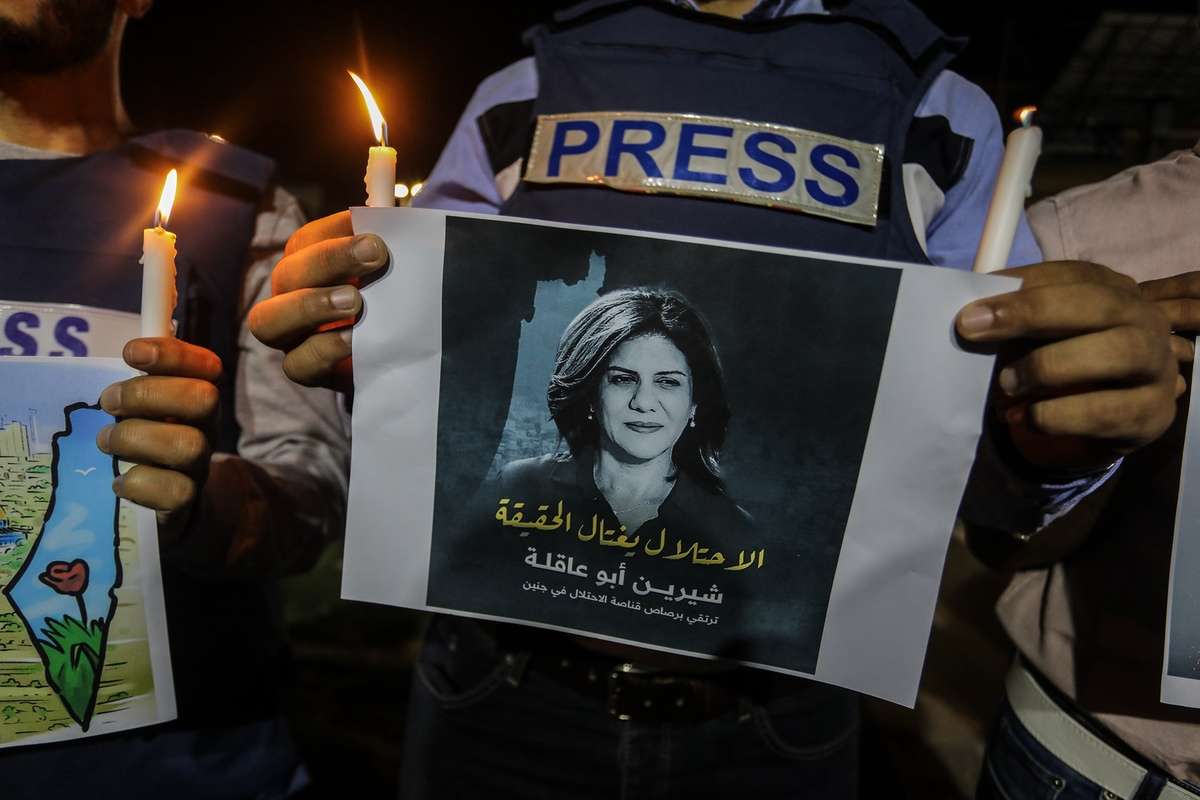 Palestinians get noisy over the killing of Al Jazeera journalist Shireen Abu Akleh. But would they even care if her death couldn’t be blamed on Israel? Photo: Abed Rahim Khatib/Flash90

For the most part, US bilateral aid to the Palestinians is divided into three categories:

Passed in January 2014, the Consolidated Appropriations Act, 2014 blocked ESF aid to the PA if the Palestinians “initiate an International Criminal Court (ICC) judicially authorized investigation, or actively support such an investigation, that subjects Israeli nationals to an investigation for alleged crimes against Palestinians.” The same provision has been adopted every year since, most recently as part of the Consolidated Appropriations Act, 2022, which became law on March 15, 2022.

The demand to reopen the PLO office is also a clear violation of US law.

Section 1003 of the Foreign Relations Authorization Act, Fiscal Years 1988 and 1989 states, inter alia, that the PLO may not “maintain an office, headquarters, premises or other facilities or establishments within the jurisdiction of the United States at the behest or direction of, or with funds provided, by the Palestine Liberation Organization or any of its constituent groups, any successor to any of those or any agents thereof.” While PLO offices were eventually opened in the US, they were closed under the Trump administration.

The Consolidated Appropriations Act, 2022 does state that in certain circumstances the president can waive that prohibition. To do so, however, the president needs to show that the Palestinians have not “obtained in the United Nations or any specialized agency thereof the same standing as member states or full membership as a state outside an agreement negotiated between Israel and the Palestinians; and initiated or actively supported an ICC investigation against Israeli nationals for alleged crimes against Palestinians.”

The PA has repeatedly violated that provision. In 2018, the PA petitioned the ICC to open an investigation against Israel. In March 2021, the ICC prosecutor opened a “judicially authorized investigation.”

As part of this process, PA officials secretly colluded with the ICC prosecutor, conducting over 80 meetings. Indeed, the relationship between the ICC prosecution and the PA was so close that the prosecutor even secretly updated the PA on the decision to open an official investigation, asking that the PA “keep secret” the decision. In fact, the PA felt so confident about its relations with the ICC that it went so far as to submit falsified documents to the Court.

In addition to the provisions of the Consolidated Appropriations Act, ESF aid to the PA is also blocked by the Taylor Force Act, which conditions the aid on the abolition of the PA’s payments to terrorist prisoners, released prisoners, wounded terrorists and the families of dead terrorists.

As Palestinian Media Watch has shown, the PA has consistently refused to meet the requirements of the Act, repeatedly declaring that the terror reward payments are its first priority.

As Biden prepares to meet with Abbas, he would do well to clearly and unambiguously state that the reason the PA is not receiving US aid is because the PA is knowingly and intentionally flouting US law.

This article was originally published by Palestinian Media Watch.