Palestinian propaganda works overtime when it comes to Jerusalem and its Muslim holy places. Jerusalem in general makes headlines around the world as an emotional and religious focal point for three religions, including the world’s billion Muslims.

Tension over the Temple Mount and its Al Aqsa Mosque garners international attention. The same has happened to the modest Shimon Hatzadik neighborhood – or Sheikh Jarrah, as it has come to be known – just a few miles north of the Temple Mount.

In recent years, there has been a heated legal battle over the question of who owns the homes in the Sheikh Jarrah neighborhood in East Jerusalem. The controversy has erupted into riots, incidents of violence and even an escalation of the Gaza border resulting in the outbreak of a rocket war and the IDF’s “Operation Guardian of the Walls” in May of 2021.

The Sheikh Jarrah neighborhood conflict has led to the notoriety of Palestinian activists Muhammad and Muna al-Kurd. They are twins from East Jerusalem who have succeeded, and are still succeeding, in arousing deep anti-Israel and antisemitic feelings among the progressive population in the United States, but less so in Arab countries. Arab states are preoccupied with their survival and interests and are fed up with the Palestinian issue. Only the naive West is still funneling money to corrupt Palestinian leaders.

See: Arabs Drop Yoke of the Palestinian Cause 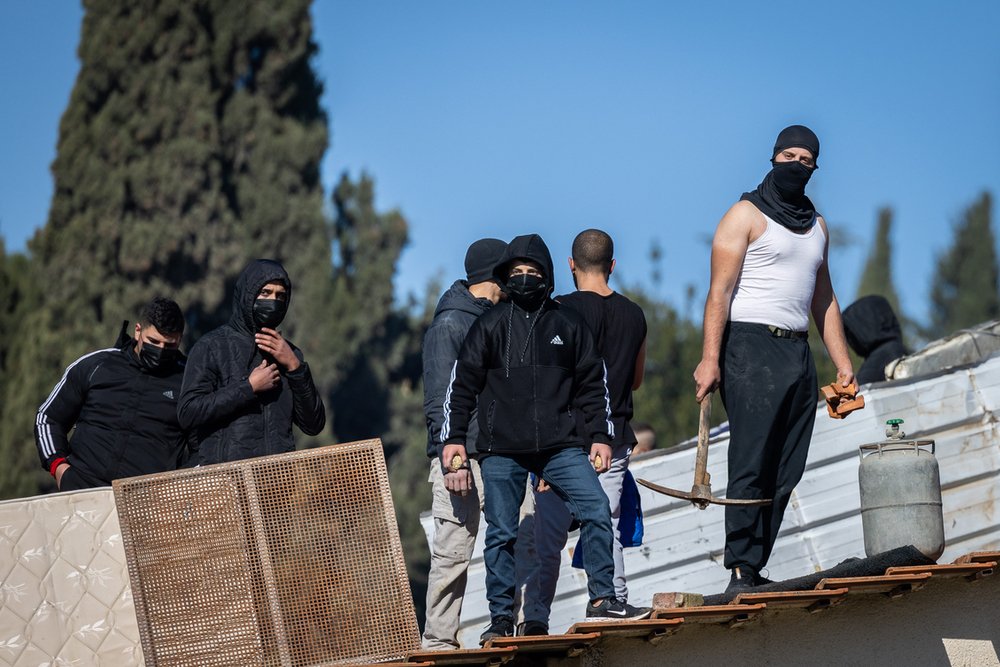 Palestinians with crude weapons and a gas canister resist eviction from a property they do not own in the Jerusalem neighborhood of Sheikh Jarrah. Photo: Yonatan/Sindel/Flash90

Back to the courtrooms and our headline.

Is the residents’ claim to ownership in Sheikh Jarrah valid?

A video has been brought to our attention featuring the Syrian journalist activist Maggie Khozam. She raises an assertive question: ”Where are the documents showing the [Palestinian] families’ ownership of the lands and houses in Sheikh Jarrah? Maybe there are none?”

Indeed, the documents that exist are rental agreements signed by the Jordanian government and mediated by UNRWA (United Nations Relief and Works Agency for Palestine Refugees in the Near East). 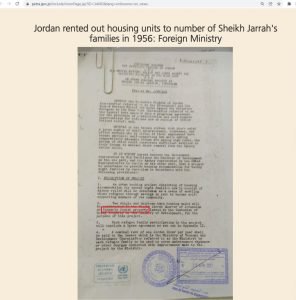 Note the highlighted section of the Jordanian rental agreement that identifies the property as captured Jewish property.

See one document right on the Jordan News Agency website here (in English). It states that the Jordanian government was using Sheikh Jarrah homes and land as rental properties to house refugee families, in ”the Jarrah Quarter of Jerusalem on formerly Jewish property leased by the Custodian of Enemy Property to the Ministry of Development, for the purpose of this project… Each refugee family participating in the project will conclude a lease agreement as set out in Appendix…”

In other words, the only legal ownership of the houses in Sheikh Jarrah is Jewish ownership.

Prior to 1948, the land of Sheikh Jarrah was undisputedly owned by the Chief Rabbi (Hacham Bashi) Avraham Ashkenazi and the Chief Rabbi Meir Orbach, after they “purchased it in 1875 directly from its Arab owners.” (Israeli Supreme Court language from 2009 in case number 23647/99 )

In 1948, during the Israeli War of Independence, Jewish citizens were evacuated from the Sheikh Jarrah neighborhood when Jordan took over the area; and it came under the jurisdiction of the Jordanian government’s Custodian of Enemy Property. Even the name of this Jordanian government body implicitly acknowledges the original and true owners of the property – it is the custodian of property belonging to the “enemy,” ie. Jews.

The same office, through UNRWA, rented houses in the contested neighborhood to 28 Palestinian refugee families, in exchange for a nominal rent (1 dinar per year).

After only about 20 years, in the Six Day War in 1967, the neighborhood returned to Israeli control along with the whole “West Bank.” The same Palestinian families who lived there did not accept Israeli sovereignty. They refused to pay rent for their homes, and the legal battles began lasting from 1989 until just recently when the Israeli Supreme Court ruled the families must vacate the properties.

This week the Jerusalem Municipality tried to evict a Palestinian family from one of the Sheikh Jarrah apartments, but the father of the family barricaded himself and refused to vacate the premises. He even threatened to burn himself and his children, and had the full backing of the Hamas media, which turned him into a hero. Late at night Israeli police arrested him and cleared out the apartment.

What is strange considering all the uproar is that the Jerusalem Municipality, which now owns the property, is planning to use the cleared land to build a school for autistic children who are Arab Muslim residents of East Jerusalem!

In spite of the original Jewish ownership, the intention is not to build something for Jews, but rather for the good of the Jerusalem’s Arab residents.

And still they protest.