Shooting inside the MV is an Israeli idiom that means casualties by friends shooting at each other in the very vehicle that is supposed to protect them from enemy fire. This is a gruesome image applied to people from the same political camp who are settling scores with one another regardless of the collateral damage they inflict on their own camp.

A week or so ago, in my column “Please Bibi, Why Don’t You Come Back?” I told the odd story of three leading right-wing journalists who published almost simultaneously the same opinion calling for Netanyahu’s resignation in exchange for a plea bargain. Rightly or wrongly, this quite surprising unanimity between leading right-wing journalists birthed speculation that Attorney General Avichai Mandelblit met these three and somehow convinced them that a plea bargain would best serve Israel’s interests.

One of those journalists, Kalman Libeskind, was livid by the talk of him turning a collaborator of Mandelblit. Such a meeting, he wrote, has never happened and those who suggest it are downright lairs. And since I, too, was misled to believe that such a meeting took place, this is the place to apologize for that piece of fake news.

But Libeskind wasn’t satisfied with just saying that Mandelblit didn’t brief him. In a column titled “The Dangerous Flowerbed: On the Weeds That Have Grown on the Margins of Right-Wing Journalism,” Libeskind went for an all-out attack never before seen in which he lambasted no less than eight right-wing “media workers,” as he referred to them, including the popular Shimon Riklin (pictured above) and Kinneret Brashi (who is not a journalist).

Alongside decent right-wing journalists who have somehow managed to find their way into the leftist mainstream media, writes Libeskind, “in the flowerbed sprouted undisturbed dangerous wild media weeds. People most of whom have never written a news item, never gathered information, never dove into an old archive, never spoke with a source, never verified a story … people who don’t understand journalism, who have no journalistic ethics.” On and on the assault continued, mercilessly, and just a day before Yom Kippur, mind you, and from the pen of a religious man.

Libeskind’s savage attack on right-wing “media workers” was enthusiastically embraced by his bitter leftist colleagues, who up to that point had ignored his damning, ground-shaking exposés on Supreme Court judges and the legal system. Amos Biderman, cartoonist for the extreme-left daily Haaretz, gleefully presented this cartoon on his Twitter account.

The cartoon shows Libeskind joyfully running away with the clothes of Yaakov Berdugo and Riklin, the two he has attacked more severely than the others. The Shofars the two hold in their hands refer to the way Israeli mainstream media relates to right-wing journalists. They are Shofars, meaning they are instruments, puppets of Netanyahu who only amplify his messages.

The assaulted journalists reacted just as savagely. Erez Tadmor, a former Netanyahu advisor, wrote: “For years our responses [to Libeskind] were restrained … in effort to avoid shooting inside the MV. And now, following his article [that suggested the plea bargain], when for the first time we dared to doubt Libeskind’s sanctity … he is spinning out of control. Little man.”

Yaara Zered, a former Likud member-turned-dangerous wild weed, tweeted: “It bothers Kalman Libeskind that I was a Likud activist who returned to her former occupation as a journalist. Say, have you heard Kalman anything about … (Shelly) Yechimovich (a journalist turned politician turned journalist) … this is what’s happening when Kalman is busy with himself instead of the big story.”

But the main stage was left for Shimon Riklin, who carries the entire right-wing Channel 20 TV on his shoulders. Riklin waited until after the Day of Atonement to launch his counterattack on Libeskind, which took 16 out of his 45-minute evening news show, a spectacle never seen before.

Riklin was obviously emotional, and his well-prepared speech was not an oratory masterpiece, and he didn’t really address Libeskind’s rage over the fake meeting with Mandelblit. For him this was a side issue. What bothers Riklin is how a leading right-wing journalist like Libeskind, with an ego the size of a football field, has become so preoccupied with the meticulous procedure of investigative journalism that he misses the big picture. 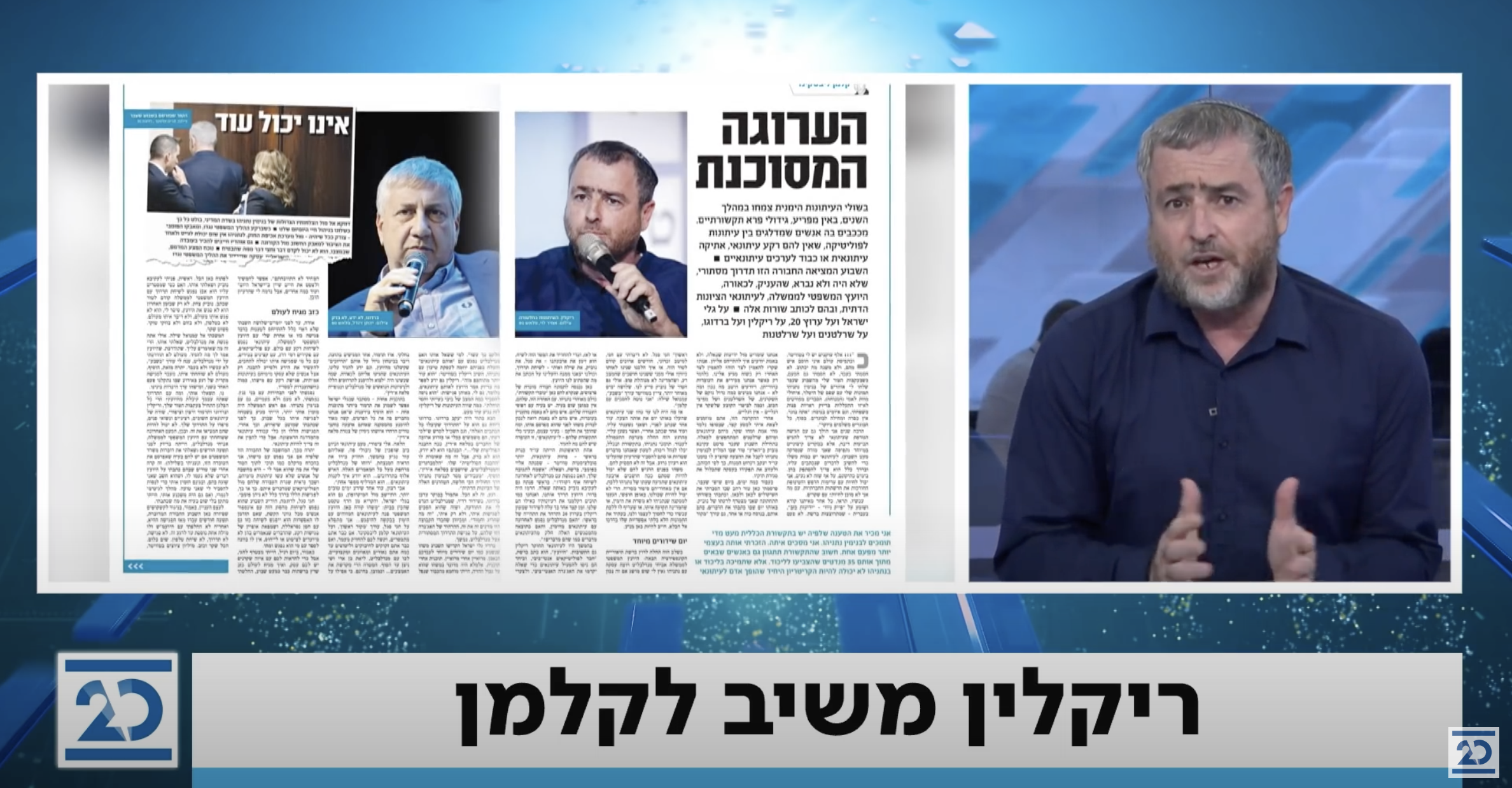 The thing that really needs explaining, he says, is why after the damning exposé of Libeskind on the legal system he comes up with the plea bargain idea, and why at the same time other right-wing journalists are suggesting the same thing. The probing into Libeskind’s motives is not only understandable, it is required. But Libeskind, says Riklin, can’t tolerate criticism, hence his demeaning attack on his former colleagues and friends.

Libeskind’s opinion is not the issue, says Riklin. It is Mandelblit, the Attorney General, who has become a political activist now trying to recruit right-wing journalists who want to topple Netanyahu. That’s the real story behind all of this latest commotion.

And speaking of journalists, Riklin divides them into three categories:

That last type of journalist is vulnerable to manipulations by their sources, who use them for their own ends. This is why Libeskind has found his way into the mainstream media. Ultimately, says Riklin, these types of right-wing journalists serve the old Israeli elite that has never accepted the right of the Right to rule Israel. In the final analysis, says Riklin, Libeskind has betrayed his higher calling to amend Israel in return for a clerical job in the mainstream media.

The outcome of this skirmish is a violent rupture in the small pool of right-wing journalists, many of whom are religious. This is clear from the reaction of the religious Erel Segal, who together with the religious Libeskind anchored the evening news show for Israel’s Kan public broadcaster. Following Libeskind’s “dangerous weeds” article, he decided to leave his longtime partner, and well-paying job, for the mediocre Channel 20 TV, which still hopes to be the Israeli version of Fox News.

Will this skirmish result in a new, more resilient kind of right-wing journalist, as Riklin is hoping for? Time will tell. For now at least, though many do appreciate Libeskind, it can’t eclipse the fact that, at least from the Right’s point of view, he behaves like a bull running amok in a China shop.