As a long season of Covid-restricted travel comes to an end, tourism in Israel is on the rebound.  Visitors to the Holy Land don’t typically think of it as a hiking destination.  But Israel’s outdoors has a lot to offer.

From the alabaster canyons of the Negev to the rolling hills of the Gilboa, there’s natural beauty to explore all around the country.  Besides being beautiful, a vast network of well-marked hiking trails makes Israel’s outdoors accessible, giving hikers an easy way to experience its varied terrain.

Of course, Israel is more than just a pretty place.  This Land has a rich history, dating back thousands of years.  On hiking trails in Israel, it’s not unusual to happen upon old ritual baths cut out of bedrock, olive presses, or a columbarium.  There are gravesites of ancient Biblical figures in local forests and remnants of Second Temple-era towns in nearby nature reserves.

All of this history turns an outdoor adventure into something more: a connection to the Biblical past.  Seeing the spots where ancient stories occurred allows us to understand our history on a deeper level.  We can visualize great Biblical battles and the terrain where they took place.  Or relive the everyday experiences of our ancient prophets.

Here are 5 trails to try when you want to take a deep dive into the lives of our Biblical predecessors.  On these hikes, you’ll gain new insight into the stories of our kings, prophets, and forefathers:

Jeremiah was a prophet who lived during the end of the First Temple period.  His mission: to warn the Jews that exile was near.  God sent Jeremiah on a mission to correct the nation’s sinful ways.

Jeremiah lived in the ancient town of Anatot, just above the Prat Stream.  Today, just beyond the town of modern Almon-Anatot, nature lovers can access the Prat Stream at the Ein Prat Nature Reserve, a spectacularly beautiful desert oasis.

In Jeremiah’s very first prophecy, God asked the prophet to identify a wooden rod.  Without missing a beat, Jeremiah replied that the rod was crafted from almond wood.  Most of us aren’t familiar with the particular grain pattern of each tree, save for maybe one or two varieties.  So how was the prophet so easily able to identify this finished rod?

Along the banks of the Prat Stream where Jeremiah lived, plentiful almond trees blossom in an explosion of white petals during the Hebrew month of Shvat in the Early Spring.  Since the Prat Stream was in his backyard, Jeremiah would have been familiar with the unique grain of the almond tree.

Further along in the book of Jeremiah, God asks the prophet to go to Prat Stream with a linen belt and conceal it in the rocks beneath the rushing water.  Returning to the spot weeks later, Jeremiah discovers that the belt has disintegrated.  God compares the belt’s fate to that of the Jewish people: like a belt once worn by God as his splendor, they have now become disintegrated in sin.

At Ein Prat Nature Reserve, you can take a long or short hike in the footsteps of Jeremiah, next to a bubbling stream within white canyon walls.  Along the trail, there are cool pools to jump into and rocks to climb. Fig trees and mint grow out of the water, creating a picture-perfect splash of greenery beneath white rock.  Simply put, it’s beautiful.  This was the prophet Jeremiah’s home turf. 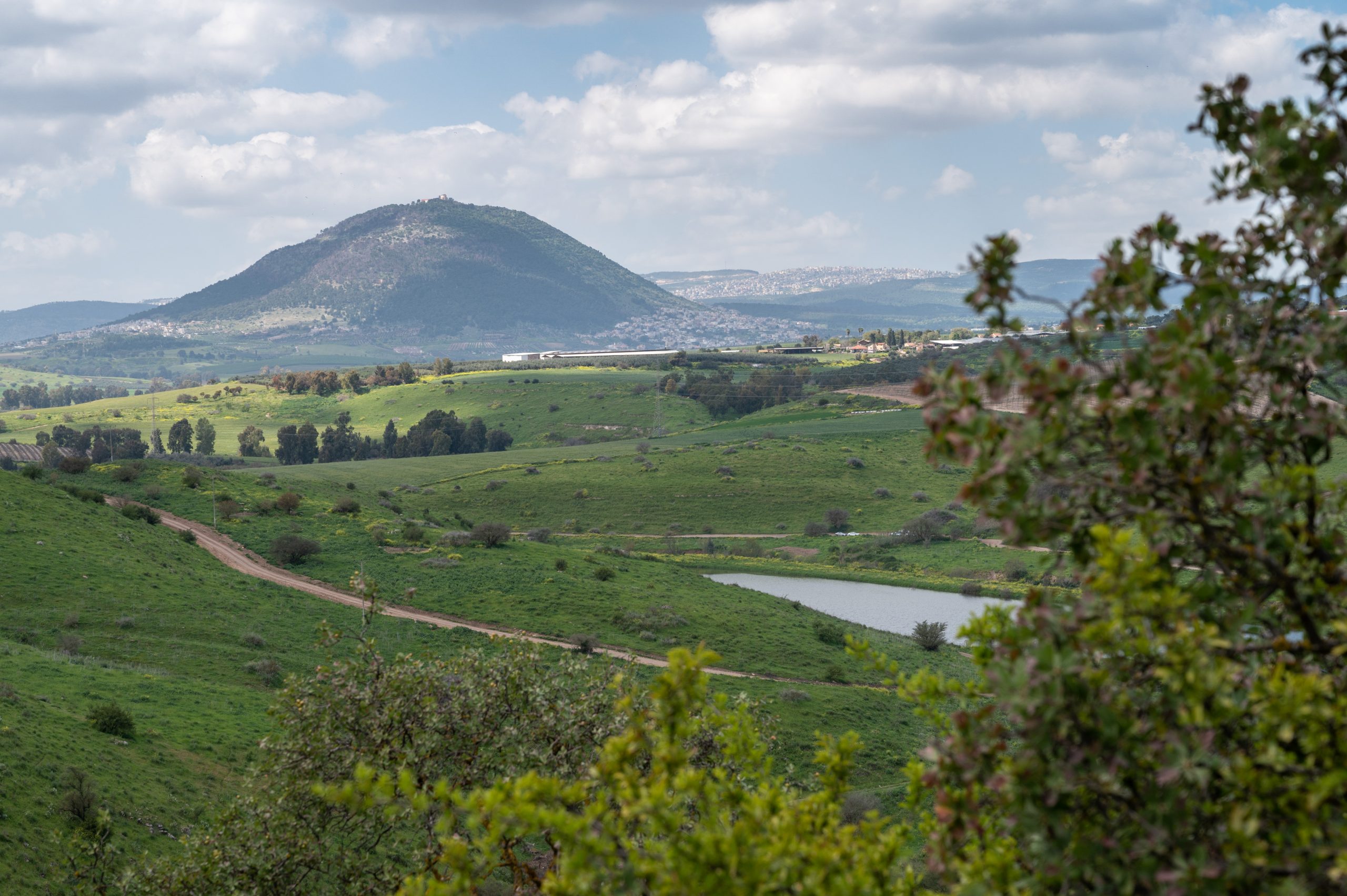 Har Tabor and the Tabor Stream

Our next Biblical hike takes us into the story of Deborah and Barak, from the book of Kings.  Deborah was a prophetess who led the Israelites on a mission to conquer the Land.  In an attempt to defeat Sisera and the Canaanites, Deborah summoned the general Barak with his army of 10,000 men to Mount Tabor.

Before the battle, things weren’t looking too good for the Israelite army.  The Jews were outnumbered and anticipated defeat by the great general Sisera.  But a miracle occurred at Mount Tabor.  God created a “confusion,” which some commentators classify as a thunderous rainstorm. This caused the stream at the foot of Mount Tabor to overflow and Sisera’s legion of chariots to get stuck in the mud.

The Jews won, Sisera’s army was defeated, and the great general Sisera was killed.

Today, Nahal Tabor in the Lower Galilee is a nature reserve run by the Israel Parks Authority.  From late January through early April, the trail at the Tabor Stream is one of the most beautiful hikes in all of Israel.  Lupines, anemones, and other seasonal wildflowers line the banks of a rushing river.  There’s a basalt waterfall in the middle, and rolling, green hills as far as the eye can see.

Just above the stream, Mount Tabor has its own kind of beauty.  An easy, forested trail encircles the mountain.   In the winter and spring, the trail is full of colorful wildflowers and greenery.

When walking these trails, it’s fun to envision how the story of Deborah and Barak may have taken place.  You can easily imagine the fierce rainstorm, the overflowing river, and the chariots stuck in the muddy banks at the foot of Mount Tabor.

Path of the Patriarchs

Ever wonder how Abraham traveled from the southern cities of Hebron and Beersheba to Jerusalem?  Even in those days, there were clearly defined paths which connected important parts of the country.  After saddling up his donkey, Abraham would follow these ancient paths to do God’s work.

In Gush Etzion, the Path of the Patriarchs is the ancient roadway traveled by our forefathers.  After Abraham’s time, the path was used by Jews traveling between the holy cities for generations.  Eventually, a ritual bath was built along the road, outfitted with an entrance for those who were ritually impure and an exit for those who had immersed themselves and become ritually pure.  In Roman times, milestones were erected along the path to further define it.

On a hike at the modern-day Path of the Patriarchs, you can walk in the footsteps of the forefathers.  The views out to the surrounding area – terraced vineyards, olive groves, and rolling mountains – are probably quite like the views they may have seen as they walked the path long ago.  Wild grapes, figs, and olive trees grow along the trail.

You can also stop in to explore an old cistern and the ancient ritual bath used by travelers on their way to the holy city of Jerusalem.  The Path of the Patriarchs trail takes hikers back in time to another era. 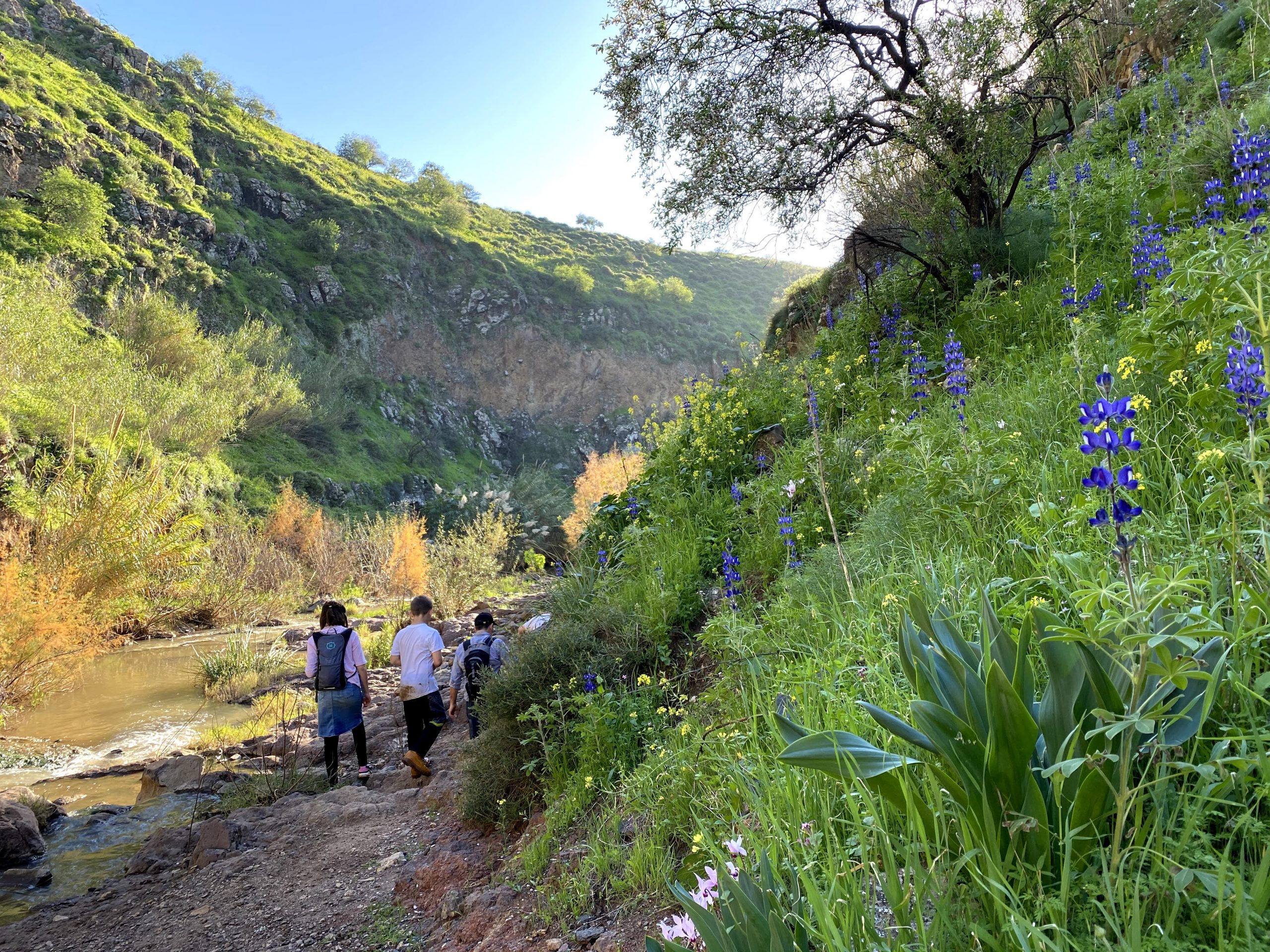 The unbridled beauty of the Land of Israel. Photo courtesy of Susannah Schild

Dan was an ancient Biblical city, described as the northernmost town in Israel.  The area was settled by – you guessed it – the Tribe of Dan.  This ancient city is now part of a National Park at the Tel Dan Nature Reserve in the Galilee.

At modern day Tel Dan fascinating archeological discoveries have been found, including a stone stele with Aramaic/ Hebrew inscriptions from 800 BCE.  This tablet is from the time when ancient Israelites settled there.  Old gates, buildings, and an altar were also uncovered at the site.

At the nature reserve, you can walk through the ancient city with the help of a paper pamphlet guide from the National Park.  Then, continue to hike through the rest of Tel Dan Nature Reserve, a green paradise surrounding the rushing Dan Stream.

The Dan Stream is one of the three main tributaries into the Jordan River; it’s what makes Tel Dan Nature Reserve truly beautiful.  Along the trail, there are waterfalls, little pools, and abundant animal and plant life.  A hike through the Tel Dan Nature Reserve combines nature and Biblical history into one awesome adventure.

If ancient Biblical cities are your thing, Tel Azeka in the Jerusalem Lowlands is another fantastic place to explore.  The ancient town of Azeka was mentioned numerous times in the Bible.  First, it is referenced as one of the places where the Amorites were defeated by a sudden hailstorm, during Joshua’s conquest of the Land.  Later, in the valley beneath Azeka, soon-to-be king David defeated Goliath during the Israelite’s war against the Philistines.

Mentions of the city continue through the chapters of the Bible, including when the Jews were exiled from the Land (Jeremiah) and when they returned to build the Second Temple (Nehemiah).

Modern-day Tel Azeka sits atop layers of ancient towns.  The hill is located right in the middle of Park Britannia, a vast KKL (Jewish National Fund) forest.  In the springtime, you can take a moderately challenging hike through lush beauty and plentiful wildflowers around Tel Azeka.  Then, continue to the top of the Tel, past cisterns and caves from the times of the Bar Kochva Revolt.

On top of Tel Azeka, hikers can explore archeological digs and stop at a display decorated with passages from Bible.  From the viewpoint at the top of the hill, you’ll look out upon many more important Biblical cities, including Tel Socho, Jerusalem, and Hebron.

A hike through Israel is more than just a typical outdoor adventure.  On Israel’s trails, travelers and locals can experience the beauty of nature while learning about and experiencing the terrain of Biblical history.  Seeing the places where our kings, prophets, and forefathers walked adds a new dimension to hiking in the great outdoors.