The airline is a strategic asset for the Jewish state, but now there’s talk of it either collapsing or falling into foreign hands

The coronavirus pandemic has destroyed tourism in Israel, and as a result, El Al, which by Israeli law has had to refund all cancelled flights that are not rescheduled, ended the first quarter of 2020 with loses of over $140 million. With 95% of the airline’s workers now on unpaid furlough, and all pilots, as well as all passenger and cargo planes grounded, El Al found itself on the brink of collapse.

Just this week, the government stepped in with a plan to nationalize El Al and save the emblematic airline until another solution can be found. Known as the “safest airlines in the world,” El Al was born in 1948 along with the State of Israel, but then privatized in 2004.

“El Al is too important to the State of Israel to ever be sold to a foreign country like China, as some are suggesting,” Victor Gregorian, Head of Security at Eilat’s International Airport told Israel Today. “It must remain in the hands of the Jews,” he said. “Whenever there is a war, only El Al will bring thousands of our crucial reserve-duty IDF soldiers back to Israel to fight.” 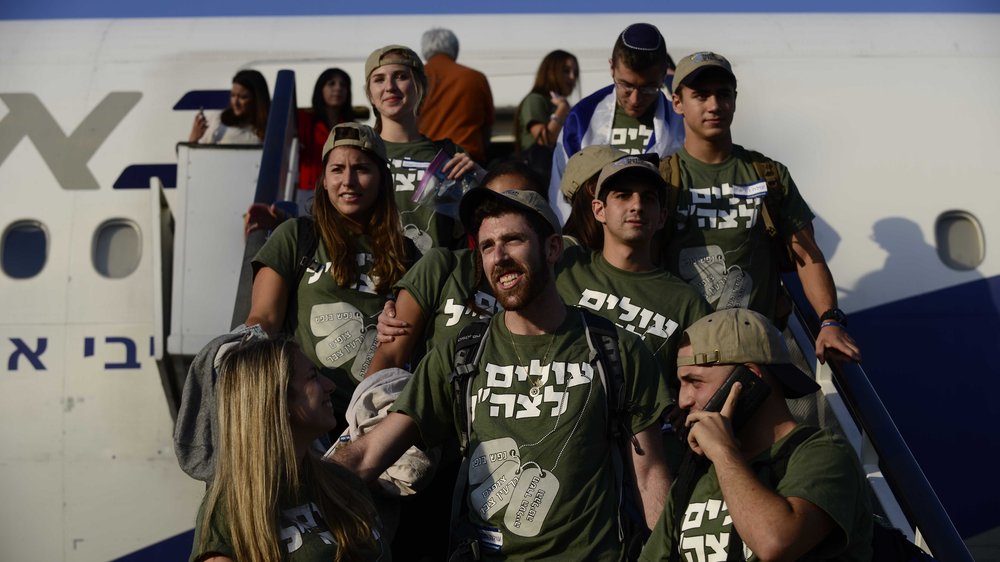 El Al brings new Jewish immigrants home, and helps return Israeli reserve troops during times of war. Sometimes, as shown here, it accomplishes both missions at the same time. These young Jewish immigrants are wearing shirts that read “Going up (making Aliyah) to the IDF!”

More than an airplane

The story of El Al is intimately connected with the Jewish people. Israel and Jews around the world share a deep connection with the blue and white aircrafts, donning the Star of David, as they have carried us faithfully through the turbulence of modern Jewish and Israeli history.

El Al’s maiden flight coincided with the birth of the nation in 1948 when it brought home Israel’s first president, Chaim Weizmann, from an important diplomatic conference in Geneva. Switzerland would not allow any military aircraft to land in its territory, so a military plane was quickly converted clandestinely and took off to return Israel’s president home.

One year later, in early 1949, El Al took part in another unconventional campaign dubbed “Operation Magic Carpet.” Yemenite Jews had somehow clung to their Jewish traditions for over 2,000 years, though being cut off from contact with world Jewry. They believed, from the prophecy contained in the book of Exodus, that someday they would be delivered from exile and get back to Israel “on eagles’ wings.” El Al planes, painted over with “Alaska Airlines,” were able to rescue the Yemenite Jews and bring them back home to Israel. 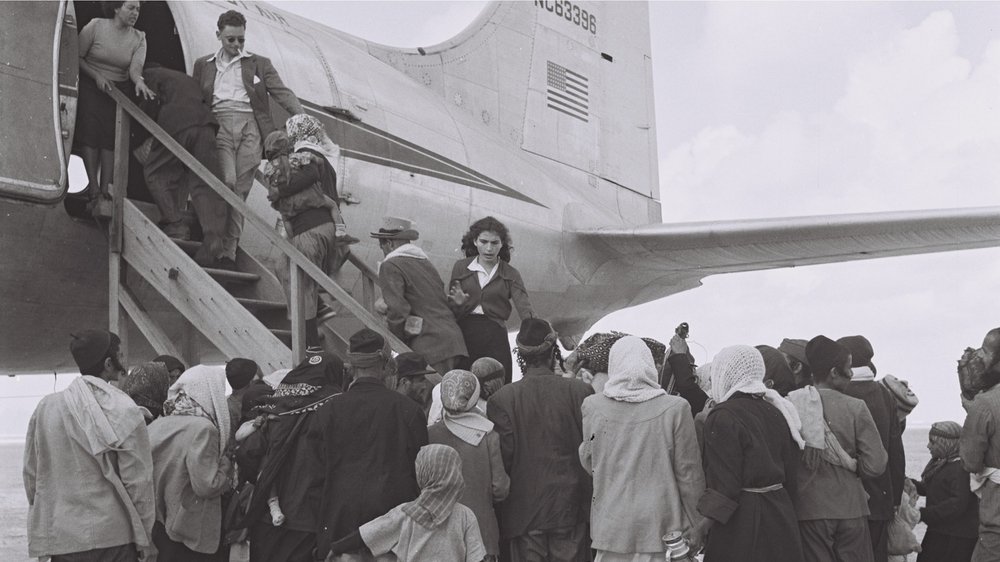 Israeli crew help Yemenite Jews board an El Al plane disguised as an American airliner in Aden, Yemen in 1949.

In the same year, David Remez, Israel’s first Minister of Transportation, named the young airline El Al, based on a passage from the book of Hosea: “ve–el al yik-ra-u-hu” — “And they (Israel) call to Him who is above” (11:7).

The airlifts from Yemen were followed by an even greater operation called Operation Ezra and Nehemiah (aka Ali Baba) bringing Jews to Israel from Iraq. Following persecutions of Jewish communities in March 1950, the Iraqi government wanting to rid itself of its Jewish citizens, encouraged Jewish emigration, on condition that Jewish property be turned over to the Islamic government. Eventually, 113,000 Iraqi Jews were rescued and flown to Israel. 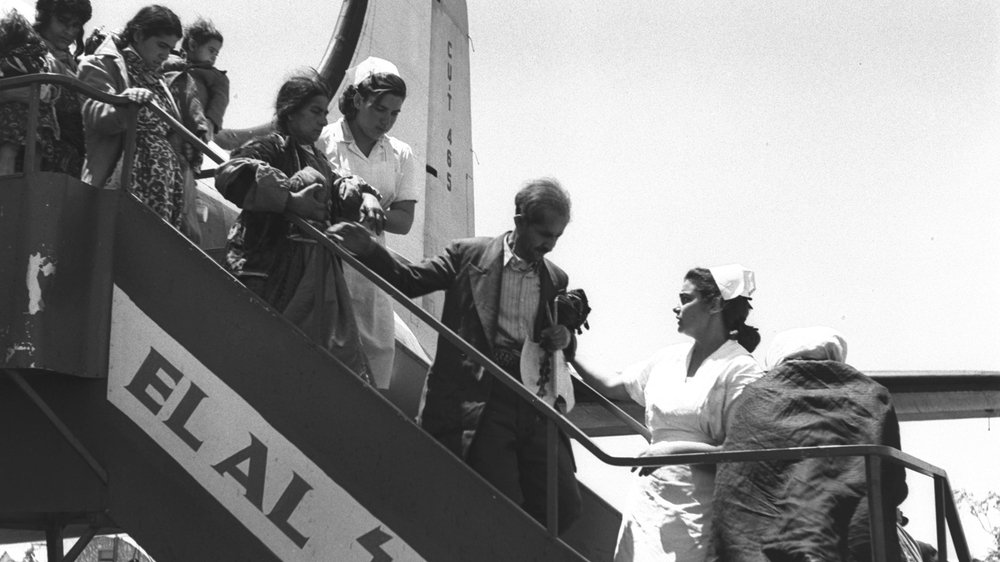 May 1951: Every three hours a plane was landing at Lod Airport (it was not yet called “Ben Gurion”) with rescued Iraqi Jews. Interestingly, those flights returned to Israel via Tehran, as Iran was at the time an ally of the fledgling Jewish state.

During the Yom Kippur War (1973), as the skies were closed and all flights in and out of Israel were halted, El Al alone maintained the only air link between Israel and the rest of the world. El Al also participated in efforts to airlift military equipment.

With the fall of the Iron Curtain in 1990, El Al began flights to the former Soviet Union capital, Moscow. Since then, more than a million Russian immigrants have made their way back to Israel, carried mostly by flights subsidized by El Al, the Jewish Agency, as well as Christians and Jews around the world who support Israel.

Not least on the long list of El Al’s achievements in Jewish and Israeli history is what happened in 1991, when a Boeing 747 carried a record number of 1,087 Jews from Addis Ababa, Ethiopia to Tel-Aviv. It was called Operation Solomon, and that initial flight was part of an operation that eventually brought about 51,000 Ethiopian immigrants back home to the Jewish state.

Ethiopian Jews crammed into a flight from Addis Ababa to Tel Aviv in a joint rescue operation conducted by El Al and the Israel Air Force.

Upon learning that a deal had been made to nationalize El Al in order to save it from extinction, Transportation Minister Miri Regev told the head of the El Al Pilots Union that “Israel will not allow El Al to go bust.” She also emphasized that the decision to nationalize is the “first step to place El Al back on the runway for as long as needed to maintain Israel’s aviation independence.”