It will not be news to many frequenters of Israel Today that an enormous disconnect – a very, very wide gulf – separates the vast majority of Christians from the vast majority of Jews.  And here I am not talking about the belief in Jesus as Messiah (which, of course, a relatively small number of Jews do hold). That distinction is the obvious one; it’s the answer that springs quickest to mind when asked, what’s the difference between a Christian and a Jew?

The chasm I am thinking about runs, in a way, far deeper than that one.  Jesus, after all, is Jewish, and He was an historical figure. What we differ on, mostly, is not His existence but His identity – not whether He was, but who and what He was. (You have quite likely heard the light-hearted one about what Jews will ask the Messiah when He arrives: “Is this your first visit, or your second?”) Nor do I have a question about why most Jews do not believe that Jesus is The One.  The Bible answers that for me.

As Jews begin the fast of Tisha b’Av this weekend, it is the Bible itself – the unlike way we Gentile Christians, and many Messianic Jews, read, identify with and embrace the written Word – that I am thinking about.  In this instance, when I say “the Bible” I am referring to the Tanach – the two thirds of our “Christian” Bible we appallingly call “The Old Testament”.

(If only we had never called it “old” – what tragedies could have been avoided; how different the history of Jewish-Christian interaction might have been. And if only we would stop calling it “old” today – how much sooner the healing of that relationship could begin, and how much we would learn about the origin and true nature of our faith.)

Unlike Yom Kippur, Rosh Hashana and the three great Feasts of the Lord (Passover, Pentecost and Tabernacles), Tisha b’Av is not a Scriptural calendar event. It was instituted by Talmudic scholars and therefore derives from Rabbinical, and not Biblical, Judaism. It goes without saying, then, that Christians – for whom the Talmud is not the Word of God – will not feel compelled to observe the fast of the 9th of Av.

What, then, am I talking about when I say we Christians are disconnected from the Word?  Surely, I am not arguing for us to read and apply the Talmud in our lives?  No, that is not at all the direction in which my thoughts are going.

They are more about where and how we feel connected, not primarily even to Israel as a nation, but to the One Who calls Himself the God of Israel, the One we Christians call “our God”.

It was our God Who blessed and entered that House in His sh’chinah glory.

Jesus, on entering the Temple, described it as His Father’s House (Matthew 21:13; John 2:16) and was “eaten up” with zeal for that House. His Father, our Father – our God’s House”!

Which brings me to the point. When I say Christianity is disconnected, I mean that most of us are basically insensible to these calamities, and so cannot respond from our hearts – not to the destruction of Jerusalem and its Temple, and not to the devastation visited upon the nation, which was eviscerated and scattered to the four corners of the world.

Perhaps we should just stop a moment and consider – as we go into this Shabbat, this weekend – that it was our God’s people, our God’s city and our God’s House that went through all of this destruction.  Maybe, if we just try to imagine how He must have felt as He saw this catastrophe coming upon His precious Israel. And how He has been feeling every day for 2000 years as He has looked upon the “abomination of desolation” and witnessed the never-ending suffering of His people.  In all their affliction He was afflicted.

Possibly, just possibly then, we will be able to let the sense of mourning touch our hearts, and bring some tears of empathic sorrow to our Gentile eyes.  We are to weep with those who weep. 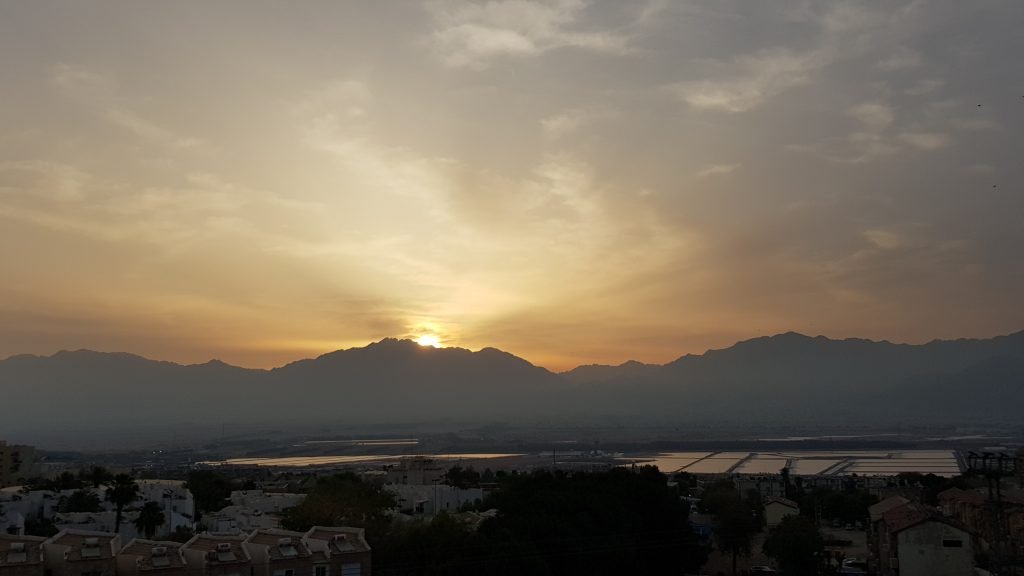 Arise, shine, for the glory of the Lord has risen upon you. Photo: Stan Goodenough

Yes, we are witnessing in our days the restoration of the nation, the rising of God’s favour over Zion that heralds the soon-coming of Messiah, the King of the Jews. And we can, we can from the heart, respond to the call to rejoice with her.  Isaiah 66:10-11 bids “all of you who love” Jerusalem to be glad with her and rejoice with her. All of us who love her – not just the Jewish people.

But read carefully. This invitation to rejoice with her is made to those who first “mourn for her”.