Central to his Sermon on the Mount with the fishermen and their families and the villagers from the surrounding seaside communities was for them to clearly understand that Jesus was not starting a new religion.

The “jot” is the Hebrew yod, the smallest letter in the Hebrew alphabet. The “tittle” is a minuscule crown crest atop the yod. In the Greek NT it’s an iota, the tiniest Greek letter. If ever there was a way to establish the absolute enduring relevance of every single word of the so-called “Hebrew” Bible, Jesus said it.

The Messiah’s sermon may be fully grounded in the Jewish scriptures, but certainly raises some serious questions.

“You have heard that it was said, ‘Eye for eye and tooth for tooth. But I tell you do not to resist an evil person. If someone slaps you on your right cheek, turn to him the other also.”

This happens to be one of most quoted verses by Jesus in modern Israel. I have had many conversations with rabbis and rabbinic students who like to tell me that this teaching by Jesus is a senseless sentiment in view of the Holocaust and Israel’s daily battle with terror. This sounds like pacifist pleasantry from folks looking for a Gandhi-like meditation, not the God of Israel and Lord of Hosts.

Many Christians misunderstand this teaching too, naively believing that everything is going to be OK, no need to resist evil. “It will go away if you ignore it” approach. Or man is lost and we’re all gonna be destroyed in the end, so why bother resisting. It’s not worth the trouble.

Let’s dig in and try to clarify what Jesus is saying to these rough Jewish fishermen and seaside merchants. 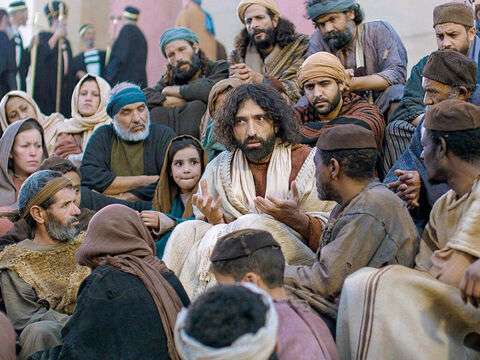 Jesus was not establishing a new religion, nor was he appealing to a progressive notion of pacifism. Courtesy of www.lumoproject.com

When Jesus says, “You have heard it said an eye for eye and a tooth for a tooth,” he is talking about how people abused lex talionis to exact vengeance on their enemies. But an “eye for an eye”  is intended to establish justice, not retaliation. If someone steals your donkey you get your donkey back, but no more than that. You don’t punch him in the nose and steal his donkey. The point is not to go around taking people’s eyes or teeth out, but fair retribution.

Jesus then gives three examples to illustrate what it means to “love even your enemies,” those who have taken unfair advantage of you, and each story refers to Roman oppression of Jews. Jesus knows firsthand, as do his tough fishermen followers, what it means to be slapped around and exploited by the Roman occupiers.

In the first example, a Roman slaps you on the cheek. Why would you give him the other one, too? Imagine for a moment you want to hit someone on the right cheek like Jesus says. Go ahead, try it on someone, gently. You can see that to hit someone on his right cheek you need to come in with a left-hook, not easy for the typical right-hander. What Jesus is talking about is how Roman soldiers typically humiliated Jews by slapping them with the back of their right hand on the right cheek. Easy now.

Dead Sea Scroll remains of Leviticus, which teaches Israel to exact and “eye for an eye.” Jesus tried to explain the true meaning of this to his followers, but many have misinterpreted his words. Photo: Shai Halevi/Israel Antiquities Authority

By “turning the other cheek” the Jew should stand up to the soldier, look him in eye, and say, “You want to slap me in the face? Humiliate me? Here is my left cheek. Hit me like a man, I am a human being, not your dog!”

Jesus is telling these rough Galileans to stand up to the evil, just not with anger and vengeance, which doesn’t help, but in a way that exposes the evil for what it is; arrogant bigotry in an oppressor who thinks he has the right to humiliate anyone he deems weaker.

To be clear, Jesus is not talking about what to do when someone attacks you violently or tries to kill you or someone you love. In that case you have every right and responsibility to protect and defend.

In his next story, he is talking about cases where wealthy Romans were taking advantage of poverty-stricken Jews.

“When someone wants to sue you and take your tunic, let him have your cloak as well.”

Wealthy landowners were taking poor Jews to a Roman court where he could literally take the shirt off the back of the poor fellow who couldn’t pay rent or a debt.

First century Jews and Greeks usually wore two garments, an inner “tunic” (khton in Greek), which is identical to the Hebrew kuttoneth, a shirt or undergarment worn closest to the body. And over that a himaton (translated “cloak”), a mantle draped over the tunic. When there was a need, the himaton could serve as the only clothing, and was often worn this way by philosophers and religious figures. 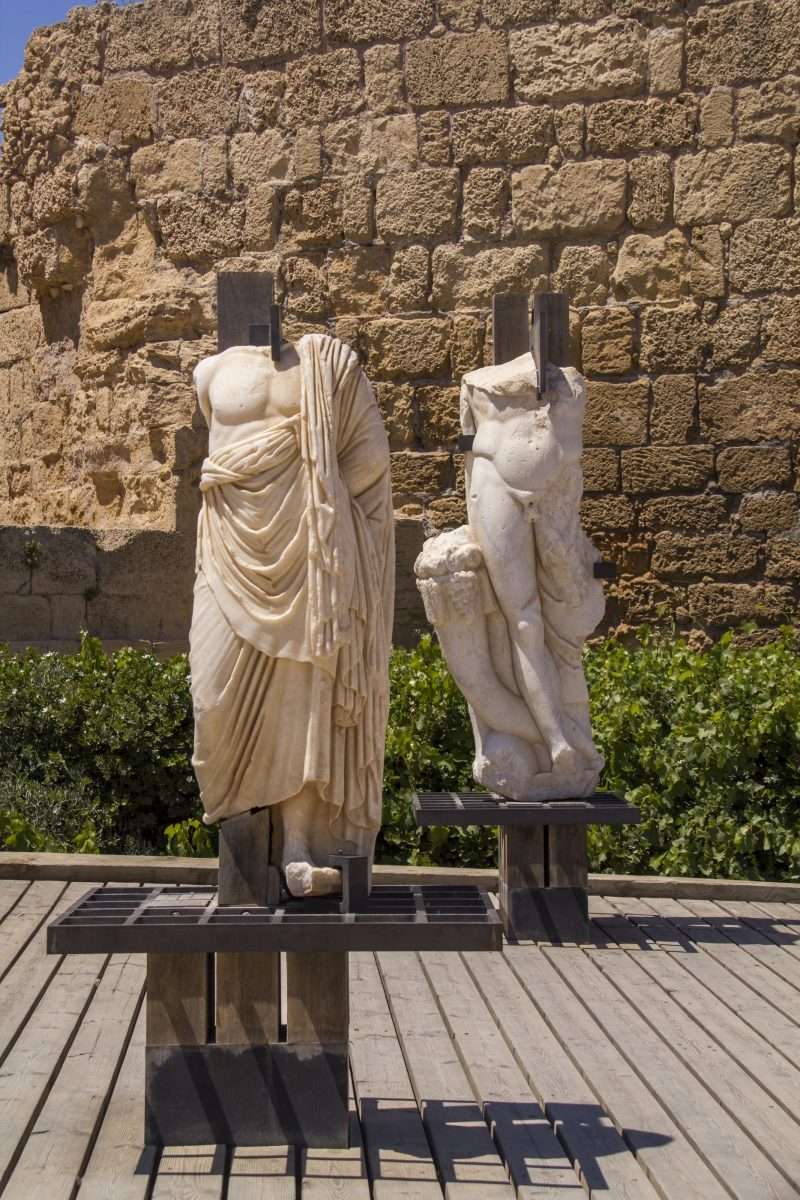 Examples of Roman tunics as seen on surviving statues in Caesarea. Photo: Shutterstock

Think of the judge and faces of people in court when this poor Jew says, “You want my coat? Ok, here, take my undershirt as well,” and he stands there naked before their eyes. What a great way to expose the wickedness of the wealthy, who would take even the shirt off the back of a poor man without conscience.

A similar Talmudic injunction says, “If your neighbor calls you an ass, put a saddle on you.”

The third illustration of what it means to love your enemy may be the most difficult of all. Jesus says:

“If they force you to go a mile, go with him two miles.”

This well-known story comes from the way Roman soldiers would force Jews to carry their equipment to the next Roman “mile” marker. This time the Roman “mile” gives away the Roman context.

But why should a Jew carry enemy Roman military equipment an extra mile? Isn’t this supporting the oppressors and occupiers beyond what they are demanding? I confess this one is hard to grasp.

Perhaps in this situation, facing an armed Roman soldier, the only reasonable, non-violent response an oppressed and humiliated Jew (and what humiliation to carry your enemies’ weapons for them!) was to give expression to his own free will. Against the powers-that-be, in a place where resistance is futile, and refusing to submit means death, a step in restoring the self-dignity of the oppressed is to stand up to the soldiers and show them your humanity. The principle is the same as the first two illustrations, only here the face-saving action seems to support the military advantages of the enemies of the Jewish nation.

In some ways this reminds me of the civil rights movement in the 60’s, when Blacks refused to lay down and cower under the beatings but kept getting back up until the oppressors’ conscience, and the conscience of the entire nation, forced a change. I admit that I can only hope that I may never find myself in the position where to “love my enemy” I had to suffer so.

My favorite example is the King of Denmark during WWII, who risked his life by wearing a yellow Star of David on his breast as a way of exposing the Nazi evil.

But of course, Jesus himself is the greatest example. Did it bother him that Romans were abusing Jews with slavery, prostitution, corruption and terror? Did it trouble him that his own Jewish leadership were corrupted and oppressing the poor?

How could it not, but he would not let the system corrupt him, nor use the crooked system to fight back.

Rather, he faced enemies with bold, conscience-pricking, sacrificial love. With purity aimed at corruption.

He taught to respond to evil not with vengeance, but neither with fear. To find an opportunity to expose and prevent evil. Not to injure because we are injured, nor humiliate, or take revenge. But to respond in creative and thoughtful ways to expose evil, challenge enemies, and demonstrate the sacred value of life.

Remember, you are the light of the world, he already told us in Part 4.