I’m here in Tiberias sitting in a nearly empty hotel lobby overlooking the Sea of Galilee, after strolling down the boardwalk promenade from the Scots Hotel compound, with waves lapping on my left and black basalt stone buildings on my right.

The “Sea” of Galilee is Israel’s only real lake; and Tiberias on its western shore, is Israel’s only city on a lake. It is called “Kineret” in Hebrew, transliterated in the New Testament as Gennesaret. The lake is full. Its cool blue waters are as high as I have ever seen them.

It seems to me that the Tiberias boardwalk is waiting forlornly for her Christian pilgrims from the nations to come back and visit her once more. The wooden boats that used to help pilgrims go “out into the deep,” today stand moored to the dock. Several of the restaurants and stores have gone out of business. A year-and-a-half of COVID blues have left the town struggling. Before the virus choked foreign tourism, well over a million Christian tourists came to the Sea of Galilee annually to watch the waves Simon Peter and his Rabbi walked upon. Next to Jerusalem, the Sea of Galilee is one of the main destinations for tourists coming to Israel. Every Christian tour in Israel passes through, and most of them spend a few nights here in Tiberias. 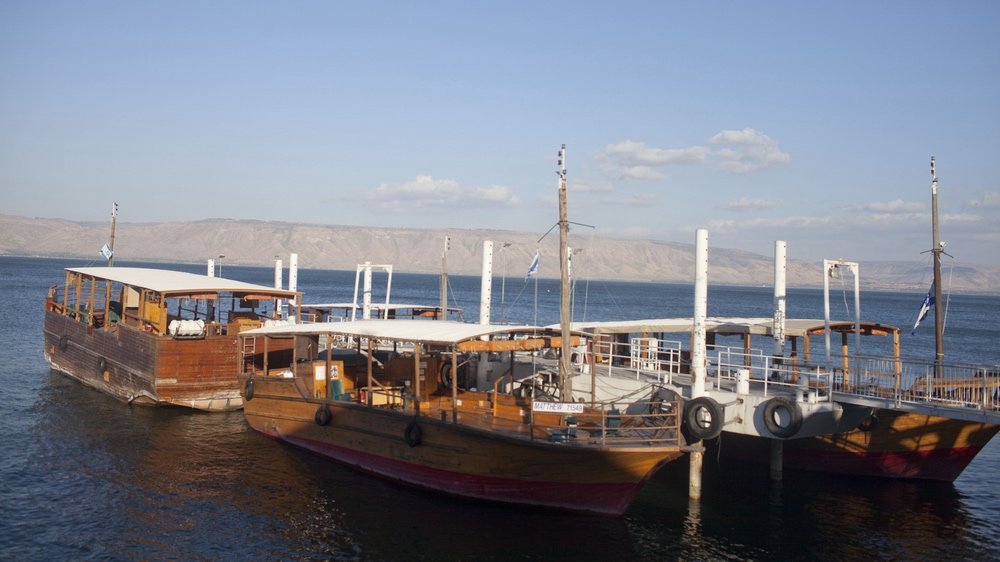 Often referred to as “Jesus boats,” they are ready and waiting for the return of Christian tourists.

The McDonalds on the boardwalk went out of business. About 100 meters further south, the stone minaret of an historic Muslim mosque rises skyward only to be dwarfed by the gleaming white Leonardo hotel. The municipal cleaning crew drags a water hose out onto the boardwalk, hesitating as if they had half forgotten how to use it.

Israeli vacationers are returning, hopefully in time to rescue some of the tourism-based businesses, now that the COVID restrictions are lifted.

A mourning in Tiberias by the Sea of Galilee?

As I walked along the mostly-empty lakefront boardwalk, I was reminded of a verse:

”The roads to Zion mourn,
because no one comes to her appointed feasts.
All her gates are deserted.” (Lamentations 4. Emphasis added.)

Tiberias is an enigma in any case. I have lived near it for over a decade. It’s a town with great potential, a city that arouses both affection and pity. The refreshing Sea of Galilee sparks national feelings of “ownership” and longing for Israelis, but maybe even more so for Christians. Tiberias is a curious mix of ultra-Orthodox Jews, young secular Israeli couples on the way to a weekend getaway, and exuberant Christian tourists on inspirational faith-pilgrimages.

As I sit here I suddenly recall a curious evidence of this almost-mystical New Testament affinity for the Sea of Galilee where so much of the Gospel happened.

Elvis Presley himself recorded this Gospel hit song in 1972:

Until very recently, it seemed to me like Tiberias was still holding its breath, trying to decide whether to become a modern, prosperous Israeli city or just hold on stubbornly to its dusty history of almost 2 millennia during which it housed a remnant of observant Jews as they tried to eke out a living here in spite of the Roman occupiers, then Byzantines occupiers, then Arab Muslim occupiers, then Turkish Ottoman Muslims and then the British.

Well, I have to pack up my laptop and go to my meeting. Here’s wishing you a great day, from here in the Galilee. And to any of you in the Nations considering a visit, you’re welcome to come back soon!