This past Sunday was Tisha B’Av, the fast day that commemorates the destruction of the two Temples in Jerusalem that once stood at the site where now two Muslim structures are located, the Al-Aqsa Mosque and the Dome of the Rock.

These two Muslim shrines were built in the 7th century for the purpose of expressing Islam’s superiority over Christianity and Judaism. Arabic texts on the walls and ceiling of the Dome of the Rock bear witness to this.

In 2021, the reality is no different and Muslims on the Temple Mount behave as if they have more rights to that sacred compound than other religious groups, and especially than Jews whom they routinely accuse of “defiling” the holiest site in Judaism. The 1,600 Jews who visited the Temple Mount’s courtyards on Sunday were again referred to by several Muslim states and the Palestinian Authority as “settlers” who allegedly “stormed” the Al-Aqsa Mosque. In reality, however, Jewish visitors have no interest whatsoever in Al-Aqsa and do not even try to enter it. 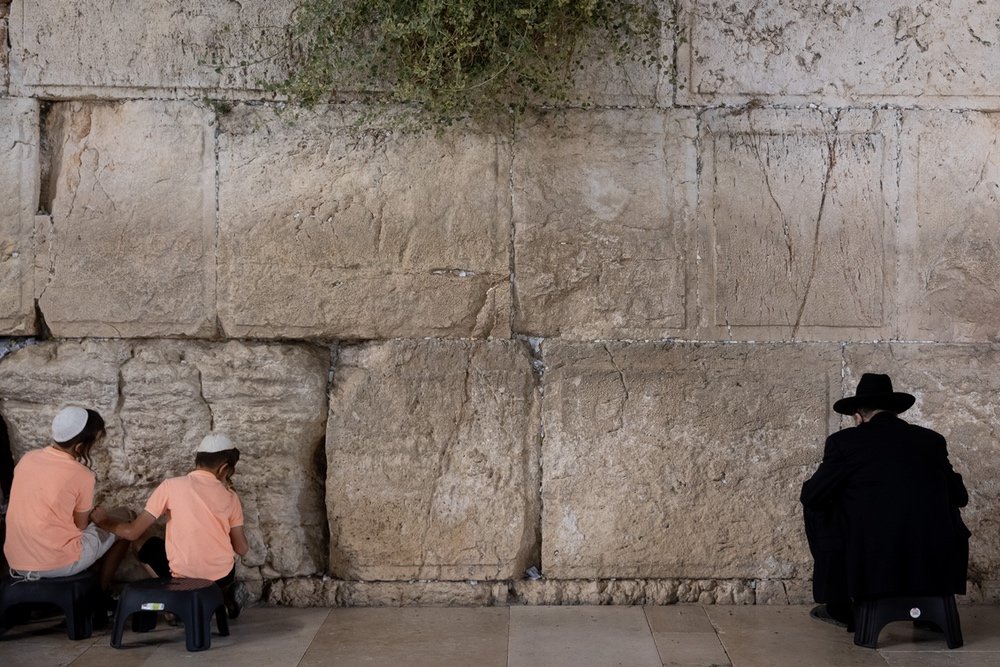 Tisha B’Av is a day of mourning for the lost temples, but also a day of hope for the Temple to come.

Israel was further accused of violating the “status quo” that has existed since 1967 when then-Minister of Defense Moshe Dayan made the blunder of handing control over the Temple Mount to the Muslim custodian known as the Waqf, just days after Israeli troops had conquered the Old City of Jerusalem.

Prime Minister Naftali Bennett this week contributed to the confusion and tensions with Muslim groups and countries. He first announced that Jews had the right to “pray” in their sacred place. In Israel, a message that was welcomed by the majority of Jews, but Bennett later retracted his words, saying through officials in his office that Jews had the right to “visit” the Temple Mount.

Nevertheless, quorums of the obligatory 10 Jewish men were formed on the Temple Mount to recite the prayers of Tisha B’Av. The Waqf, the Muslim custodian organization that still manages the Muslim shrines on the Temple Mount, tried to keep the Jews from praying, but the Israeli police prevented a confrontation.

Violent riots later broke out in which Palestinian Muslims threw stones at police officers and Jewish visitors. Israeli Arabs from the Lower Galilee town of Umm el-Fahm locked themselves in the Al-Aqsa Mosque and barricaded the entrance to the shrine. They then tore down a wall in the mosque to have stones on hand in case the police tried to lift the blockade, which indeed happened ahead of the visits by groups of Jews. 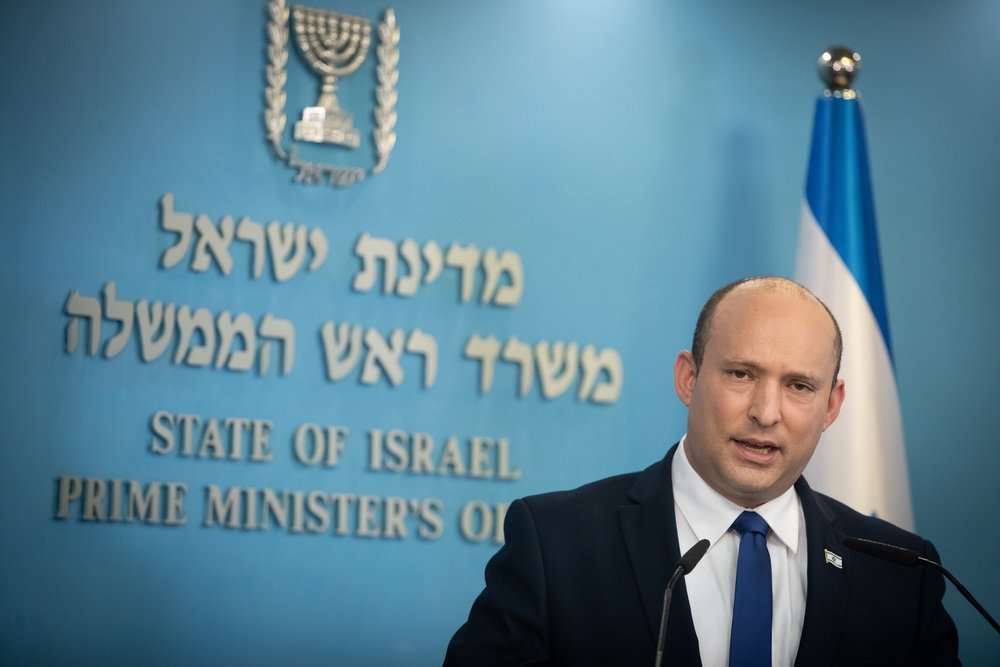 Bennett no doubt hoped his “government of change” could finally break the status quo at the Temple Mount, but was quickly put in his place.

The flip-flop by Bennett most likely had to do with the flood of condemnations that came from the Muslim world, including that of Ra’am, the Islamist political party that is now part of the new Israeli government, as well as from alternate-Prime Minister and Minister of Foreign Affairs Yair Lapid.

“The Al-Aqsa Mosque and dunams around it are the exclusive property of the Muslims and no one else is entitled to it,” Ra’am said in a press release. It marked the first time that the Islamist coalition partner went directly against its own government.

Ra’am also used the words “storming” and was annoyed that a group of Jews had sung the Israeli national anthem HaTikvah during their visit to the Temple Mount.

Ra’am further warned that the events on the Temple Mount could heat up the situation in Jerusalem and the entire region and even lead to a “catastrophic religious war.”

It again indicated that the Islamist party in this “government of change” cannot be trusted. 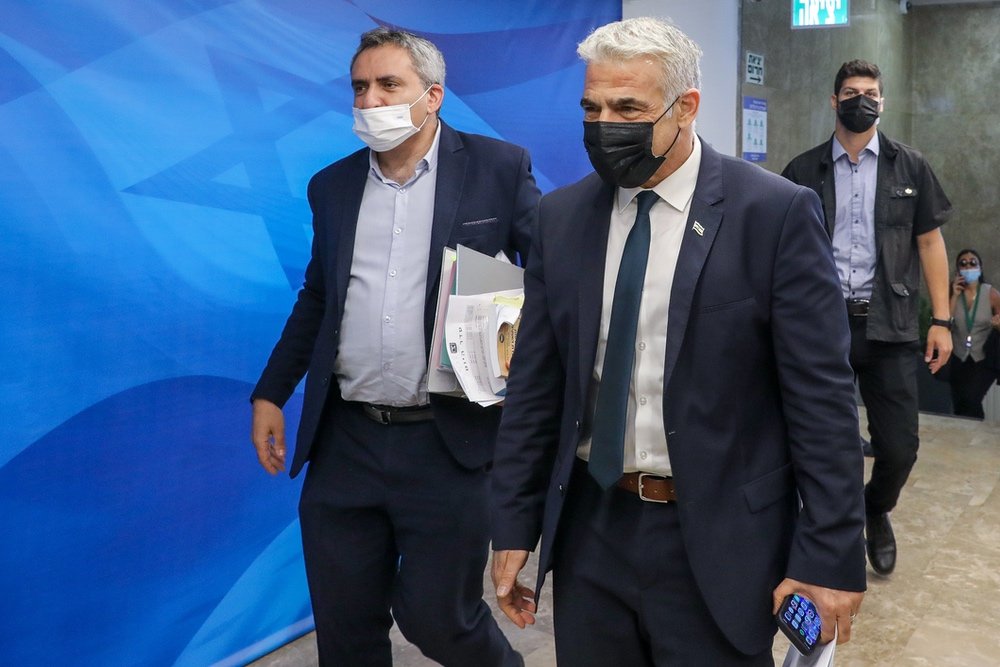 The power behind the throne. Lapid heads the coalition’s largest faction, and in two years will himself take over as prime minister.

Lapid disagrees with Bennett and intervenes

Bennett himself was silent regarding his about-face, declining media requests for comment. The media in Israel later reported that Lapid was the one who had spoken to Bennett and forced him to amend the content of his original statement.

It showed that Lapid, who is the leader of the coalition’s largest faction, Yesh Atid, is in reality much more than “alternate prime minister” and foreign minister. He’s the one pulling the strings until he replaces Bennett as prime minister in less than two years.

Lapid also contacted King Abdullah II of Jordan, who controls the Waqf and regularly criticizes Israel over the state of affairs at the Temple Mount.

The King refrained from issuing the usual harsh denunciations against Israel, but did condemn Israel’s actions in Jerusalem. This was probably related to the Bennett/Lapid government reaching out to him last week and agreeing to nearly double the amount of water Israel sells annually to the parched desert kingdom.

Bennett was later accused of pandering to the extremist Islamist party in his government and had Public Security Minister Omer Barlev talk to Michael Ratney, who is the new US ambassador to Israel.

Ratney wanted to know if the situation on the Temple Mount was under control, and Barlev replied that he didn’t know if things would yet spiral out of control.

There were fears that Palestinian terrorist movements in Gaza would violate the shaky ceasefire with Israel that has existed since the end of May and fire rockets at Jerusalem again. This happened earlier in May when Hamas started its 11-day war with Israel by launching seven rockets at Jerusalem after giving the Israeli government an ultimatum over control of the Temple Mount.

Ultimately, the Palestinian response came from Lebanon, where a hitherto unknown Palestinian group fired two rockets into northern Israel. The Israeli army responded with artillery. Nobody was hurt by the rockets since one of them was intercepted by the Iron Dome anti-missile shield and another fell in an open area.

A tense calm now reigns on the Temple Mount following Sunday’s clashes, which is likely to be blown away again during the upcoming Eid al-Adha Islamic festival that begins this week.

The tensions over the Jewish visits and prayers at the Temple Mount probably couldn’t have been avoided, but Bennett’s flip-flop should have been. It was the first time the new Israeli PM was really tested since he assumed office in June and, according to some observers, he failed to pass the test.