Israel Defense Minister Benny Gantz was in Bahrain this week. To call his visit to the small Gulf kingdom a success would be an understatement.

In addition to bolstering diplomatic ties and signing a defense coordination agreement between the two nations, Gantz also addressed the US Fifth Fleet headquartered in Bahrain, thus sending a clear message to nearby Iran.

Signaling that these warming relations run much deeper than the government level, Bahrain’s media was full of positive coverage of Gantz’s visit. 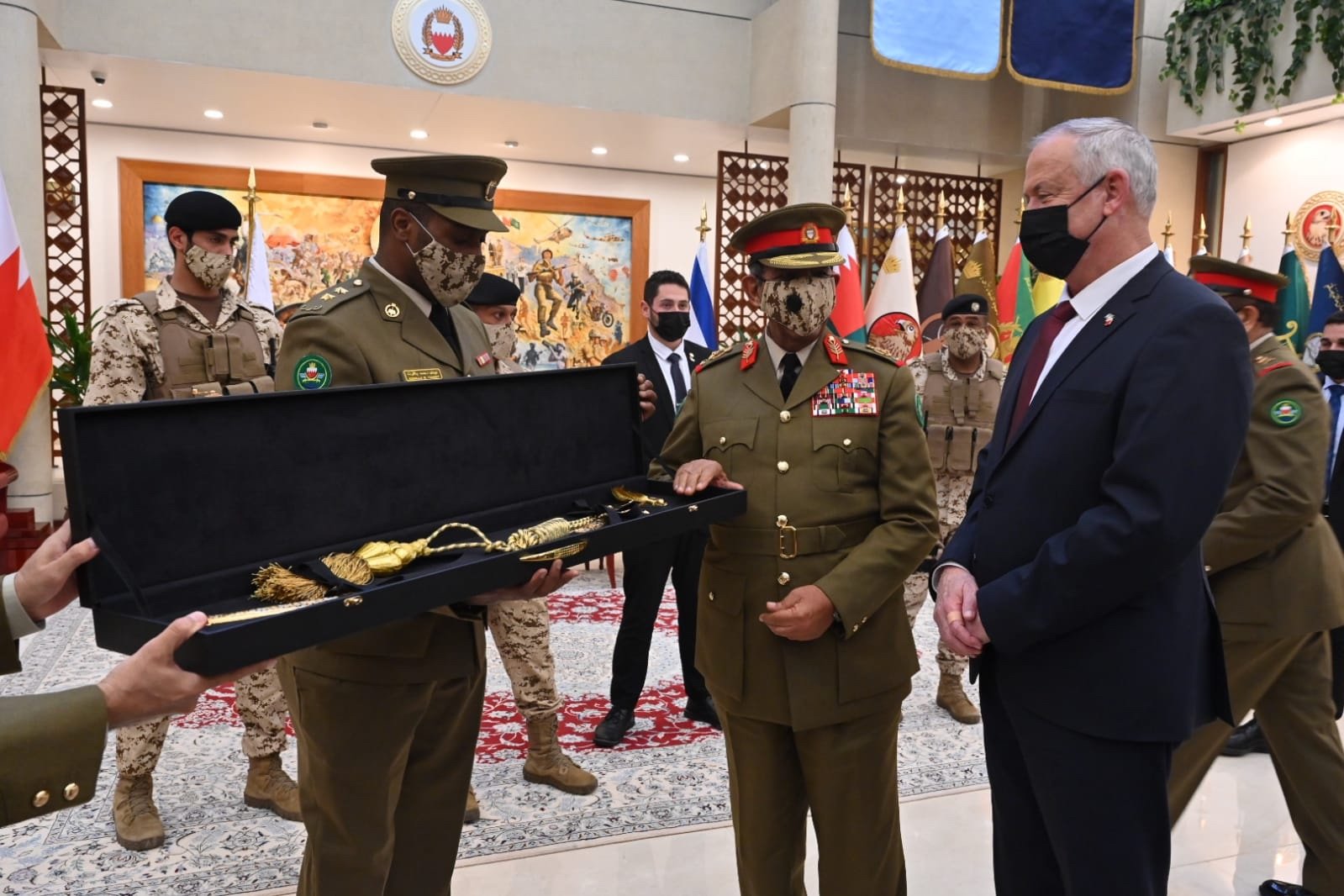 Gantz is presented with a ceremonial sword by Bahrain defense officials. Photo: Ariel Hermony/Ministry of Defense

The English-language Gulf Daily News even published a short op-ed by the Israeli defense minister. In it, Gantz wrote the people of Bahrain:

“Generations of visionary monarchs in Bahrain and Saudi Arabia sought a means to nurture and solidify the bond between the two kingdoms. They manifested their bond via a physical link – the ‘King Fahad Causeway’… It is an honour to visit the great Kingdom of Bahrain this week – the first official visit by the leader of Israel’s defence establishment. Although I did not come with an architect’s blueprint, I did come with the intention of building a conceptual bridge between Israel and the Kingdom of Bahrain – the ‘Abraham Causeway.’

“Just a little over a year ago, the courageous leaders of Bahrain, UAE, Israel, the US and our partners, drew up the Abraham Accords – the document that reshaped hope in the Middle East. A piece of paper with the scribbles and hopes of leaders, forged new ties between people, and opened the gates for economic growth, tourism, scientific and academic exchanges…

“We are forging a spiritual and cultural bond. It starts with the kingdom’s legacy of tolerance and integration of its small, yet thriving Jewish community, and it has evolved way beyond the island’s borders. A powerful example took place last week – I was deeply moved to hear of the Holocaust Remembrance Day ceremony hosted by the King Hamad Global Centre for Peaceful Coexistence. As the son of Holocaust survivors, such a gesture is so powerful in symbolising the growing closeness between our people.

“During this week’s visit, we have taken a historic step and built another layer in our bond. With the blessing of His Majesty, my Bahraini counterpart Minister Nuaimi and I, signed a landmark defence cooperation agreement between the Kingdom of Bahrain and the State of Israel. This agreement formalises our defence relations…

“Our region is becoming increasingly volatile. …Just as the State of Israel reserves the right to secure its citizens, assets and territory, so do we stand by our partners and support their right to defend their sovereignty and security.

“As I prepare to depart from the kingdom and look out at the magnificent skyscrapers and beautiful landscapes, I imagine the Causeway. I see two nations shaping their shared future. Now is the time to work together, to ensure that our people can prosper in peace and stability. Now is the time for the ‘Abraham Causeway’ – a bridge of peace, friendship and security between the State of Israel and the Kingdom of Bahrain.”