I don’t even know where to begin today. I should be happy to report on the beginning of a new political era. Yesterday was a special day. Israel got a new government. A change of government is usually a solemn moment in a democracy, no matter which side of the political spectrum is taking over. But yesterday the whole mood was completely different. And by that I do not mean the behavior of some Members of Knesset and outgoing cabinet ministers, who loudly protested and heckled during the special Knesset session. We expect a bit more decorum from our elected officials, but parliamentary democracy can be a raucous affair, and not only in Israel. If you can so inclined, you can click here and watch the entire affair with simultaneous English translation.

We have never had a head of government whose party only just passed the electoral threshold. A majority of his voters feel ripped off. When those who voted for Naftali Bennett’s Yamina party cast their ballots, none of them dreamed that he’d then go and facilitate the rise of a government that includes left-wing politicians like Tamar Zandberg and Nitzan Horowitz, leaders of the far-left Meretz party. 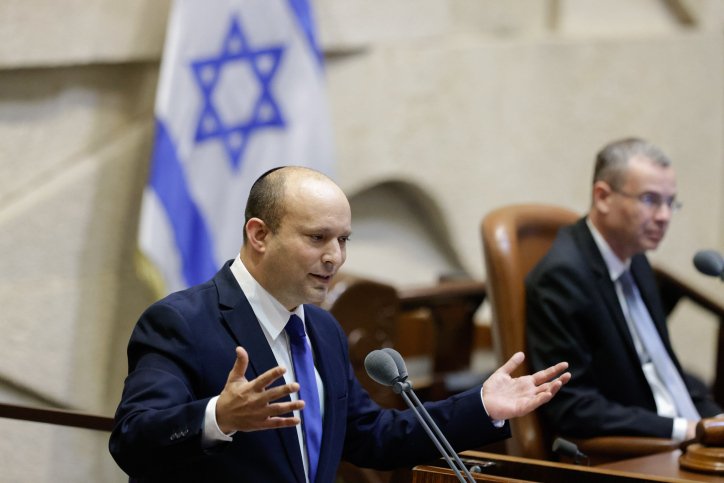 When Israel’s new Prime Minister Naftali Bennett stood to take his oath of office yesterday, I thought I saw in his eyes a clear recognition that he had stolen the votes of his constituents. That sounds a harsh, I know. Even if I can understand what led to this new “government of change,” the whole affair leaves something of a bitter aftertaste.

In the photo at the top of the page we see Israelis celebrating the establishment of the new government. However, I don’t think they are celebrating Bennett, their new prime minister, but rather the fact that Benjamin Netanyahu is no longer in office. That’s what this was all about for them. And that’s all that keeps some of the new government’s parties together, because on nearly all other issues, they oppose one another.

But in spite of everything, I wish our new government success. I hope to be happily surprised. Because more elections and political instability are the last thing we need.

The formation of the “government of change” also has a direct impact on the street I live on here in Modiin. The now former Speaker of the Knesset, Yariv Levin, lives a few houses away from us. As Knesset Speaker, he was afforded round-the-clock protection. Ours was probably the best guarded street in all of Modiin. But the will likely come to an end, because now our neighbor is just another ordinary Member of Knesset.