One would think that with him being so unprecedentedly pro-Israel, Trump’s loss in the US election is Israel’s loss. But these days “pro-Israel” is understood quite differently by rival Israeli political camps.

The Left, on the other hand, sees a pro-Israel president differently. He should fit the mould of Barack Obama, who is perceived by this camp as one who labored for a new kind of society in which all forms of bigotry are a thing of the past. And since the notion of a “Jewish” state is inherently bigoted, a pro-Israel president should urge Israel to become a progressive democracy focused on its democratic nature rather than its Jewish character. And he should compel the establishment of a Palestinian state. 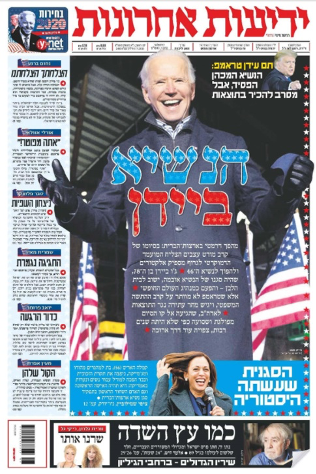 Considering the way bigotry is understood nowadays, Trump and his supporters are big-time bigots, because they still advocate for the patriarchy, the nation state, the notion of citizenship, things that make Republicans illegitimate by definition. This is why Democrats didn’t give Trump the benefit of the doubt for even one second. What he stood for was enough to say, “he is not my president.”

Israelis relate to Trump in much the same way. The Left loath him for the values for which he stands. The Right love him for the same reasons. This is why those who have discredited Trump from day one–supposedly because of his unconventional manner, his tweets, his offensive bluntness–would have discredited him anyhow, no matter how he had acted, simply because they hate not the person, but the things for which he stands.

This might explain why Israelis are unabashedly, and uncritically, copying and pasting the arguments of their American counterparts. The ample examples seen on the any media outlet demonstrate that these are not anecdotal. From the Right, Shai Attar writes: “Al Gore challenges George W. Bush’s victory – a celebration of democracy. Donald Trump challenges Joe Biden’s ‘victory’ – damaging democracy.”

Still from the Right, Yehuda Lavi, until recently a popular social media persona who now refuses to use Facebook, broke his boycott to write an incredibly pessimistic post, in which he also says that “if this deceitful coup passes, it will be the end of freedom, the end of the West, the end of prosperity. All of us will become slaves … serving the corrupt masters … and no one will be there to help us.” 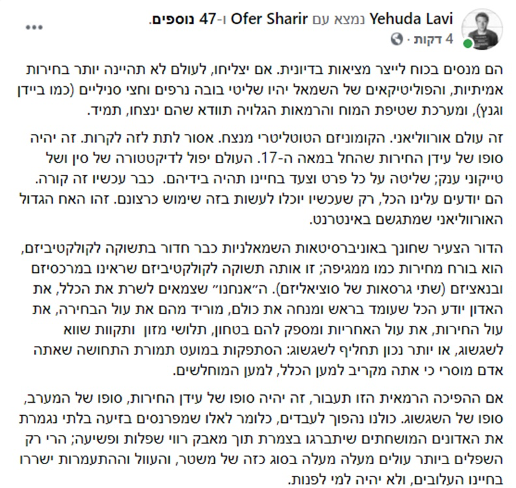 Political analyst Guy Bechor, who runs the Gplanet website, takes it for granted that the US election was rigged. In his article of November 5, Bechor reiterates Republican theories: “Even before COVID-19, the (Democratic) party’s establishment considered establishing a popular movement that would send tens of millions of engineered ballots through the mail, in order to sway the outcome in ‘rusted’ states … already controlled by Democratic governors and mayors.”

And “the shadow,” another popular right-wing social media persona, begins his post with a line from Hatikvah, the national anthem: “Our hope is not yet lost…that Trump will go on the offensive and succeed to prove fraud in court, in an election forever to be remembered as the biggest and most despicable election fraud in the history of the United States.”

And from the other end of the spectrum, Nitzan Horowitz, head of the Meretz party, expressed well the Left’s sentiments and hopes:

Meretz congratulates President-elect Biden and Vice President-elect Harris on their impressive victory – a beacon of hope to the entire world. After 4 years of lies and bigotry, it is time for honest leadership. May this be a sign for a similar victory soon in Israel.
יישר כוח pic.twitter.com/8G9H4TJ6b8

Micky Gitzin, executive director of the New Israel Fund, writes as if he is an American citizen who voted for Biden: “The speeches of President Biden and Vice President Harris were moving and unifying, focusing on social healing and the future of American society.” Gitzin, notably, didn’t even bother with “president-elect,” never mind that at present Biden has been declared the winner by the media alone, not by the relevant authority in this matter, which is the Electoral College.

That same brand of excitement can be heard from MK Yair Golan: “‘I’ll be the ally of light and not of darkness’ – this is what Biden said a few weeks ago. It is also time that Israel go out from darkness and into light, and the light doesn’t shine from the Right. If we are life-seeking, we should adhere to the values of progress … the time of anxiety has ended, the time of hope, renewal and building has arrived.”

Such tweets and posts, articles and interviews, show without a doubt that like America, Israel is also in the grips of a kind of a cold civil war fought over values one hopes will never materialize, while the other hopes they will be implemented tomorrow. As shown above, in Israel the “progressive light” strikes fear in the hearts of right-wingers. The only difference is that unlike in America, where the population is split right down the middle, in Israel the Right is still the unambiguous majority.